Do you use the hotel clock radios when you are traveling? I donâ€™t because I always have problems with them. Either I canâ€™t figure out how to set them, or they just donâ€™t go off for some reason. Iâ€™ve also had these go off in the middle of the night, thanks to some wise guy.

I thought I might be able to use my iPod Touch for an alarm, but there wasnâ€™t a way to check the time in the middle of the night. Power up your iPhone or iPod Touch in a pitch black room and youâ€™ll burn your retinas out.

I was intrigued when Kensington introduced the Kensington Nightstand Charging Dock (KNCD) for iPhone (and iPod Touch).

The KNCD is a simple charging dock that holds your iPhone/Touch in landscape mode. To complement this set up, Kensington has released an app named Rise&Shine for free in the app store. 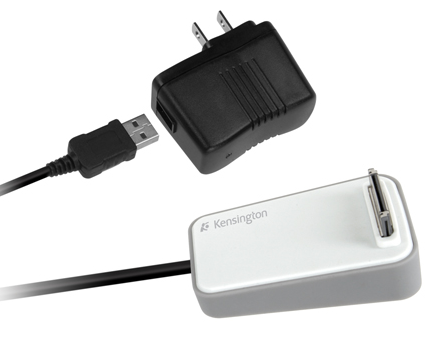 Plug your iPhone/Touch into the KNCD and prop it up on your night table, launch the Rise & Shine app and you are all set. It will even give you the local weather and it will charge up your iPhone/Touch.. 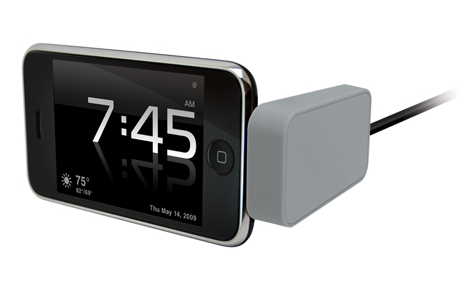 The app has several settings for color, screen dimming, and style of clock. To set an alarm, you use your iPod Touch/iPhone clock. Not sure I like that? Iâ€™d prefer to set everything up within the Rise&Shine app. 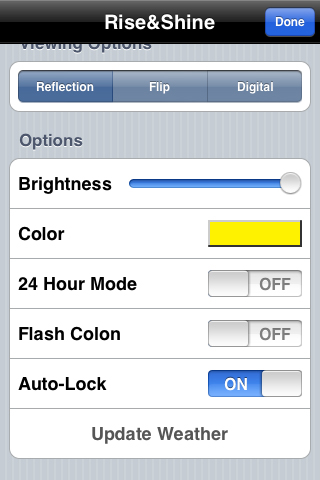 As you can see in the screen shot above, there are settings for brightness, color, clock mode, as well as different styles for the numbers.

I used the KNCD on a recent business trip and I did use the unit in my hotel room. It worked very well as an alarm clock. I liked the fact that while I slept, my Touch was being recharged.
What I did not like was the brightness setting. Even at the lowest setting, the screen is still pretty bright. However, in a dark, unfamiliar hotel room, this may be an advantage. I was able to use the Touch as a kind of night light in the middle of the night. At home, I could not make the screen dim enough to suit me.

Press on the weather icon and you get the local five day forecast. I had problems with this feature. Since I have an iPod touch, I would frequently see the screen below. 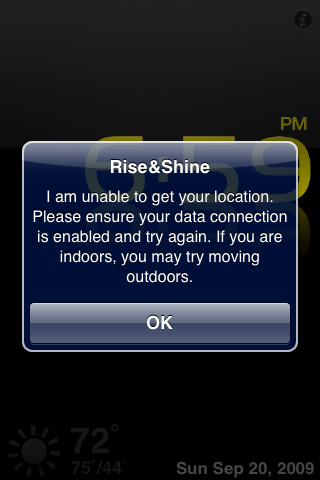 If you have an iPhone, Iâ€™m sure this would not be a problem. The first time I fired the app up, it gave me a forecast for a town about 60 miles away. Currently, it has improved and now gives me a report for a town that is only 35 miles away. It would be nice to be able to type in a zip code in the settings menu and have the KNCD retrieve that forecast instead. 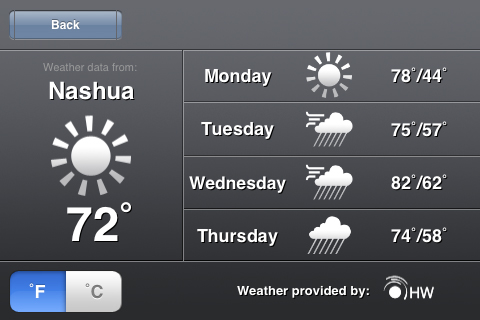 Overall, Iâ€™d say I like the Kensington Nightstand Charging Dock, and I think frequent travelers who donâ€™t want to mess with the hotel room alarm clock will want to consider buying one too.