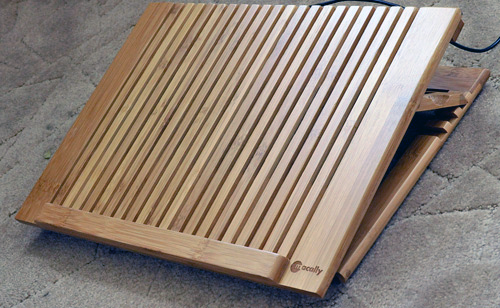 Macally ECOFAN Bamboo Cooling Stand for Laptop
Ecofan and EcofanPro
US $39.99 for either Ecofan or EcofanPro: Availability To Be Announced
Macally.com

The first thing that attracted me to the new Macally ECOFAN Bamboo Cooling Stand was that it was made from bamboo. Bamboo is not a wood, but a grass. It has incredible strength, both tensile and hard strength that is, pound for pound, stronger than steel. It grows very fast almost anywhere that’s temperate in climate, and is completely biodegradable, Hence, the name ECOFAN.

I like the styling of these stands. There are two models: The ECOFAN PRO stand, and the “standard,” which is just designated simply as ECOFAN. They are similarly well constructed. After close inspection, they are trim, sturdy, and finely crafted. I noticed nails in the underside frame. My first thought was “ugh, nails.” But looking closely I could see that they are quality nails, not cheap tacks or brads, and they are put in perfectly flush with the wood, neatly and cleanly. The whole unit is glued, I’m sure, and all the pieces are aligned and finished perfectly. The square gum rubber feet will keep your desk from any scratches or scrapes if you move the stand around occasionally. 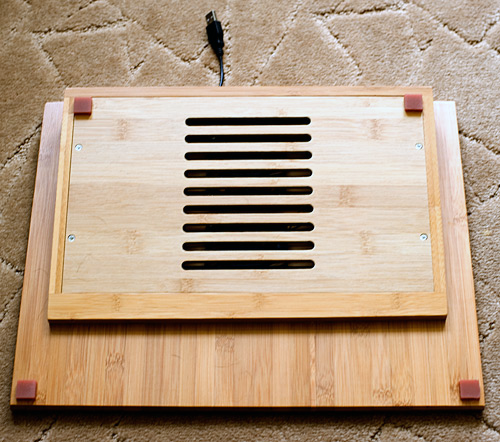 Underneath the unit is the box that houses the fans. Screws are used in construction of the fan housing. The PRO model has the fans sitting side by side horizontally under the length of the laptop. The standard model has the fans going one on top of the other vertically under the computer. That signals the thought that perhaps one model might cool better than the other, depending on where the fan is located in the computer. I kind of doubt it, but I’m sure there are some folks who are just so “tuned in” to the minutiae that the difference would be enough to decide the model for them.

The main difference, at least to me, is in the design of the stand itself. The PRO model adjusts to three different altitudes in the back via a swinging brace and three notches on the frame. The front is also built up slightly to accommodate the brace, thus raising the keyboard a little further off the desk. The standard model is one height only, and the front is lower and closer to the desk than the PRO model. Both units are compatible with any laptop up to 17″. They both have USB cables ( USB 1.1 and USB 2.0 compatible) which are 39 1/4″ in length. 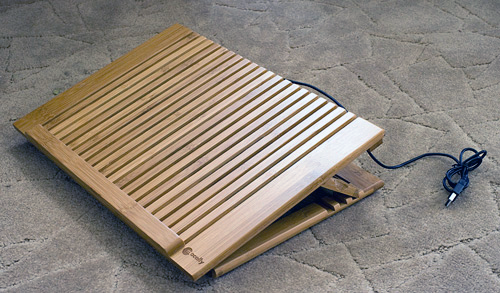 I’ve been using the PRO model for the past week. Today I started using the standard model. I like the standard one just fine. I don’t really need all that adjustment. But that’s me. YOU may need the adjustment. It’s totally subjective.

I like the way the fans work. They’re not totally silent, but they are very quiet; a faint hum, according to Macally, at around 23.5 dBA. I do notice them when I first plug into the USB port. By the time I call up my program of choice I’ve already forgotten about them. 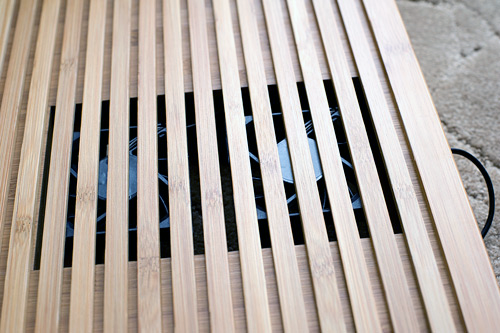 Do they cool the computer? You bet. Without them the fan in this old MacBook comes on after 20 minutes on Photoshop. When I plug in the fans before I start ‘shoppin’ the computer’s fan remains off.

I like these stands for all the reasons the company wants me to. They’re stylish, handsome, sturdy, practical, and ego-friendly. I would want one of these for my desk if I didn’t have one.

I would not try traveling with the ECOFAN. They are portable, but not practical for a lot of travel. Backpacking? No. Biking? No. I would find something lighter. These are substantial stands that are almost like furniture, which is how they’re made. They weigh in at 1.3 Kg each. That’s about 2.5 lb.

Conclusion: If the company is going for a beautiful and practical stand for the home that looks great, will probably last over years of usage, and cools the computer, they have succeeded. Therefore MyMac applauds ECOFAN for it’s offering, and making it ego-friendly to boot.