If you’re a typical Mac user, you’ve got more USB devices than USB ports. Usually thatâ€™s not a big deal. I mean itâ€™s not like youâ€™re going to leave your camera or iPod plugged in all the time. What do you do if you need to connect just one more thing? You get a Griffin SmartShare USB Hub. 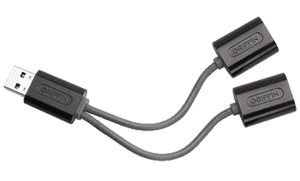 There’s really not much that can be said about such a simple device. It either works or it doesn’t. At first glance the Griffin SmartShare USB Hub doesn’t look like a hub, but the System Profiler reveals an ultra-slim two port hub powered by a Genesys Logic hub chip. Being that it looks more like some kind of splitter cable, it gets all its power from your USB port rather than an AC adapter. The potential problem with an unpowered hub is that USB devices that need more power, like a hard disk or the MacBook Air’s SuperDrive, sometimes won’t work. 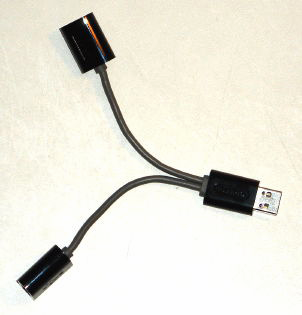 I’ve been using the the Griffin SmartShare USB Hub for 6 weeks. As long as the port I had it plugged in to provided full power (the front of a Mac Pro did not), all but one device I used worked. Hard disks, flash drives, iPods – you name it, it worked. The lone exception was the MacBook Air SuperDrive, which demands every bit of power provided and must be directly connected. Even a hard disk and a flash drive that sometimes brings built in USB ports to their knees worked flawlessly together. 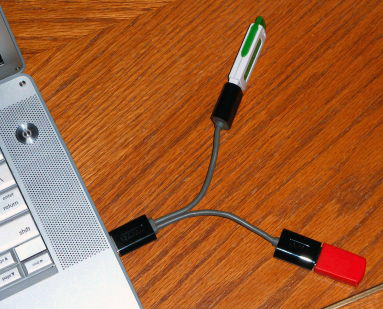 The Griffin SmartShare USB Hub is a great device for Mac road warriors, especially if you have a MacBook Air and need to connect multiple USB devices. I have to give it 5 out of 5 because it just works.

Griffin SmartShare USB Hub – 5 out of 5
Pros – It just works. Very compact. Perfect for road warriors.
Cons – None. You knew it only had two ports. Canâ€™t hold that against it.