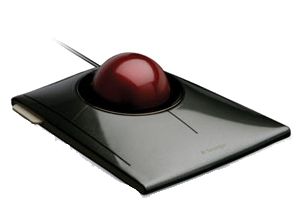 When I was offered the opportunity to review the new Kensington SlimBlade trackball, I jumped at the chance. Eons ago, back in the mid to late 80’s, I owned and loved one of the earliest Kensington ADB trackballs. It finally was put out to pasture when Apple discontinued the Apple Desktop Bus, but I got my money’s worth from a great accessory.

The SlimBlade is not your grandfather’s trackball. This is a splendidly constructed mechanism, with a cherry-red trackball that rolls and spins effortlessly. The case is made of a subtly speckled grey plastic, but the material is substantial, and there’s no cheap feel to it. The unit sits firmly on the desk, on four grippy pads, and the cable is over 36″ long, so it can reach almost anywhere. A nice touch is that the cable is wrapped in fabric, not plastic, so it has a good feel to it. At $129 the SlimBlade is pricey. Kensington has put together a great trackball, but how well does it work?

Unfortunately, the answer is “it works well, but it can be confusing to use.”

The trackball ships with a very short paper insert that tells you the barest essentials of how to use the SlimBlade, and to go to http://slimbladetrackball.com/ to download the SlimBlade’s driver installer software. Make SURE you read the insert! If you don’t install the software, the SlimBlade’s two lower buttons will still work; the lower left button provides the “mouse click,” and the lower right button pops up the normal Macintosh contextual menu. But who spends $129 for just a trackball with no extra features?

Why do you have to go the SlimBlade website to get the software? Why doesn’t Kensington ship and installer disk like everyone else? I posed this question to Kensington. They responded that they felt this is the simplest, easiest, and cheapest way to make sure the user always installs the most current version of the software. You don’t need to worry about getting an obsolete software version if the particular SlimBlade you purchase has been sitting on the shelf for a while.

I installed the software with nary a problem, except that after the installation I could not find any application software, no driver, no preference pane, or anything to tell me how to configure the SlimBlade. All you see after the installation is complete is a small SlimBlade icon in the Mac menu bar, and it’s easy to overlook. There is no separate configuration application to fool with, it’s all taken care of by the SlimBlade installer.

Unfortunately, I learned the SlimBlade software is not compatible with my 1st generation (2006) Mac Pro. To evaluate the SlimBlade, I had to install the software on my MacBook Pro. I discussed this at length with Kensington Technical support, but as of this writing, no fix had been published.

One click on the View Online Tutorial part of the SlimBlade icon in the menu bar took me to http://www.slimbladetrackball.com, where I learned how to use the SlimBlade’s two large and two small buttons. There is a lot more to using the SlimBlade trackball than is presented in the paper insert. Plan to spend time viewing the tutorial; if you don’t, you’ll probably have troubles.

Finally, I was making progress.

The SlimBlade has three main modes: Navigation, Media, and View. 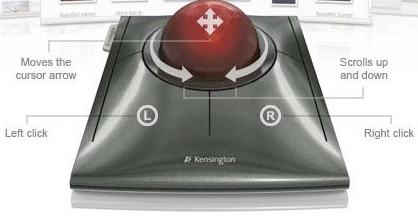 You change between Navigation and Media modes by clicking the upper-left button. When you change modes, two things happen; the mode’s icon appears on screen for a few seconds, then fades out, and the menu bar icon changes to show what mode you’re in.

Navigation mode is the default mode for navigating and simply moving the cursor. Rolling the trackball moves the cursor around the screen, as expected with any trackball. Normal mouse clicks are done with the lower left button. A click on the lower right button pops up the contextual menu. Clicking and dragging works normally. Kensington’s new wrinkle is that rotating the ball scrolls the window up and down, as though you were clicking in the vertical scroll bar. Rotating counterclockwise scrolls up, and clockwise scrolls down. This can be done even without installing the SlimBlade software.

Media mode allows you to choose iTunes tracks, control volume and Pause/Play audio tracks. The best thing about Media mode is that iTunes doesn’t have to be the front most application, or “have focus” in geekspeak, to be controlled by the SlimBlade. While composing this review in Apple Mail, iTunes was playing in the background (“Memphis in the Meantime” by John Hiatt). Without leaving Mail, I could click the upper right button to switch from View to Media mode. Once in Media mode, rotating the trackball adjusts the volume. Successive clicks on the lower-left button cycled though Pause/Play, and clicking the lower right button stops playback.

View mode is entered by clicking the upper right button. View Mode allows zooming and panning in certain programs. Just click the upper-right button to cycle between Navigation and View modes in supported programs. In Adobe Photoshop Elements, rotating the trackball zooms in and out. Normal rolling motions pan the image up/down/right/left.

Unfortunately, I learned the hard way that Elements was supported. After failing to get View mode to work in iPhoto 8, I found it was not supported. I had to spend considerable time trolling the FAQ section of slimbladetrackball.com to discover which programs were supported, as there’s no list on the box or in the paper insert.

View Mode on the Macintosh OS supports the following applications:

If your favorite application is not listed, you won’t be able to enjoy View mode.

iTunes is the only Mac application that officially supports Media Mode, although I was able to adjust the volume in QuickTime Player. However, it would not respond to Play/Pause clicks.

The lower-right button will pop up the standard Mac contextual menu in both supported and unsupported applications.

I spent quite a while trying to get used to the SlimBlade software. Even after practice, I found it hard to recall exactly what mode I was in, and would then get unexpected results from clicks. You spend most of your time in Navigation mode, but if you click into Media mode to adjust the iTunes volume you need to remember to click back to Navigation mode. If you don’t, the normal trackball rolling action won’t work, and you’ll be adjusting the volume when you expect to scroll up and down.

If this seems confusing, it is. Get into the habit of clicking right back to Navigation or View mode as soon as you’re done with Media mode. If you don’t you’re likely to get a bad case of mode confusion. However, the tutorials on the SlimBlade.com web site helped the learning process. If you are considering buying a SlimBlade, you owe it to yourself to check these out in advance of a purchase.

For me, even after practice, I never got comfortable enough to quickly switch between the various SlimBlade modes without regularly finding myself in the wrong mode.

Conclusion. The SlimBlade trackball is a fine piece of hardware, that suffers from difficult to use software, and poor documentation. More, and better, documentation should be provided in the box. The SlimBlade is not recommended unless you plan to practice enough to attain proficiency in changing modes, or you simply want an expensive, high-quality, plain-vanilla trackball to be used without the SlimBlade software.