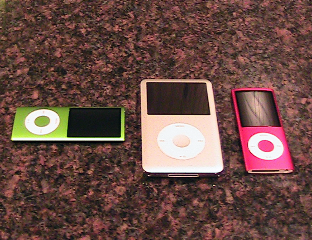 Doesnâ€™t seem that long ago that Apple revealed the 3rd generation iPod Nano (affectionately or in some case derivatively) called the Fat Nano. Oh waitâ€¦thatâ€™s because it was just last year. Not counting the iPod Touch (since thatâ€™s more of a crippled iPhone than an iPod), the 3rd Gen. Nano was the first other than the classic iPod line to be able to play video derived from your own digital video collection (using HandBreak or similar software to rip DVDs or acquired from iTunesâ€¦LEGALLY) and at the time I just couldnâ€™t see myself viewing video on such a small screen (measured 2-inches diagonally). Apparently I was one of the few with such issues as the 3rd Gen. Nano sold very well in 4GB and 8GB increments. What else could Apple do besides increase storage capacity? I mean, they certainly wouldnâ€™t completely change the design just a year later? Or would they?

By the time Apple announced the â€œLetâ€™s Rock!â€ get together in Cupertino for September 9th, there had been numerous fuzzy (patent pending) images on the web for the new Nano. Being the jaded semi-professional web journalists that we are, we had seen so many pre-product announcements for various pieces of Apple gear over the years that we viewed these with a grain of salt large enough to choke a horse. Much to our surprise the pre-release pictures were absolutely correct and just about everything Apple announced that day was already known. I guess even a blind squirrel gets the nut once in awhile. 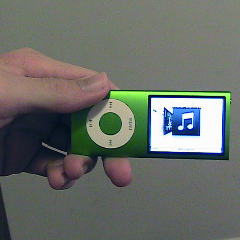 The colors for the new Nano are very bright. I bought a red one for my son for his birthday. He had been using my 1st Gen. Nano for awhile and I had promised him that if Apple came out with new ones on the 9th (his birthday is on the 7th) that I would get him one. My younger son had recently passed his 3rd degree black belt Tae Kwon Do qualification test and I had also promised him something special so I got him the green one. Both are the 16GB models and they are delighted with them. So much so that we can use them as possible punishments as in to take them away if they donâ€™t behave. Ah the joys of parenthood.

In pictures the new Nano looks much larger than the one it replaces. In real life it simply is much longer and skinnier. Imagine the 3rd Gen. put on a stretch rack and turned sideways. In more ways it resembles the 1st and 2nd generation Nanos than it does its predecessor. Letâ€™s talk about what Apple did to make this Nano better.

The screen (320 X 240 with 204 pixels per inch) is actually almost the exact same size as before, just made a little different to allow for a wide-screen (kindaâ€¦it is only a 2-inch screen after all) perspective. The previous model when playing wide-screen would either clip the left and right sides or present you with black bands on the top and bottom depending on your video settings. The 4th Gen. screen is a little longer allowing you to view the entire image mostly without this banding or clipping. Itâ€™s covered in glass and while you might think this would cause glare issues, it didnâ€™t seem like it was bad to me. The colors and contrast look great and other than the fact that itâ€™s very small, the screen itself is very impressive. Considering that the video files the device is playing are extremely compressed, you probably wouldnâ€™t notice itâ€™s hardly High-Definition until you played the same files on a much larger screen. Which I have done with the new Nano connected through an Apple Composite cable directly to a 720p Samsung 40-inch TV and the same files (purchased directly from iTunes) were washed out and listless in comparison. I could go off on a tangent about video file quality from iTunes, but this is about the new Nano so I wonâ€™t. Letâ€™s just leave it by saying that video on the Nano looks great with everything else considered. I know that doesnâ€™t sound exactly like a ringing endorsement, but trust me when I say that you will be impressed with how it looks as long as you donâ€™t expect a cinema experience. 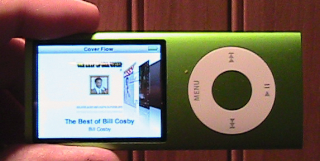 Sound quality is just as good as previous models. Real audiophiles naturally will be aghast by compressed music whether itâ€™s MP3, AAC, or Apple Lossless and wouldnâ€™t be completely satisfied unless the iPod could have a holographic image on an imagined soundstage with the speakers perfectly tuned just for them and I feel real sorry for them that it seems so important. Itâ€™s a digital music player guys. Just get over it OK? There are some digital players that have slightly better sound, but most people wouldnâ€™t be able to really tell the difference if their lives depended on it. Appleâ€™s earbuds are â€¦ well â€¦ Appleâ€™s earbuds. For some theyâ€™re just fine and for others, thereâ€™s a plethora of different headphones out there just screaming for your wallet to open.

The controls are exactly the same as almost every other iPod that came before it and the controls do not change when you turn it sideways. In either video or music, turning the screen sideways while looking at menus gives you CoverFlow to browse through your collection if thatâ€™s the perspective you want. Itâ€™s very smooth and pleasant to look at. There are other new control features as well. Apple has added an accelerometer to the 4th gen Nano, opening up a bunch of possibilities. Games for one. This is the type of technology that is in the iPod Touch/ iPhone and chances are most of those games will play on the Nano as well. The actual experience of playing those games wonâ€™t be the same because of the size of the screen. Another new feature is the shake to shuffle. Simply give your iPod a sharp shake and youâ€™ll go on to another song. Chances are you wonâ€™t see this for the iPod Classic anytime soon since sharply shaking a hard drive is a recipe for disaster. For those that jog or exercise with their iPods, casual movement isnâ€™t enough to move your mood from Mozart to Death Metal. The last significant feature in the controls to talk about is what Apple is calling Genius Mode. Simply put, it allows you to quickly make custom playlists from existing songs that have some similarity. So if your in a mellow mood, activating it while listening to say James Taylor might bring up whatever Jimmy Buffet songs you also have. On the other end, Ozzy Osbourne might also bring up Led Zeppelin or those 1980s hair metal bands you wonâ€™t admit to anyone you still listen to.

Battery life is probably about what you might expect. Apple claims 24-hours for music and 4-hours for video. Your mileage may vary. For extended trips in the car with the kids I would recommend a car power adapter or for long flights some kind of external battery. Theyâ€™re out there if you look on Amazon and other retail outlets. Most other video and audio accessories that work with the iPod Touch/ iPhone/ 6th gen iPod Classic/ iPod Nano 3rd gen will work with the 4th gen Nano as well.

In keeping with Appleâ€™s newly found advertised focus on being green, the packaging is about as minimal as it could be. Barely longer than the Nano itself, it also holds the USB 2.0 to iPod Dock Connector and standard Apple earbuds. Naturally Apple is boasting about itâ€™s greenness by proclaiming that each iPod is Mercury-free, PVC-free, that the aluminum enclosure is completely recyclable and that the screenâ€™s glass contains no arsenic for those that might want to lick it. Yea for us.

Zune fans will be delighted to know that there is still no built-in FM receiver in the Nano. I count this more as a feature than a drawback considering the state of radio in the US these days. No wireless syncing either which I find to be not that big a deal. If Iâ€™m in the same house as the computer that holds my content library, how hard is it to just go plug it in? I doubt itâ€™s worth the battery life that a WiFi enabled Nano would use but to each their own. I doubt Apple will add on-the-go content purchases or remote syncing as this would possibly cut into the feature set for the Touch/ iPhone.

So where else could Apple take the Nano? I think itâ€™s obvious that the iPod Classic with its big hard drive is eventually going to go the way of the dinosaur. Maybe Apple could expand the screen to 2.5-inches along with maybe 32 to 64GBs of flash storage? The danger there is that it might impede sales of Appleâ€™s more profitable Touch/ iPhone line, but who knows? After being an Apple customer for over 20 years and a writer about them for over 8 years, the one thing I can safely say is that it isnâ€™t safe to take a rock solid guess on what Apple might do next. 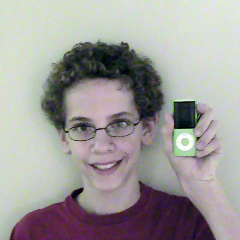 The 4th gen iPod Nano is a solid performer and as long as youâ€™re able to look past watching video on such a small screen a good value and worthy successor to the previous model.

MyMac rating: 4 stars out of 5