Prosoft bills Drive Genius as “THE industry standard disk utility for the Mac platform.” That’s a big claim, so I thought I’d have a look at the latest Leopard-compatible version, Drive Genius 2, to see if I could improve the performance of my 1.83 GHz MacBook. Short answer? Yes! Long answer? Read on…

OVERVIEW:
I sometimes tutor Mac users and offer help when things go wrong. Most problems I encounter are simply due to lack of knowledge, not hardware issues. I’ve also found over the years that average users hardly have a clue when it comes to disk maintenance. Most of them get by just fine, thanks to Apple engineering and the general level of component quality. That could change, though, as more and more people fill up their hard drives with digital media files.

Power users already know what I’m talking about: when you flog your Mac long enough, you may need a disk utility, and this one is truly comprehensive. Drive Genius 2 offers a suite of tools to keep hard drives running smoothly and dependably, including disk defrag, directory repair, repartition on-the-fly, device/volume cloning, integrity testing, benchmarking, secure erase, sector editing, and more. (Much more than I can cover in this review.) ProSoft says the app’s target audience is “anyone with a Mac who is interested in improving the speed and performance of their Mac,” but casual users won’t appreciate all this can do. 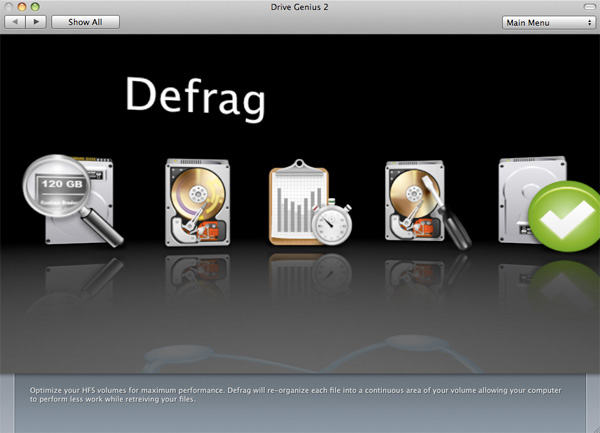 According to the manufacturer, “Drive Genius’s most popular feature is disk defrag. Drive Genius will optimize the drive by combining all the empty free space together into one contiguous block. This in turns improves the overall speed and performance of the drive.” Music to my ears, so for the purposes of this review, I decided to concentrate on defragmenting the hard drive to see if I could speed things up.

The test machine is an original 1.83 GHz MacBook with 2 MB of DDR2 SDRAM and a 160 GB Hitachi 7200 rpm hard drive with 67 GB of free space remaining, running OS X 10.5.4 with all current software updates, including applications. To get started, I installed Drive Genius 2, then cloned the disk to an external hard drive — not with Drive Genius, although I could have. The software comes on a bootable DVD, but I booted from the clone to optimize and test the MacBook. (Much faster that way.) And here is the app’s graphic representation of the MacBook’s hard drive before I started, with free space shown in lavender. This is a disk that according to Apple needs no optimizing, as I’ll elaborate: 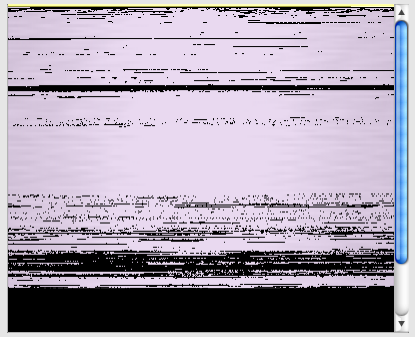 OPTIMIZING PROS & CONS:
That’s an unsettling image, but is what you see really a problem? In the years before OS X, periodically optimizing or “defragging” one’s hard drive was required maintenance, or should have been: I learned long ago the hard way by letting our old LCII’s drive get so fragmented, it actually died. This isn’t strictly necessary any more — Apple says you “probably won’t need to optimize at all if you use Mac OS X” and declares “there is little benefit to defragmenting.” Prosoft, on the other hand, argues that “OS X only optimizes files under 20MB. It also only optimizes the files not the drive, so even though the smaller files are optimized there can be empty space in between the files themselves.” Since Drive Genius 2 (or any other defragging utility) will combine those empty spaces into one contiguous block, one might reasonably expect at least a small performance gain because the drive head doesn’t have to hop around so much. Prosoft goes on to say that “Drive Genius 2 is also used at Apple’s Genius Bar in their Apple ProCare program for this primary feature.” Hmm.

So where does that leave you as a Mac user?

OS X does defragment files on its own, up to a certain point, and Apple says not to bother. Furthermore, defragging can cause problems in some cases — any time you perform digital voodoo on a drive, you flirt with the unknown, so BACK UP FIRST! I can tell you right now that I did defrag with zero agony, however. Besides, I like the idea of organizing data and free space into contiguous blocks. It feels better to me and ought to be more efficient. Since I’d cloned the MacBook’s hard drive and also backed up on another drive with Time Machine, I figured there was little risk.

BEFORE & AFTER:
Using Drive Genius 2’s benchmarking tool, I ran a few tests before I started. Chosen for a screenshot only because it was the last operation displayed, below you’ll see a bar graph of the random write test compared to results from a more recent 2.2 GHz Core Duo 2 MacBook with the identical 2 GB of memory, my results in green: 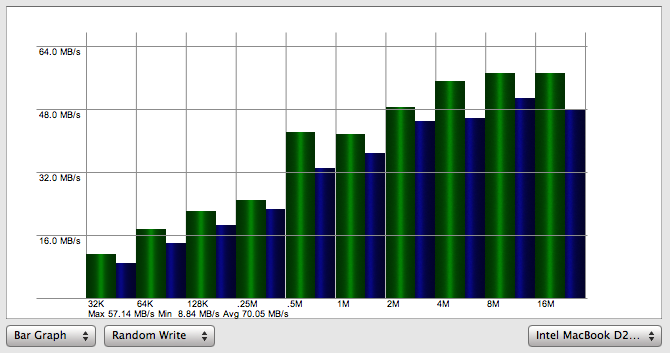 Yes, my older MacBook beats the newer one, probably thanks to that 7,200 rpm Hitachi drive. (Let that be a lesson to you if you’re thinking of upgrading, which incidentally is absurdly easy on a MacBook.) After defragging — which took about 80 minutes — the same test looked like this: 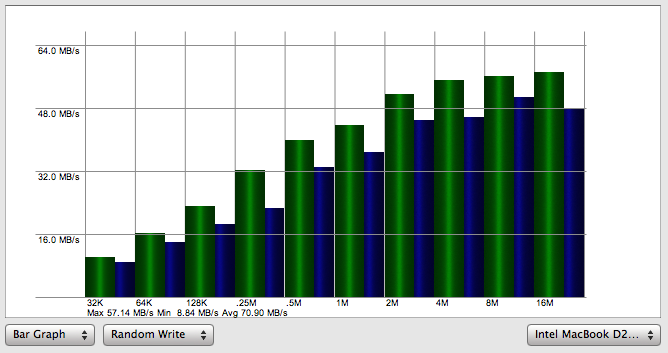 Very similar, but not the same. Let’s make those easier to compare: the red lines show obvious speed improvements, but some data took longer to write after optimizing… If you read the fine print, however, you’ll see that while the maximum and minimum write speeds are the same for both, the average speed before optimizing is 70.05 MB/s and 70.90 MB/s after:

An average random write speed increase of .85 MB/s may not sound like a lot, and a comparison using other test categories might be more relevant, but it is an increase. Benchmarks aren’t the only kind of measurements I took, however.

REAL-WORLD PERFORMANCE TESTS:
This is where the rubber meets the road: in actual use, would the MacBook actually run faster after defragging? Using a stopwatch, I timed each of the following operations three times, shutting down between each run, and averaged the results for startup, main app launches, and calculating folder sizes. Some small differences are no doubt attributable to operating the stopwatch and might escape one’s notice, but the shorter launch time for large apps is something else. Have a look:

EVALUATION OF TEST RESULTS:
I can unequivocally state that optimizing the MacBook’s hard drive (defragging) did result in an empirically-demonstrable performance boost. The distinction may be technical, but the machine does boot up more quickly and app launch times are consistently shorter. Not by much, but the results confirm Prosoft’s claim that optimizing speeds up the Mac, and I didn’t break anything. Your mileage may vary, as the saying goes, and whatever you do, BACK UP FIRST!

Does my MacBook feel faster? Well, yes — but that was my expectation, and the timings cited above are only rough measurements. Would I optimize again? Absolutely! Shaving even half a second off an app’s launch time is reward enough for me, and knowing I’ve done everything I can to increase efficiency is very satisfying. The psychology may sell more copies of Drive Genius than anything else, but numbers are numbers, and I’m not complaining.

FINAL THOUGHTS & RATING:
Drive Genius 2 is a powerful disk utility that does much more than defragment hard drives, and I very much regret not having the space or time to go into more detail on the other features. There’s a comprehensive PDF manual on the DVD, and based on my experience with an earlier version of the software, customer support should be top-notch. The app has what I consider to be a cool animated interface (you can turn this off if desired), ran without a single hitch, and fairly reeks of quality software engineering. There wasn’t a moment when I thought it was overpriced, and I’m glad to have it in my toolbox. System requirements are fairly standard: Mac OS 10.4.9 or newer, a DVD drive, 256mb RAM, and a 1.0 GHz processor minimum, while the user interface animations require Quartz Extreme support (G4 or newer).

Defragging is just the beginning, and hopefully I won’t ever need to use Drive Genius to find out why my MacBook died. Based on what I’ve learned so far, I happily give this app a 4 out of 5 MyMac rating.