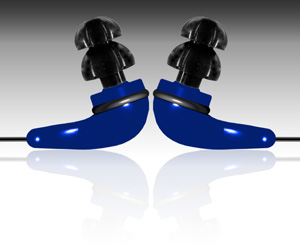 If anyone has read my previous reviews on inner-ear ear phones (Shure, Etymotic, Ultimate Ears, and V-Moda), they would know that I’m not generally a big fan of those type of audio listening devices. It’s not about the sound, solely. It’s that, and fit and comfort. And ultimately, value. But because of the design of this type of product, fit and comfort are half of the sound coming back to the listener. If they don’t fit right, the sound is tinny, and basically sucks. I’ve had to try sleeve after sleeve, and take a short course in ear-canal exploration to get some of them to fit/sound right. Even then there were those phones which just would not cooperate.

I’m glad to say I’ve met my spiritual sonic in-ear guru, atrio professional headphones by Future Sonics. These phones are the first I’ve found that fit me the way I believe the company would have it. And the amazing part is that the silicone sleeves that were already on the m8’s I received fit perfectly. They were comfortable and I could hear/feel the bass frequencies without pushing and pulling and manipulating them until my ears were raw. What a pleasure. In case your ear is not the same size as mine there are many sleeves included with the set, both silicone and foam, to accommodate just about any size ear canal.

Here’s the meat of the matter: Future Sonics has come up with a whole new technology called The Power of 1 which is “single studio-quality miniature dynamic drivers” designed and manufactured by Future Sonics. With this new design, Future Sonics claims that no “Enhanced” or “Boost” effects are needed. They also claim that the listener will experience high quality audio with “Bigger Sound @ Lower Volume.” There are two models in the line-up, m5’s and m8’s. The only difference is the color: 5’s are onyx black, 8’s are cobalt blue. I can attest to the fact that even at lower volumes these phones pack a quality sonic punch.

I cranked up the old Ipod and easily slipped the silicone sleeves into my ears. A little Levon Helm took my mind away to a soundscape garden. I could hear crisp, but not brittle, highs. The cymbals and tambourines glistened without puncturing my eardrums. The mandolin was warm and bright. The mids were actually placing the vocals where they needed to be without any boxy timbre. Lower mids were clear, as was the bass, which didn’t knock me out of my socks (an attribute that some ear-phone manufacturers think is “hip”). But bass isn’t supposed to do that. Bass is meant to support and give foundation to the other instruments, and that’s what happens with the m8’s. There’s plenty of it, but not that obnoxious overkill.

For those of you who love specs and numbers, here’s the deal:

One of the interesting aspects of Future Sonics is how the company got started. The founder and President, Marty Garcia, had a production company back in the 70’s and was working with renowned artist Todd Rundgren when Todd suggested that if he (Marty) could put the sound “in” his head then he’d have something. Garcia started experimenting with gel-based dental adhesive and ear bud drivers. He stumbled onto something after thousands of tries. Garcia says, “As more and more artists and engineers got behind what we were doing I developed proprietary transducers and custom casings with such strong success that I sold my production company at that time and started Future Sonics in order to focus on the Ear Monitor brand exclusively.” (Reviewer’s Guide.)

The people who use Future Sonics products are varied, from audiophiles to casual listeners, rock bands to TV shows. Here are a few names you might recognize: U2, Shakira, Fergie, Justin Timberlake, Keith Urban, Incubus, Maroon 5, Carrie Underwood, Greg Allman, Ricky Martin, and Brooks and Dunn. TV shows include The Late Show with David Letterman, The Tonight show with Jay Leno, Saturday Night Live, and Fox Sports. There’s more, but you get the idea. These guys ain’t kidding around.

I remember reading an interview with Anton Figg, drummer for The Late Show with David Letterman. One of the questions was about how it sounded to him in his ear monitors while he was working the show every night. Anton said, and I’m paraphrasing here, that they had the best techs, the best equipment, and the best sound. I remember that question in particular because at the time I read it I was working a club with no sound man and crummy monitors. I could only imagine what Anton was talking about.

So last week I gave the m8’s to my partner, Don Kelley, to wear for a week or so. One of many litmus tests. After the first song Don turned around and said, “These are the best ones you ever let me try. They’re real light so they don’t pull out. And the sound is real clear.” This is on a stage the size of the men’s room at Denny’s, with a four-piece band that can get fairly loud. All night he kept saying how much he liked the fact that he didn’t have to keep shoving them back in like the other one’s, which seemed to slip out. After a week I told him I needed them back. He didn’t want to give them up.

If you knew Don like I do you’d know that he’s pretty much unimpressed with just about everything. The fact that he showed any emotion towards these monitors tells me that he thinks they are as good as I think they are.

I have listened to Miles Davis’, “Kind of Blue.” And Randy Newman’s “Sail Away.” I tried the Shure SE 210’s and 310’s. These are good buds and I found them more than satisfactory in my review of those models. And both those recordings sounded wonderful on the Shures. But there is a clarity which is apparent with the Future Sonics m8’s that is not in the Shure sets. Maybe it’s the way the m8’s fit my ear. Maybe they really have something with their new technology.

I know one thing for certain. These are the best sounding and most comfortable set of in-ear monitors I’ve ever used. I don’t know if you can find something that sounds much better, but I’m going to have to ask, at what price?