Hi. Mr. Klutz here. But I must say I had some help klutzing the opening of the packaging of the Zefyr, Moshi’s new “high efficiency notebook cooler designed for MacBook 13″ and MacBook Air.” The way Moshi had the product sealed into its padded compartment caused me to try ripping the packaging to release it. That caused the all-too-familiar SPRONG effect, which ejected the unit out of the box and on to my kitchen floor. Oops!

Hey, I did that on purpose to see if the new Zefyr was built tough. It is! Thank goodness. Moshi sure has a thing about their packaging. Check out my past article in the MyMac archives – MOSHI CODEX MACBOOK SHELLCASE.

The only instructions on how to operate the Zefyr are on the back side of the box. Unfortunately, they are diagramed in light grey, and as modern and techy as it may seem, the grey printing does not show the procedure very well. A little darker, please, for those of us whose eye sight is, well, compromised from years of trying to read undecipherable instructions. 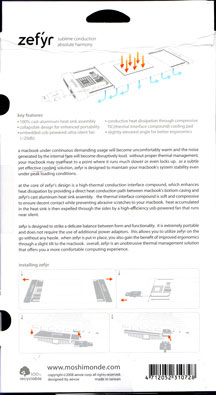 We’ve all had our MacBooks “whir” from time to time as the fan goes into high gear from the great demands we sometimes foist upon the computer. I know when I’ve got Photoshop CS3 going with a few windows open, after a while my MacBook starts sounding like a small vacuum cleaner. The new Zefyr is here to solve those problems of overheating and possible slowdowns, or worse. It is designed to maintain peak efficiency of the MacBook, even under heavy loads. To quote Moshi:

“At the core of Zefyr’s design is a high-thermal conduction interface compound, which enhances heat dissipation by providing a direct heat conduction path between MacBook’s bottom casing and Zefyr’s cast aluminum heat sink assembly.” The thermal interface compound is soft which keeps the MacBook in place and scratch-free, while the USB powered fan runs near silent.

One of the side-line benefits of Zefyr is the angle at which the MacBook is positioned when placed on the unit. The back-end of the computer is raised slightly, about 3/4″ by my trusty Stanley Powerlock. That puts the computer tilted at a very comfortable and ergonomic angle. I’m using it right now, and I like it.

The Zefyr is very portable (expandable and collapsable) and can be packed away almost anywhere to travel with your MacBook. As mentioned before, it is powered by a USB connector, which means you’ll be taking up one of the two USB ports on the machine (MacBook). Suggestion to Moshi: Make the wire with the USB connector another inch or so longer. The shortness of it may cause problems later on, after multiple connect/disconnects, from tugging it, trying to get it to line up easily with the USB port. If you are running other outboard gear powered by USB you may need to get a USB extension to accommodate your gear. But if you’re running that much gear at one time, you probably need the Zefyr. If you’ve ever had your computer lock up because of over-heating you’ll appreciate how simply and efficiently Zefyr does its job, in spite of taking up a USB port.

Case and Point: While on the internet I needed to open Photoshop to find some images. I minimized Comcast and parked it for a while in the Dock. As I was fishing through my photos I found several I needed and opened them. The files were too large so I had to resize them. I also decided to change a few of the images’ attributes by saturating the color a bit, and sharpening a tad before downsizing the photos. By this time the old MacBook was wheezing its way along. The fan kicked in and that was my cue to plug in the Zefyr. I counted the seconds it took to cool things off to the point that the MacBook fan would kick off. PLUG! Wait! About 73 seconds and the MacBook was cool enough for the fan to take a break. THATS how the Zefyr works.

This is a fairly well-thought-out device which would work better and be even more user-friendly with the USB connection lengthened and the instructions a little easier to decipher. It is simple and portable. If you’re using your MacBook to check email and write letters you probably don’t need Zefyr. But if you’re doing photo-manipulation, videos, music recording and production, anything with a major power drain, this devise can conceivably save you time and heartache. And that alone is worth the price of admission.