Newly available from Griffin is their revamped hard case lineup for the iPod nano, ranging in price from $19.99 for the iClear to $29.99 for the all new Elan Form, with the $24.99 Reflect staking out the middle ground.

The iClear is a clear polycarbonate snap together shell with an opening along the bottom for the hold switch, dock connector, and headphone jack as well as on the front for the click wheel. It also has a notch in the corner near the headphone jack that is used to pop it apart with a coin to remove the iPod. The 2 mm thick casing brings the thickness of the nano from 6.5 mm to 10.5 mm, but as thin as the nano is this isn’t a problem. It is quite scuff resistant and protects the iPod very well from accidental (and test) drops.

A snap together polycarbonate shell like the iClear, but with a black rubberized back half and a semi-transparent chromed front half, the Reflect adds an extra touch of style. The rubberized coating makes it easier to grip, and the front coating adds an interesting effect – as the screen lights up it magically appears. Some people may not appreciate the hidden screen effect, however. Like a pair of sunglasses, the chromed front has the effect of lowering the screen brightness somewhat. Both coatings also seem to make the Reflect more resistant to scuffs and scratches than the iClear.

New to the Griffin nano hard case lineup is the Elan Form. Elan Form has a black polycarbonate inner shell covered with a black top-grain leather outer shell. It snaps together and pops apart just like the iClear and Reflect, but has a separate clear polycarbonate panel over the screen. The leather adds an extra 2 mm of thickness and feels good in the hand, in addition to being practically scratch proof. The leather easily makes Elan Form the nicest in the family, with the Reflect and iClear pretty much equal depending on how you feel about the Reflect’s screen hiding effect.

Elan Form is also available for the iPod classic and iPod touch. 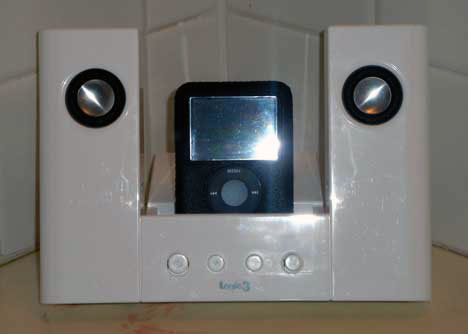 The bottom opening on all 3 hard cases is flush with the bottom of the iPod nano, making them compatible with the majority of dock connector accessories. In addition, as long as you are using a dock insert sized for a 20 GB 4th Generation iPod (or similar size), the iPod nano is dockable in the case. As illustrated in the accompanying photo, however, the pause/play button may be below the top of the dock, making it difficult to press due to the low placement of this nano’s click wheel compared to earlier model nanos.

A feature lacking in all 3 of these similar hard cases is any kind of clip, belt or lanyard, requiring that the iPod be held or carried in a pocket. Griffin states that their research has shown that customers interested in these cases have generally not wanted this feature, but if that’s a drawback for you I have a solution – make your own lanyard.

How you choose to finish it is up to you, but the basic idea is simple – clip the computer end off a spare USB or FireWire Dock Connector cable, loop it back, and connect the ends together. I used two tightly pulled cable ties, but there are other ways to do it. It must have the squeeze latch as shown below and not be Apple’s shorter dock connector design that pulls out easily. Since the nano will be hanging upside down from the dock connector you don’t want it to be able to fall off. 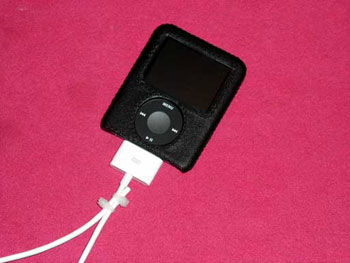 All 3 of these hard cases do a fantastic job of protecting the iPod and make excellent choices for those looking for this type of case. The only feature I would like to see added is a lanyard, which could be done with hardly any bulk added to the case & could be left as optional to the user.

iClear – 4 out of 5
Pros: Tough, clear shell shows off your iPod and provides excellent protection.
Cons: iPod must be held or tucked into a pocket.

Reflect – 4 out of 5
Pros: Rubberized back easier to grip. Interesting hidden screen effect.
Cons: Some may not like screen being dimmed by chromed front coating. iPod must be held or tucked into a pocket.

Elan Form – 4.5 out of 5
Pros: Elegant leather finish and tough inner shell provide excellent protection and nice appearance.
Cons: iPod must be held or tucked into a pocket.