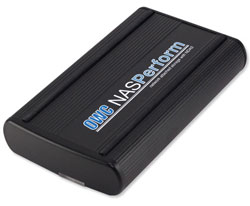 I was very excited to review this product. Iâ€™ve looked at network storage devices from afar, mostly because of price, and almost all of them were Windows based, but really thought they looked very useful. The OWC NASPerform (NP) utilizes NDAS technology allowing it to connect a storage device directly to a network with or without a server. The prices are pretty good at OWC, and our favorite computer platform is fully supported finally, so it was time for this Mac user to jump in. The acronym NDAS stands for Network Direct Attached Storage.

This drive can be used as either a stand-alone external drive, plugged directly into your Mac via USB, or as a network drive, plugged into your network via Ethernet. When using this drive as part of your network, you can connect either wireless, via a wireless router, or directly to a hard-wired Ethernet network. More on that later.

The drive and whatâ€™s in the box:
This drive is black and features a larger than average blue activity light on the bottom of the drive that folds around to the front. It pulsates lightly when the drive is being written to. Inside youâ€™ll find a 7200RPM drive mechanism with a 16MB cache. On the back youâ€™ll find a USB 2/1.1 port and an RJ-45 Ethernet port. Typical OWC/Newertech power supply and plug is included. You also get a full size (36â€) USB 2/1.1 cable, plus an Ethernet cable (36â€). You also get a disk that includes InTech SpeedTools Utility, and Prosoft Engineering Data Backup 3. On the HD itself youâ€™ll find over 1.5GBs of freeware, shareware, and public domain software. A second disk contains the NP network software and documentation.

Setting up the drive
Usually, most of us geeks want to jump right in, by plugging in cables and powering the unit up to get it running as quickly as possible once we rip it out of the box. However, with this drive, that is not advisable.
First, itâ€™s bad for the unit if you plug in Ethernet and USB at the same time. Iâ€™m not sure what will happen to the unit if you do, but I wouldnâ€™t risk $200 by trying it. No, the first thing you need to do is install the NDAS software. Itâ€™s important that each computer that will access the drive installs the same version of the NDAS utility. The disk includes versions of the utility for OS X (10.2, 10.3, 10.4), and Windows.
The first thing I did was print out the quick start guide on the CD. Iâ€™m shocked after reading the system requirements which state â€œMacintosh, (Power PC based) desktop or notebook computer.â€ Intel based Macs not supported? What a disaster. I was hoping to connect this drive up to both my Intel MacBook and my Power PC based G5. I sent an email off to OWC tech support begging them to tell me itâ€™s not true. While awaiting a response, I decide to load the NDAS driver utility onto my G5 and an older iMac. After loading the CD, I notice three folders, Windows, PowerPC AND Intel. A mistake in the documentation? An email from OWC confirms the documentation has been updated to remove the words â€œPowerPC only.â€
Moving beyond this issue, I loaded up the NDAS utility on my G5 and my MacBook.
Meanwhile, I take the NDAS drive down to my basement and hook it into my network via the included Ethernet cable. I plug the unit directly into my Linksys wireless router, plug in the power, and fire the unit up. Note: Before doing any of this, you can, and probably should, plug the drive directly into your main computer via the USB connection, and format the drive based on your use, for Macs, Windows, or a mixed set up. The manual has a section that explains formatting and partitioning if that is the direction youâ€™d like to go.

Using the NASPerform
The NDAS utility window is pretty simple to use. After the first launch youâ€™ll need to enter the unit ID number and key, which is printed on the bottom of the enclosure. Give it a name, and youâ€™re ready to use the drive. This is all done until the â€œGeneralâ€ tab. 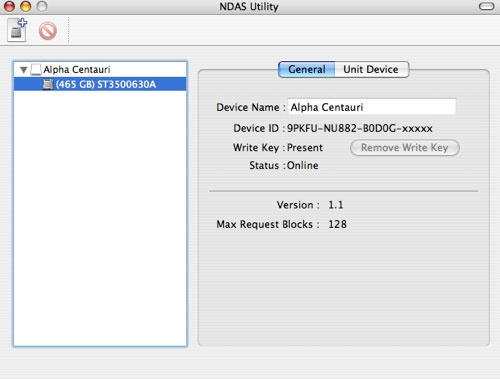 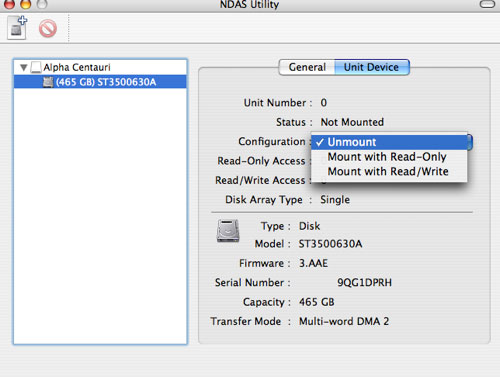 If multiple Macs are connected to the drive at the same time, and those Macs were all reading and writing to the drive simultaneously, data corruption becomes a real possibility. So the NDAS Utility will only allow one computer on your network to read and write. The others will only be allowed to â€œreadâ€ data, not write. For example, as I type this article I am connected to the NP unit as a read/write user with my MacBook. My G5 in the other room is set up as read only. I can mount the drive on both computers, but can only write to the NP with my MacBook. Itâ€™s fairly easy to mount and unmount, or change which computer is allowed to read or write. At first, I thought this would be a pain, but in use, itâ€™s fairly easy to switch to different settings using the NDAS utility. I added the NDAS utility to my dock for quick access. However, I wish I had the choice to decide whether or not I wanted to grant read/write access to multiple computers at the same time. In my small network, the chance that two people would be doing this at the same time would be very slim to none. Of course in a workgroup or a small office setting, this may not be the case and the ability to lock out the other users would be important to maintain data integrity.

How fast is the drive?
Connecting with my G5, which would be a direct Ethernet connection, I was able to copy a 1GB file to the NP in one minute forty-four seconds. Copying the same file, wirelessly, to my MacBook took fifteen minutes, twenty-one seconds. Your speed will vary based on how you are connected and how fast your network is. I also tried unplugging the NP from my wireless router and plugging it into an Ethernet hub. The drive was still accessible and I noted no difference in speed. Finally, I copied a movie clip to the NP and tried to open it up on my Macbook and play it directly from the drive with DVD player. It played flawlessly using the wireless set up. Very cool.

In conclusion
Having a network drive is very useful if you have multiple Macs. Iâ€™ve always had a need to copy files from one Mac to another and the NASPerform makes that task much easier than any other method Iâ€™ve tried. The drive is fast depending on your connection. The NDAS utility is easy to use and setting up the drive is fairly easy, but you really need to read the documentation to get it right. I have marked the drive a bit lower because of the outdated documentation and the inflexibility of the utility regarding multiple Mac access at the same time. This is a solid drive.

One thought on “Other World Computing NASPerform Network Storage – Review”