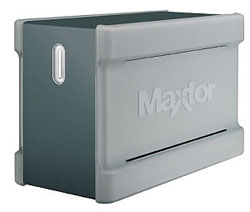 How much storage do you have on your Mac? The demands of photo, video and audio files mean that more and more disk space is a real requirement nowadays, and has really driven down the cost of hard disks.

However, for most of us the Mac is not the most expandable of platforms for disk space. Unless you have a PowerMac or a Mac Pro, internal disks can only be replaced by the use of a specialist Apple engineer. Fortunately, USB and Firewire offers an external storage option, and the availability of external drives has mushroomed.

But that in itself creates a new problem. If you bought an external drive 12 months ago, you can probably buy double the capacity today for the same price (or less!). And if you use a drive to store precious data like photos or downloaded iTunes tracks, then you need a backup, so you’ll probably have to buy another drive and some backup software. Then you have to remember to do the backups, of course…

In my own situation, I have three external drives hanging off my PowerMac G5 – one is a clone of the internal system drive, one holds my video and photo data, and the third is a backup of the data drive. Of course, each drive requires its own data and power connections, and I have to remember to keep the backups up to date, so all in all it is not an ideal solution.

Maxtor offer their massive OneTouch Turbo III drive as an alternative solution. In concept, they aim to address all of the issues I have mentioned – capacity, redundancy and remembering to backup.

The Turbo III is larger than a typical external drive – it around the size of four typical external drives taped together, The reason for this is it in fact contains two 750 Gb drives, and a specialized drive controller. Connectivity is offered in USB 2.0, Firewire 400 and Firewire 800 flavors – and Maxtor includes all of the correct cables in the box, which is a nice touch.

There is an associated software CD included, and this must be run up before the drive can be used. The CD provides a copy of Retrospect Express backup software, a driver for the OneTouch button on the front of the drive, and a configuration utility.

The configuration utility controls the Turbo III’s party piece – RAID configuration. RAID (Redundant Array of Inexpensive Drives) is a technology drawn from the computing server world, and allows disks to be grouped, operating multiple drives as single units. Here, Maxtor offers two configurations – RAID 0, where the disks are joined as a single unit offering 1500 Gb capacity, and RAID 1, where the disks are 750 Gb copies of each other. The idea is that you choose RAID 0 if you want maximum performance, and RAID 1 if you want data security.

Using the OneTouch button, you can have a Retrospect Express backup job fire up with a single button press. It is certainly convenient, but not as flexible as using the multiple backup job scheduling available inside the Retrospect software.

Performance of the drive is fine – data copy jobs ran as fast as the limitations of the data interface I was using allowed. RAID 0 has a theoretical performance advantage, as the data is read from two disks simultaneously, but in the real world this is not noticeable. In RAID 1 mode, the drive appears as a single volume – but any data copied to it is copied to both of the disks.

The limitations on the Turbo III only come to light with a bit of thought. In RAID 0 mode, the disk system is spanned across two disks – if any one of them fails, you will not be able to recover any of the data. The only way to protect against this would be to have another Turbo III backing up the first one! In RAID 1 mode, the data is on both drives – but if one disk were to fail, it is not clear whether the unit would allow access to the other for recovery purposes. You certainly would struggle to crack the unit open to extract the working drive, if you wanted to put it into an external caddy.

Finally, to switch from one RAID configuration to another requires a complete reformat of the drive, which means you would need to have somewhere to store your data while you do the reformat.

The utility Maxtor provides offers drive health checking, and during the course of this review, my original unit reported a disk problem. I was in RAID 0 configuration at the time, but the drive continued to work. However, Maxtor advised me it needed returning to them for repair, and then replaced it. They did not indicate what would happen to my data in these circumstances – but I would assume it would be lost.

There are other products that have a more user friendly and useful approach to managing multiple disks and delivering better data security – though they come at a higher cost. A review of one such system will follow shortly on MyMac.com.

In summary, the Maxtor OneTouch Turbo III is a well-engineered, well supported product, and is a fairly good choice if you need a large capacity external data device. The RAID features, however, suffer from significant practical limitations, and as such don’t really deliver the expected performance or security benefits that the use of RAID might imply. I urge you to bear this in mind if you have this product on your shopping list.