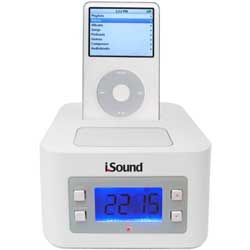 When I travel, I hate using the clock radios in the hotels. You never know if they will go off because youâ€™re never really sure if you programmed the thing correctly. Yeah, you can get a wake up call, but the wake-up â€œshockâ€ you get when the phone rings is enough to give you a heart attack.

Wish you could use your iPod so you can wake up to your own soft music? Well you can with dreamGEARâ€™s Time Travel clock.

The Time Travel is an almost square clock that works with every iPod that has a dock connector.

The Time Travel comes with an AC adapter, but it runs on four AA batteries as well. It also comes with an assortment of iPod adapters that fit into two holes behind the slot where you plug in your iPod so each model fits nice and snug. I tried the adapters with my iPod mini, a Nano and a 30 GB Color model and all fit very well.

The front face features a backlit digital LED clock with snooze function. There are four buttons around the face that you use to set the clock and alarm, and you can use the two buttons on the right to scroll through the playlist you have selected on your iPod. Yes, you donâ€™t have to use the iPodâ€™s scroll wheel (once a playlist has been chosen), you just use the buttons on the front to move to the next song or go backward. Which is very nice. A small LED at the bottom tells you the Time Travel is on. You use the snooze button to turn on the unit, and it also turns on your iPod at the same time. Holding down the snooze bar for two seconds turns both the clock and your iPod off and on.

The back of the unit has an â€œAux Inâ€ jack for use with a shuffle or any other music player. Using this input means you must use that unitâ€™s controls to set sound levels and choose songs. The volume button is also on the back. Which is the one downside to the controls. I wish they had put this button on the front. Finally, the power jack is on the back. When plugged in to an AC outlet, the unit charges your iPod while itâ€™s playing, unless you are viewing video on a video capable iPod. In which case, it just maintains the power level.

So how does the Time Travel sound? When I got the unit I took a good look at it, felt the weight, and concluded that it would sound â€œtinny,â€ and rather lousy. Was I surprised! The unit played very well. Sure, you wonâ€™t get any great bass out of it, and it does sound a little â€œtinnyâ€, but I was impressed with the sound, perhaps because my expectation was so low. Iâ€™m no audiophile, so I brought the unit into the company where I work and asked a couple of other iPod owners what they thought? We plugged in a 30 GB Color IPod and cranked the unit all the way up after tuning to â€œBack in Blackâ€ by AC/DC and we were all surprised that there was little distortion in the sound. Sure, the bass was nothing to write home about, but the sound was more than acceptable. Both people who tried it liked it, and thought it sounded pretty good for an under $40 sound unit. Both also commented that they did not like the volume wheel on the back of the unit, wishing it were on the front.

To sum this up:
Pretty good sound for a small, low priced unit
Accepts all dock mounted iPods and has adapters for all models
Runs on AC or batteries
Backlit digital LED alarm clock with snooze function
Wake up to music alarm feature
Charges iPods when hooked up via AC
Larger than I would like for travel
Volume button on the back is a negative