When America Online (AOL) became a free-subscription service recently, members no longer need to pay for its features, except tech support. Tens of millions of people worldwide continue to use AOL. Among them are clever Macintoshers who join only for an AOL Instant Message (AIM) identity that is compatible with Apple’s excellent iChat, and that provides a second-rate webmail service that is finally straightforward and stable.

You can learn more at AOL’s cluttered home page by clicking on the “Get Free AOL Mail” link near the top. If you can’t locate it, let me know.

Last month a new AOL Radio service was launched for all members, paying or not. Primary URLink is http://radio.aol.com that will redirect you to http://music.aol.com/radioguide/bb with a prominent link to “AOL Radio for Mac Users” (it works differently on Windows).

Clicking on the link instantly downloads an application installer called “AOL_Radio.dmg” that can be double-clicked to install “AOL Radio.app” software to your computer. Why would any sane person want to do such a thing, after all the garbage America Online has dumped into the physical and digital universe during the last dozen years?

By some bizarre twist of events, both AIM and AOL Radio are first-rate. Let’s concentrate on music, not chat. First time you launch AOL Radio, type in your new or existing America Online or AIM identity and password, wait a moment, and observe a new screen that looks like this: 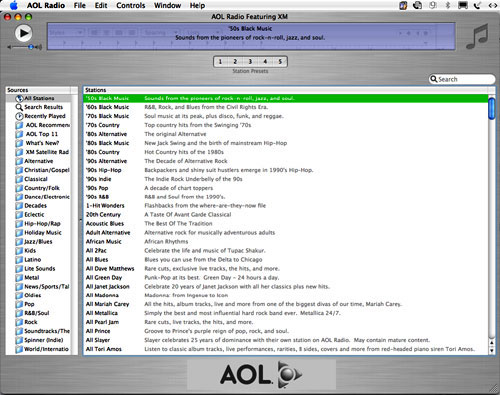 Because you are an intelligent music lover, you’ll quickly make sense of the clear, clean design of AOL Radio’s interface, and you’ll appreciate its diverse selection of over 200 stations, all having very good sound quality. Apple’s free iTunes Radio feature is similar, but inferior. I’ve tried many different Internet radio services, and AOL Radio is the best one, no matter how much you want to hate America Online.

XM Radio is a monthly-fee subscription digital radio service that broadcasts via satellite to homes, cars, and portable players. Here’s a look at the XM home page: 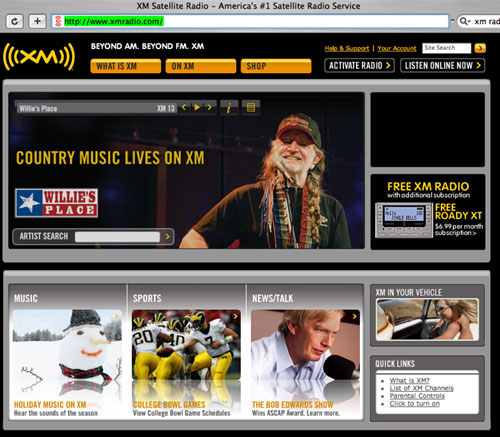 AOL Radio includes 76 of XM’s most popular music stations. Nemo’s favorites include focused programming on early rocknroll hits from the 1950s and 1960s, a couple each for classical and jazz selections, and “The Village,” with American folk music plus a great show hosted by Bob Dylan that plays four times weekly. Twice the quantity of XM stations are AOL’s own programs, of equal quality to XM. Favorites: ’50s Black Music, 20th Century Avant Garde Classical, Acoustic Blues, African Rhythms, Baroque, Bop, Celtic â€” more than I could listen to in a year of 100-hour days with no time for sleep or work. Wowzer!

Whatever your taste is music, weird or conventional, AOL+XM free Internet radio has more than enough variety and quality, without any crashes or bumps in the road, to satisfy. You’ll need a reasonably current Macintosh with a broadband connection. My G5 tower, G4 PowerBook, and G4 iBook all run AOL Radio.app flawlessly.

If you’ve read this far, you are possibly either interested in trying AOL+XM or seething with anger at my nerve suggesting you consider using anything from A-Oh-Hell. In the latter case, remember how bugged you’ve been with Microsoft over the years, yet how you used Internet Explorer with OS 9, and how you rely on Office Mac 2004? I’m not going to cram AOL Radio down your online throat, pal. You don’t have to try it, like it, or acknowledge its existence if you don’t want to. But if you enjoy terrific tunes and trax from old and new wax, Jack, AOL+XM Radio has what the others lack.