We’re going to do a little Q&A for the various writers that saw the keynote. Comments from Nemo, David Weeks, David Every, Roger Born, and Bakari Chavanu 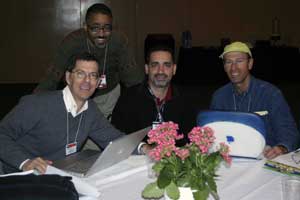 What were your impressions of the Keynote?

Nemo: I’ve been saying that software is going to be the major announcement of the keynote. iLife did get the super-blast upgrade. However, I thought that an Office upgrade would also be announced, with iWork getting a spreadsheet component to displace AppleWorks, once and for all.

DaveE: That’s interesting. I thought there would a spreadsheet update to iWork as well. But, if you noticed, Microsoft announced a 5-year commitment to the Mac. I found that very interesting. While I don’t mean to be a cynic, I immediately pondered their motivation; if there was a cost to Apple. In theory, Microsoft might have done it just to show Mac users their commitment to the platform, as well as increasing sales. But I also wondered if to obtain that commitment Apple had to agree not to release a spreadsheet for the agreement’s duration, or at least until Office is all updated and native.

Weeks: I found the division between hardware and software about what I expected. While I discount rumor sites, when financial and mainstream media mention Intel on Mac, I really pay attention. I was surprised that the iMac was the first computer announced — but once the MacBook Pro was announced, announcing the iMac first made sense as a way to build interest and momentum. However, I’m not sure Apple needs a spreadsheet as much as others think they do. Having Microsoft Office is much more important to the Mac’s credibility in the business world than Apple’s publishing “iNumber”.

Bakari: I was elated. This was my first Macworld keynote, so I was impressed, awed, and still a little star-struck. 5th row back, taking pictures of The Steve. Everything looked great to me; the software — as a creative guy iLife just tickled me. I would use everything in that, including the iWeb and all the integration. I can build simple websites for my clients, at a fraction the cost/time.

Roger: Computers are the 6th invention of man; water, fire, control of steam, wheel, electricity, and computers seem to be the 6th. Computers are a universal do-all tool that can do so much. But it seems that Apple is the company that brings it altogether and makes it so useful to do actual work. I was impressed by Steve and how he gives us apps that focus our talents and abilities.

What about the hardware?

Bakari: I’m not really a hardware guy, and I don’t keep up. Everything sounded good. I care about performance — but I’m not a nitpicker on how they do it.

Nemo: I thought it was great. I didn’t expect to see the iMac updated so quickly. I was expecting the MacBook and the Mini.

DaveE: I really need to look into the hardware and technology they are using more, but they seem to have some interesting improvements and tradeoffs. You lose FireWire 800, but gain everywhere else: newest standards for BlueTooth and ExpressCard, built in camera, remote, much better power connector — and more speed. I’m curious about battery life, whether it runs as hot (physically), and so on.

Roger: I’m trying to think how I can pay for a new MacBook Pro.

Weeks: When Jobs was running the demos in the presentation, I kept thinking it was running pretty darn fast. I kept thinking he was running it on Quad-G5. But when I found out that he was running it on a production iMac CoreDuo, I was duly impressed. Typical Apple price points; same prices as before, but a lot more bang for the buck. I think the little iPod FM Tuner if going to be a great little accessory; I listen to my iPod, but hate to switch to radio for my 4:00pm NPR (All Things Considered) fix. The iPod FM tuner will fix this.

What did you think of the names?

Weeks: I hate the name of the MacBook Pro — but love the hardware. While its’ demise was not unexpected, I did shed a tear for FireWire 800.

DaveE; it just rolls of the tongue like Krazy-glue. I was wondering if they could get another marketing term in there too — like the UberMacBook Lite Professional. And can’t wait for the ultimate iMacBook amateur. Not to mention we aren’t going to use PowerMacs.

Nemo: No comment, because the comments I have wouldn’t be good.

Bakari: What was the name of that iMac CoreDuo? Not impressed.

Michael Singer with Jupiter Media upon overhearing our conversations suggested: How about calling it the iMac Quid-Pro-Quo-Duo.

RogerB: what I’m looking for is a sub-notebook that would be the ultimate writers device.

What did you think of the ads?

Bakari: I loved the ads. This reminded me of back to 1984. Much better than Eminem.

Weeks: 1984? I didn’t see that at all. I loved the Wynton Marsalis ad, though it was a little conventional.

Singer: Think of what that means, they’re targeting a new demographic. Baby-boomers, and not just teenagers.

DaveE: Totally agreed. I really enjoyed the subtle humor and barbs of the Intel ad — but it had a great feel/tone.

Weeks: The Intel ad was funny because it brought back bunny suit references, yet it showed that they were demonstrating they are using the most recognizable PC chip — but they are co-opting it into making it part of the Macintosh Experience™.

Weeks: when I see Jobs plot those sales numbers showing near-geometric growth curve, I can’t help but think, “How long can they keep those trends going?” I think Apple’s only real iPod competitor is Apple.

DaveE: Apple is only tickling their potential. Yes, they’ve grown well in the U.S., but they’re really just getting started worldwide. Also with devices as cheap as they are, and prices coming down, they’ll resell (refresh) to the same people, as well as continue to break into new markets.

Weeks: The issue with going worldwide on iPods isn’t just shipping the boxes, but getting the iTMS and the licensing of music and all the other stuff, in place.

Bakari: I really liked that they were showing that the April 1, 1976 was Apple’s founding date, and its 30th anniversary is coming real soon now.

Chuck Oberleitner of OBE-MediaOne: Did you notice this was one of the most guest -free Keynotes, ever?

Nemo: Steve didn’t appear to be feeling that great today (physically). I’ve experienced many keynotes, while he was exceptional for a normal CEO the RDF (Reality Distortion Field) wasn’t quite as strong as in the past. But the substance of the presentation was dead on.

Chuck: It is cold and flu season.

Roger: I think the whole keynote was sort of anticipated. So in some ways, because of the leaks and speculation, it just didn’t have quite the punch of some of the other ones. But the most significant thing he said is that he’s going to replace the ENTIRE product line this year.

That concludes our little round table session (actually done in the Press Room immediately after the keynote, hence the helpful hecklers and passers by).