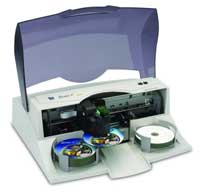 Primera Technology continues to update its impressive Bravo disc publishing hardware. Mymac.com reviewed the original Bravo almost a year ago, and found it to be a competent unit in spite of a few annoying software flaws.

Time marches on, and computer hardware gets cheaper and faster. Primera now markets the Bravo II, which can duplicate DVD’s with the same ease as the original Bravo duplicated CD’s. The Bravo II incorporates the popular Pioneer DVD-RW-107D mechanism, which can burn DVD±R/RW’s at up to 8x, and CD-R’s 24x. To get the maximum 8x DVD burn speed, you’ll need to pop for pricey 8x media. If you’re going to be duplicating lots of DVD’s, the time savings will be worth it.

The Bravo form factor is unchanged from its previous incarnation, with the Improvements coming in the software and internal hardware.

The Bravo II now uses USB II, so data transfer from the Mac to the unit is substantially faster than with the Bravo I. If you don’t have a USB II connection, you can plod along with slow USB I transfer rates

The inkjet printing has been improved, with maximum resolution now up to 4800 DPI. Weeks and Nemo used the included Discus software and Photoshop Elements to design a custom label for an audio CD. We printed sample CD’s at varying resolutions up to the max 4800 DPI. Our label was not particularly intricate, and we felt that the additional ink used for 4800 was not worth the extra time and ink compared to 2400 DPI on our design. A more detailed label would benefit from the high resolution, if you want to use the extra ink.

High-resolution printing requires accurate hardware alignment. Primera’s setup is exactly like the alignment process used by most inkjet printers. We found the new setup procedure painless, although you end with sacrificing two discs to the alignment test. No data is burned to the disc during printer alignment, so feel free to reuse them, if you have a job where you won’t mind the alignment pattern.

New to the Bravo II is “streaming.” Streaming uses multiple master discs in a single duplicating run. You can load 50 discs, and have 25 duped from one master, and 25 duped from the second.

I continue to love the Bravo hardware, but the software continues to hold the hardware back from its full potential. Our earlier review criticized the Bravo for odd software glitches. Most have been resolved with Discus 5.2, the bundled CD DVD/CD burning software Primera uses to control the hardware. Earlier issues with random inability to eject CD’s have been fixed. However, Weeks and Nemo still found it awkward to set up audio CD’s. Discus wants AIFF format audio tracks when creating audio CD’s, yet it insisted that numerous audio tracks already in the proper AIFF format were not AIFF’s. We were forced to have Discus convert the files. Conversion went well, but the step was quite unneeded in the first place. Ironically, The disc with the audio tracks was one created with Discus during the Earlier Bravo I review.

The workflow to create a duplication run with label printing remains somewhat complex. I took plenty of time to re-familiarize myself with the process. While not complex, you must do all the steps in sequence, or run the risk of misprinting the labels on the entire run, or possibly mis-burning all the disks. If you’re doing a run with two different master discs (see above) you better make sure you get it right! Infrequent Bravo users would do well to make up a short checklist to make sure they’ve set up the run correctly.

Once you’ve check and double-checked the run, the Bravo is a wonder to watch. I used Discus 5.2 to duplicate and burn 4 copies of a video DVD I made with iMovie. Discus handled the setup with aplomb, and the hardware burned all 4 DVD blanks with nary a hitch. My patience was tested, as I used 1x DVD media for this first test run. The original DVD was almost full, so it took almost one hour for the Bravo to burn each blank.

Redoing the run with 4x DVD blanks cut the burn time to just over 15 minutes per blank, so including the overhead for shuffling disks in and out of the burner, the entire duplicating run for four discs took about 1:10.

I tested each fresh new DVD, and each played perfectly, both in my Power Mac dual 1.42, and my regular DVD player.

I did not test 8x burning.

For those who need to duplicate DVD’s, the Bravo II is a great piece of hardware. You have to get used to the software, and learn to work around some idiosyncrasies. If you don’t use it frequently, make yourself a checklist, and you’ll save yourself from making some coasters. Remember, 8x DVD blanks aren’t cheap!

But once you’ve got the hang of it, the Primera Bravo II is fine tool.