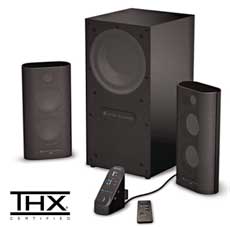 As the resident speaker reviewer here at MyMac.com, I have the opportunity to listen to a bevy of different speakers, but that has far from made me a jaded reviewer. In fact, I absolutely love opening the box FedEx or UPS drops off to find a new pair of speakers ready to be tested.

This time around, it is the MX5021 speaker system from Altec Lansing. This is the third pair of Altec Lansing speakers I have reviewed, the first being the 2100 series back in February 2003, and the other the VS4121 from October of last year. In a direct comparison of all three, for total sound quality, I would have to rate the MX5021 the best sounding.

The subwoofer is large, but not overly so. The satellite speakers, however, are larger than most desktop speakers, and I found that they simply took up too much space on the desktop. To alleviate the size, they ship with wall-hanging brackets, which I used to mount the speakers on the wall on either side of my monitor.

Sound quality varies. At times, I really liked the sound, and thought them rich and expansive. Then, on my next listening, the sound quality was a little muddy in the mid-tones. What’s going on? Turns out, the sound quality actually changes according to the music I am listening to. Harder, base heavy rock such as the tune “Jackson, Mississippi” from Kid Rock sounded muddy in the base, and a wee bit shrilly in the highs. The song, encoded at 256 kbps MP3, sounds much better on the Altec Lansing VS4121s. On the other hand, Silence (The Michael Woods Remix) by Delerium Featuring Sarah McLachlan sounded much better. In fact, that song sounded better on the MX5021’s than on any other computer speaker system I have.

The only conclusion I can realistically draw is that these speakers seem to have either a split personality, or they simply don’t like some songs at all.

Sound quality was also greatly affected by speaker placement. Sound imaging (Where the music sounds like it is coming from, rather than where the speakers actually are) was greater the further apart I hung the speakers. Imaging was great overall, as the MX5021’s sound much more like a large speaker, and less like a simple satellite. From two rooms away, one would never guess the size of these speakers, assuming that the sound would be coming from a good home audio speaker system costing three times as much.

One drawback for some would be that these speakers are not USB, but plug in with a mini-jack audio plug. I personally do not like the USB speakers, and much prefer the mini-jack option instead.

The MX5021’s ship with the above listed three speakers, as well as all the cables you will need. Also included are the satellite wall brackets, an infrared remote control (Volume control, base and treble control, and on/off switch), and a desktop control pad that has a nice turning knob, and has all the functions of the remote. (It is also the infrared remote control pick-up.)

The MX5021 speaker system is marketed at the serious audiophile.

There is more to testing a speaker system than listening to music, such as playing a DVD and listening to how well the speakers perform under both quite and loud moments during a movie. In this regard, the MX5021 sounded and performed superbly. Much better, in fact, than any other speaker system I have tested over the past three years.

The one draw back I have found (other than the not liking some songs thing) is that the power output is not quite up to par. They simply do not have enough power to suit my every desire. Or, more simply, they don’t go loud enough before distortion kicks in. When the wife and kids are away, I like to kick up the volume and jam! These speakers, while very fine in most situations, simply put, do not rock loud enough.

My overall impression, however, is that the MX5021 are a very nice speaker system. The shortcomings I mention above probably won’t be an issue with ninety-five percent of you, but my ear and experience with speaker systems are very trained at this point.

I very much enjoyed my time with the MX5021 speakers, and would highly recommend to anyone wanting to move away from simple computer speakers and move up to a more professional audiophile sound.