Gamers who can’t get enough card games, inventive simulations, and monkeys (Yes, I said monkeys), should take a three hour tour over to Freeverse Software and check out the news section for information on the game that will take the Mac gaming community by storm (or at least a brief period of precipitation)! After a wait of a few years, Freeverse Software is coming out with the sequel to its popular game “Wingnuts”. It’s called (in a fit of originality), “Wingnuts 2”.

For those of you who have never played the original, its concept is very similar to the 80s vintage arcade game “Time Pilot”. This top scroller starts you off on an aircraft carrier and you’re soon doing battle with hordes of other planes and ground based units in league with Baron von Schtopwatch. The nasty Baron has lots of tricks up his sleeve, including cannons, dirigibles, floating air bombs, and vintage fixed wing planes. If you manage to beat his nefarious minions, he sends his big bad boss plane (of course he does) to try and finish the job. Once you finish off the Boss Plane, it’s back to the carrier for some R and R. This doesn’t last long, and soon it’s back up in the air to fight the next wave.

Each wave gets progressively harder, with the Baron using more up-to-date planes and additional ground and ship based squadrons whose goal in life is to kill you. What fun! While zooming around trying to avoid destruction, you can pick up your fellow pilots, more fuel, shields, missiles, and better weapons. Points are scored off combination kills, people saved, fuel left, and other factors. While it’s nice to build up to a high score, the real challenge is how many waves you can get through before your last plane is destroyed. Yes, it’s one of those sometimes infuriating “Never really ends” types of games. All to the tune of what starts off very catchy and soon turns annoying (you can turn it off if you wish) soundtrack. The Baron himself taunts you along the way and you get encouragement from the obligatory uniformed girl (I assume she’s waiting for you back on the ship) on your side. There are different difficulty levels from reasonably easy to AHHHHH! MAKE IT STOP! 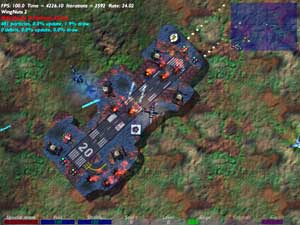 The best part of this game is how easy it is to figure out how to play. No mouse required, no obscure keyboard commands to get a better weapon or to try and jump or squat. Its mindless entertainment at it’s finest. Most top scrollers force you to move along a limited path with waves of bad guys coming out of nowhere until you get to a certain point where you fight a boss. In Wingnuts, you have a radar screen that shows you the location of everything you need to fight. Good thing too, because you have a limited amount of fuel to finish the level. When you get below a certain point, the good guys send along a plane that you can dock with to refuel. You move in 360 degrees anywhere you want to go within the game screen.

From what I’ve been able to gather, Wingnuts 2 is going to follow in the same vein with some additional tricks added (besides keeping yourself alive, you must also defend your carrier) to make it harder. 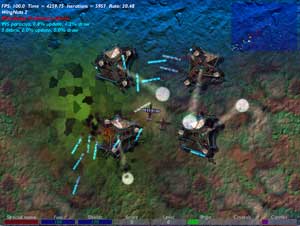 Freeverse has many other games to choose from and they’re all well done. Card games like Hearts or Spades, or strategy games like Wingnuts. You can download limited versions of almost all their games in a “try before you buy” mode. Companies like this and Ambrosia http://www.ambrosiasw.com/news/ should be commended for their faith in the Mac community and the shareware games (Most of which are NOT available for Windows. Ha HA! IN YOUR FACE!) they produce. If you’re looking for some inexpensive irrelevant fun, try Wingnuts, and keep an eye out for Wingnuts 2. And keep an eye out for the monkeys.