The NEMO MEMO
“Napster’s Afterlife, or how “The English Patient” led me to “Hedwig and the Angry Inch”

Does anybody remember Napster? Once the brightest star in the Internet music freeloader’s sky, Napster.com’s home page now promises:

Join the largest, most diverse online community of music lovers in history by downloading and installing Napster. It’s fun, simple, free, and available for Windows and the Mac.

Update
Napster is working hard to restore file sharing as soon as possible. At the same time, we’re finalizing our new service and look forward to sharing it with you. Thanks for your support, and keep checking this space for updates.

Napster was amazing, and it really worked. Somebody, someplace had the songs you wanted to hear, and you could download them without cost or much hassle.

I tried it out, looking for music from my long lost past: Vanilla Fudge, Steeleye Span, Pointer Sisters, Chubby Checker, Barrett Strong, Thelonious Monk, and a few more. The songs I chose were either ones I already had on LP or tape, or ones I longed to hear after 30 years but wouldn’t listen to much from now on.

In other words, I was no commercial threat to musicians, publishers, recording companies, or anybody else. I was having a little fun, period.

I followed the tribulations and trials of Napster in the New York Times, which provides Monday-Friday home delivery subscriptions for students and educators (hint hint) for a mere $2.00 per week. As Napster faded, the coverage became more intense, then fizzled out.

Barbara, my semi-musical wife, heard the soundtrack from the film “The English Patient” in a friend’s car. (You can listen to samples by doing a search for the album title at CDNOW.) I had been disappointed with this music, because the audio soundscapes in the film are spectacular, but are not included on the CD.

Barbara borrowed the soundtrack tape. Its emotional Gabriel Yared score gradually worked its magic on me. Not yet ready to purchase an expensive CD, I spent an entire Sunday morning downloading many individual tracks from Napster. It was a mere day or two before the file sharing service was completely shut down.

Using a Radio Shack #274-883 audio adapter plugged into my iMac’s audio out jack (the headset holes also would have worked), I made a tape from the downloaded MP3s for Barbara and me. HINT: turn off the hourly chimes in your Date & Time control panel.

If you want a detailed explanation of the setup for taping directly from your Macintosh, let me know and I’ll elaborate.

We spent hours and hours listening to that bootleg tape, and we took it to California on our summer vacation. The music was almost CD quality, but not quite, and a couple of important tracks were missing, never to be seen again on Napster.

Not wanting to hear inferior music or get caught by anti-Napster enforcers, I purchased “The English Patient” CD at Borders Books and Music in the Stonestown Mall in San Francisco. This CD is a great movie soundtrack containing lush orchestrations, gorgeous classical piano solos, amazing singing, and a few geezer-pop surprises. I can hear Barbara playing it now in the living room, while she is doing her afternoon stretching exercises.

We watch a lot of movies, in spurts, mostly as home videos, but with occasional visits to the cinema. The two most remarkable performances I have seen in recent films are by Eamonn Owens in the disturbing picture “The Butcher Boy” and by Emily Watson in the more upsetting movie “Breaking the Waves.”

Nemo’s best picture awards from the past five years go to the aforementioned “The English Patient,” and to a current release, “Hedwig and the Angry Inch,” which happens to have an extraordinary web site utilizing Flash animation (with an HTML alternative). 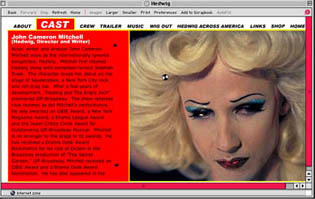 “Hedwig” is a serious, explicit, not-for-tender-audiences, brilliant cutting edge rock musical, social commentary, and coming-of-sexual-age story. No words exist to describe it, but a few reviewers attempted to do so, which can be read by doing a search at Rotten Tomatoes. I thank Sheba, my daughter, for insisting we see “Hedwig,” because without her urging we might have skipped it during its brief visit to Tucson. She tells Nemo Memo readers:

GO SEE HEDWIG! It is a truly great movie, the music, the costumes, the story, the animation, and especially the acting, are all amazing. I can’t recommend it highly enough. That about says it all!

My buddy Kurt told me about LimeWire, a java-based freeware application for file sharing. I downloaded and installed it, and soon I was searching successfully for the 14 tracks on the “Hedwig” soundtrack. Way to go!! (As of today, LimeWire v1.7 is the most current, and new versions are appearing fairly frequently. I had limited luck with Aimster.com’s search client software, but I’ll try Aimster again as it matures.) 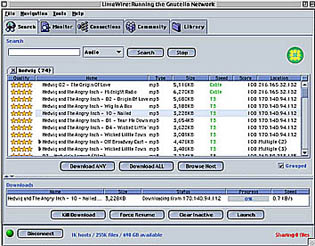 If I find I’m listening to “Hedwig” music over and over I’ll purchase the CD (so should you, friends), but for now I’m content to evaluate the songs. I’m treating downloaded music as “shareware,” meaning it works on my computer but the content providers deserves payment for all their talent and hard work.

I welcome your comments on movies, music, file sharing, and whatever else interests you. Thanks for reading the Nemo Memo, and keep in touch.