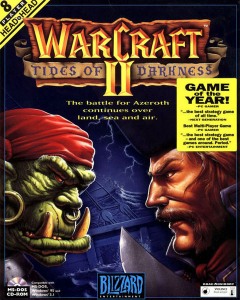 I knew the Orcs were close at hand. It had been a while since their last attack on my city, when they managed to kill three of my workers, and two of my archers before I swarmed over them with my soldiers. I had rebuilt my army back up, and my town was getting larger, but I knew it was only a matter of time now. Time until I would hear one of my workers cry out, “We are under attack!”

And come they did. The Orcs landed a transport ship on my Northern shore, unloaded six warriors, and started attacking one of my farms. I knew I would destroy this band of ravagers, but it was a lost cause. The Orcs had a better fleet of ships than I did. They had already destroyed three of my naval vessels, and I only had three left. One I sent after the transport they used to land their warriors on my shore. My battleship would chase it off, but three Orc ships would get the jump on my one lone battleship. There was no way I could bring up another battleship to help. Nowhere to run. My fleet was down to two battleships and three oil haulers. The only good news: I killed all the attacking Orcs before they destroyed that farm, and lost none of my warriors in the process. Yes, the Orcs would come, but they would not find my ground forces or my city unprepared.

Perhaps I was a bit hasty in my defeatist attitude. I just assumed that they had a fleet large enough to control the sea. But, as my gold and lumber went up, I was able to build more ships. No one attacked me, save an Orc warship that I destroyed fairly quickly. So now I’m back up to a fleet of seven warships. Three transports. And a ground army ready to invade. Perhaps now is the time to attack the Orc city?

This is the premise behind Blizzard’s latest Macintosh game, Warcraft II. Game play is VERY easy, and the fun never stops. Unlike some games in which you must learn twenty different keys to control game play, all you need in Warcraft II is a mouse. You simply click on one of your men, and tell him what to do. Say you click on a peon. That one worker is now in a blue square. He will answer “Yes, M’Lord” or “What is it?” in a half wit tone. (He is a peon, after all!). You then select the action you want him to do, and he does it. Point to the mining/lumber button, select where you want the peon to go, and off he goes. A warrior is equally simple to use. Drag a huge square over, say, five warriors, click the attack button, then click the advancing Orcs, and watch them move off to smite your enemies. They will even answer you in a hearty “At once, sire!”.

Very cool. Very easy to use. Very addictive! This game is neat! You can save your games, and pick up where you left off later. Game play is a little long, but that is the whole point. You will not beat this game overnight. Nor will you outgrow it soon, as you can either play as Humans or Orcs. (When you select some of the Orcs, they reply in a guttural tone “Who you want me kill?”)

One of the best features of Warcraft II (and the first Warcraft) is the ability to play the game over a network or modem. I tested the modem play against Mike Gault, both running a 28.8 Global Village Modem, and found the game speed excellent. No drop in performance at all. You may, if you only have a 14.4 modem, experience a markedly slower game play.

Setting up either a modem or network game is child’s play. Nothing could be more simple. In fact, connecting to the Internet via MacTCP is much harder than starting a modem Warcraft II game! Fast, painless, and you are playing right away. Hey, we are Mac users after all, things are supposed to be easy for us! And Blizzard should be commended for this. You can also play Warcraft II via a network or modem against an opponent on a Windows machine. Hey, cross platform gaming at its finest! (Although I think DOS users HAVE to be the Orcs, but I’m not sure…)

Is Warcraft right for you? First, I am not that much of a “Dungeons and Dragons” type of fantasy fan. But Warcraft is so neat, fun, and easy to play, it made me want to reread J.R.R. Tolkien’s “Lord Of The Rings” again! (Well, perhaps after I finish the new Tom Clancy book, Executive Orders!)

I tested the three level demo game of Warcraft, as the full version is not yet available as of this writing. (Due out by the time you read this). You can download this free demo from http://www.blizzard.com, as well as a demo of the first Warcraft. I plan to buy this game the day it comes out, as I am sure many of you will after playing the Demo.

One thought on “Warcraft II for Macintosh
Review”