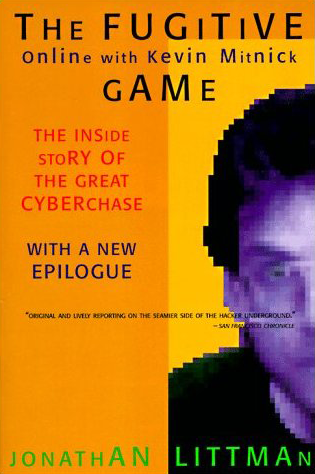 There is something about Hackers that makes me stand up and take notice when there is a news report of one either on TV or in the newspaper. For me, Hackers seem to be a harmless bunch of people with way too much time on their hands, with nothing better to do then try and break into other computer systems just to say “I did it”. This, of course, is not always the case, as some Hackers either steal information from that computer, or damage the contents therein. And the most famous (infamous?) of them all is Kevin Mitnick.

Kevin Mitnick had been rumored to be the ultimate threat to the Internet just a few years ago, and was a wanted fugitive on the run. While Mitnick may have been a real danger with his knowledge of computers and cellular phone systems, was it really fair to paint him as one of America’s most dangerous criminals? Jonathan Littman’s book, “The Fugitive Game” explores just that, while also delving into the world of hackers and who/what they are.

Mr. Littman introduces the reader the life of Hackers unlike any book released thus far. While he does not go into much technical information, he does provide enough to keep most readers happy, and able to follow what is going on. Too many authors tend to either write down to the reader by explaining every technical term in great detail, or using terms most people would not understand without offering any definition. Mr. Littman explains just enough, neither too much or too little. Other writers should take note of his style.

Jonathan Littman’s story is not only about Kevin Mitnick and the 1994 Christmas break in of Tsutomu Shimomura computer system , but about Hackers in general, and how he came to be in contact with Kevin Mitnick during his time on the run. Littman’s phone conversions with Mitnick make for some good reading, and gives an in depth look at what Mitnick was doing/thinking during this time. Reader cannot help but feel that you become part of the story yourself after reading this book. You almost feel that you not only know Kevin Mitnick, but that you feel and think the same thoughts as Littman did. This is the mark of a good writer, and a excellent book.

The real story about Kevin Mitnick, and how he came to be in the public spotlight, started when a then unknown computer security expert by the name of Tsutomu Shimomura had his computer system hacked on Christmas day, 1994. From there, with the help of New York Times reporter John Markoff, the story became front page news. And it is the involvement of Times reported John Markoff, who not only reported the story, but became involved in it himself, that raises many questions. I had the opportunity to ask “The Fugitive Game” author Jonathan Littman a few questions, and here is what he had to say about John Markoff:

My Mac: You all but accuse Markoff of stepping over the line as a journalist and becoming part of the story himself. (Which, with 20/20 hindsight and after reading his own book, he did). Do you think you yourself may have done the same in this case?

Jonathan Littman: Markoff misrepresented himself to the FBI as a member of Shimomura’s team (though in a sense he was telling the truth), and misled Times
readers by not telling them he had a million dollar interest in hyping Shimomura and painting Mitnick as a villain. My challenge was to neither help the FBI or Mitnick, to try to be neutral and objective. I did my best to approach the story as journalist.

After reading “The Fugitive Game” and John Markoff’s book, it does become apparent that Littman indeed acted as most reporters would, while Markoff did not. And if Kevin Mitnick was once considered Americas most wanted hacker, who was it that gave him that title? The FBI? Secret Service? I asked Jonathan Littman that question:

My Mac: Markoff, it would seem, became obsessed with Kevin Mitnick to the point of single handily making Mitnick out to be the epitome of â€œDark-sideâ€ hacking. Do you think Mitnick was as â€œBadâ€ as Markoff portrayed him to be in his New York Times articles?

Jonathan Littman: John Markoff, more than Shimomura, is responsible for convicting Mitnick in the public eye. He wrote in the New York Times that Mitnick broke into Shimomura’s computer and left voice mail threats. Now, he says he’s not so
sure Mitnick committed those crimes. Well, it’s a little late.

Indeed. Kevin Mitnick was captured on February 13, 1995 in Raleigh, N.C. and remains in custody to this day. I asked Littman about the recent guilty plea from Mitnick:

My Mac: As is now known, Kevin Mitnick has plead guilty to using stolen cellular telephone numbers to illegally break into computer databases, and violating probation. Was this a plea bargain? And if so, does this not prove your contention that, while not a pillar of society, David Mitnick was not as bad as Markoff tried to make him out to be?

Jonathan Littman: Mitnick has pled to some minor charges, however, the case against him isn’t finished. The government hopes he will plea to the additional alleged crime of copying over 80 million dollars of software while he was a fugitive. I believe the value of the software is grossly exaggerated, and Mitnick had no profit motive. More interesting are indications I am receiving that the government has proof Mitnick was not the protagonist behind either the Shimomura break-ins or the threats. Note a recent New York Times article, not written by John Markoff, which for the first time
uses the word alleged when referring to the attack on Shimomura.

As a reporter himself, Littman’s book reflects this. He not only presents a list of all the facts of the case, but does not draw any conclusions. I asked him this:

My Mac: In your book, you present many facts without drawing any of your own conclusions, but rather letting the reader make up his/her own mind. Was this done intentionally, or is it simply the â€œreporter in youâ€?

Jonathan Littman: I felt lucky to have an inside seat on one of the biggest stories ofÂ the year, the hunt for Cyberspace’s most wanted hacker. As I talked to Mitnick and tried to probe the Government and Shimomura for answers I found some disturbing revelations. Why had Shimomura misled the FBI? Why was his computer unprotected? Why had he written a program that he said could wreak havoc on the Internet? I asked Shimomura these and dozens of other questions and he responded with legal threats. But I didn’t think Shimomura should be allowed to continue his media blackout. In my book, I provided all the evidence I could marshal and tried to ask intelligent questions. This is a mystery story, and ultimately, it’s up to readers to make up their own minds.

Of course, what brought the whole Kevin Mitnick story to light was the break in of Tsutomu Shimomuraâ€™s computer system on Christmas day of 1994. Was Mitnick the Hacker who broke in and stole (copied) his files and email? Was it Mitnick who later called Tsutomu’s voice mail and left taunting messages? Figuring that Jonathan Littman
was still in contact with Kevin Mitnick, I asked him.

My Mac: Does Mitnick still contend he was not responsible for the break-in of Tsutomu Shimomuraâ€™s computer system?

Jonathan Littman: Mitnick continues to write me letters, and claims he did not threaten Shimomura or break into his computer on Christmas day.

For readers thinking of buying this book, I can only say “Do it!” I myself could not put this book down, and found it not only a good read (which is what all books strive to be) but an interesting subject as a computer user myself. Twice that I can remember, author Jonathan Littman refers to his Macintosh in the book, which of course I was grateful to see! Not only is Littman a very good writer, he also has a fantastic computer preference!

“The Fugitive Game” is a great book. I would highly recommend it to any computer user who is even mildly interested in Hackers. In fact, I enjoyed it so much, I asked Littman this:

My Mac: What can readers expect from Jonathan Littman next? Perhaps the delayed book on Kevin Poulsen?

Jonathan Littman: My next hacker book is another famous hacker, Kevin Poulsen.

My Mac: Hey, I will be the first to buy it, if it is even half as good as “The Fugitive Game”!