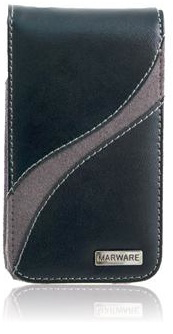 Marware has a recent addition to its well-rounded collection of iPhone cases and accessories: the CEO Flip Vue.

Available for both the original recipe iPhone, as well as the new, extra-crispy iPhone 3G version, the Flip Vue is a stylish leather fold-over slipcase for the iPhone.

The case is made of nice quality black leather on the exterior, and it’s lined with a softer, chamois-like grey leather on the interior. Holes are provided for the camera, headphone jack, speakers, and dock connector. A good quality belt clip attaches to the back of the case.

I used the Flip Vue for a weekend, and found it to be attractive and well-made, but found it somewhat difficult to actually use.

If you use the iPhone while in the case, there is no access to the volume control when the iPhone is inside.

If you’ve plugged in your earbuds with the case closed, you can’t flip the cover open, as the earbud jack prevents the cover from fully opening.

On my evaluation sample, the dock connector opening was a bit too small, making it hard to seat the connector.

Conclusion.
The Marware CEO Flip Vue is an attractive case that does not work well in day to day use.