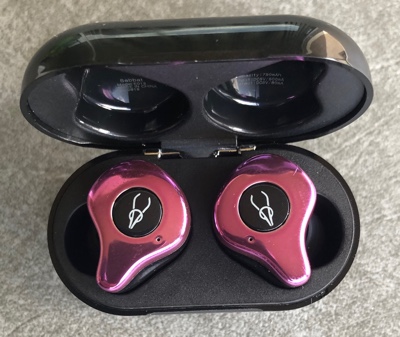 Iâ€™ve always enjoyed listening to music, normally with over-the-ear headphones so as not to bother anyone while Iâ€™m listening. However technology has continued to change and music is now more portable than it ever was before. I had purchased Apple air pods but soon discovered that they just would not stay in place while I was working out or running and at times, sitting and reading. Time for a change to in-ear style headphones.

I researched the ever increasing flood of in-ear products, looking for ear buds that would provide the sound quality that I was looking for yet not break the bank. Ear buds are now available from the mid-teens dollar price range up to almost $300.00. The Sabbat E12 Ultra earbuds, the updated version of the Sabbat E12 earbuds, stood out amongst the top contenders.

When you remove the box out of the sleeve it sits in and you open the box up, the first thing you will encounter is the Users Guide, printed in both English and Chinese. The charging case in sitting in foam, with the two earbuds positioned above the charging case. To the right of those two items are the six additional ear tips that come with the unit. If you pick up the tray that the ear tips are sitting in, below them you will find a box containing a USB-C charging cable and a soft storage bag to carry the charging case and earbuds in.

The charging case itself is a high gloss black finish with a magnetic lid that stays closed and keeps the earbuds in place if you turn the case over while itâ€™s open. On the back of the case is the USB-C charging cable port and on the bottom of the case if a wireless charging symbol which if great if you have a wireless charging device. There are four white indicator lights to show the charge level of the case; easy to see when you will need to recharge the case.

I recommend that when you purchase a pair, read Step 1 in the User instruction guide to easily have the earbuds put into pairing mode. It walks you through pairing the earbuds and then connecting with your Bluetooth device. Quick, easy and painless. Connecting the earbuds with your device is easy to do (look for Sabbat E12 Ultra in your deviceâ€™s Bluetooth section) and once done, subsequent use of the earbuds with that device is fast and easy as they will automatically reconnect to the last device used. You can remove one of the earbuds from the charging case, leaving the second earbud in the case and the one earbud will power on and connect to your device. When you are done utilizing the earbuds and you replace them in the charging case, they will automatically power off. The Sabbat E12 Ultras utilize Bluetooth version 5.0 and audio decoding is done by Qualcomm APTX/AAC/SBC. The manufacturer states that battery life of the earbuds is 6 to 8 hours with a charging time of one hour and a total of thirty hours of use using the case. In my use I have found the earbuds to work for a bit over six and a half hours before needing a recharge, more than sufficient for my needs. The earbuds themselves are of two piece construction and are of a high gloss finish. Yes, you will leave fingerprints on the earbuds, not a big deal.

Using the buttons on the Sabbat E12 Ultras is easy to do. Unlike some other earbuds, the E12 Ultras do not require a hard press, forcing the earbuds further into the ear. A short press on either earbud will begin to play or pause, answer a phone call or hang up. A long press of two seconds powers on, wakes Siri up and a long press of four seconds will power off the earbuds. This can be done from either earbud. If youâ€™re listening to music, no need to work through your device. If you double click on the right earbud, the next song will play while a double click on the left earbud will play the previous song. Three clicks on the right earbud will raise the volume while three clicks on the left will lower the volume. The earbuds themselves are rated at an IPX 5 against water. A light rain or sweat will not cause a problem for the earbuds but they are not rated for submergence in water. I have had no issues at all while using the earbuds while working out or running. In regards as to whether the earbuds will stay in your ears while working out or exercising, the manufacturer has provided six additional ear tips besides the ear tips that already come on the earbuds. Try the other ear tips out if you arenâ€™t happy with the initial fit until you find the right pair. Just remember that larger ear tips may drastically cut down on the outside noise while you are wearing the earbuds so be careful while running outside. Always monitor your surroundings!

Using the Sabbat E12 Ultras as wireless phone earpieces is a pleasure. The sound quality is great, the microphone pickup on the earbuds works great and the only con I found was that some folks thought they were too sensitive to surrounding noise while others found no issues like that at all while on the phone with me utilizing the earbuds. I have spent the past few weeks listening to every different type of music that I could to gauge how the earbuds perform. I will pass on that if you are going to listen to music, adjust the volume at no more than 70 percent until you become used to the earbuds. The volume at the peak is too loud for most people so start off at a comfortable level.

The Sabbat E12 Ultra Earbuds come with a one-year Warranty.

All in all, I give the Sabbat E12 Ultra Earbuds a My Mac rating of 9 out of a possible 10.