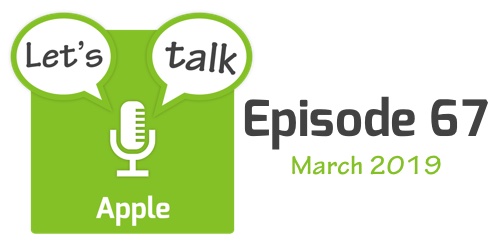 This month Bart is joined by Guy Serle from the My Mac Podcast, and Nick Riley.

The show starts with a few quick followup stories before moving on to look at some notable Apple-related numbers, some Apple-related legal stories, some Apple HR news, and a few Apple Acquisitions that made the news in March. The five main stories are Apple’s Annual Shareholders Meeting, the new legal battle that’s kicked-off between Spotify and Apple, the new hardware Apple unexpectedly announced in the run-up to the March event, the services announced at the March event, and the resurrection of ‘keyboard gate’ as Apple’s 3rd generation butterfly keyboards continue to fail for some users. The show finishes with a quick rundown of some other smaller Apple-related stories that made the news in March.