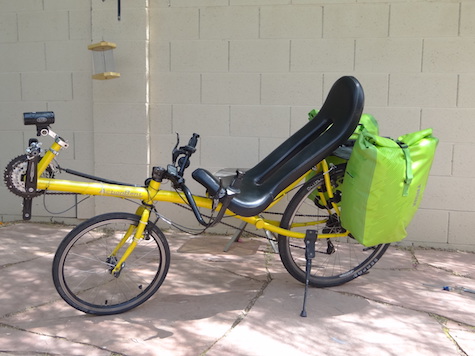 I’ve always been impressed with Thule roof racks and when I received a set of Shield Panniers ($150) and the rear Tour Rack ($100) by Thule I was excited to try them out. I have done cycle touring and know the advantages of a good rack and pannier set.Â The Tour Rack mounting system is quite innovative, as it does not rely on dropouts (the bolt to points on a bike frame) but uses ratcheting straps to mount to the seat stays. This mounting system is very adaptable to various frame designs. Also many bikes are built without dropouts and normally cannot be used for touring or even normal commuting with a small load.

I decided to install the rack on my old EZ Bent recumbent bicycle which I have toured with and use regularly for small shopping runs. I removed my old rack and opened the box to find a lot of unusual hardware and mounting instructions in the universal language of pictograms. The instructions took a little time to figure out, mostly because it was a unique mounting system that uses ratcheting straps to mount to the bike’s seat stays. In 20 minutes the rack was on on the bike and it appeared very secure. It’s rated at 25 pounds, which is OK for light touring and daily commuting but not what a dedicated cross country cycle tourist may need. 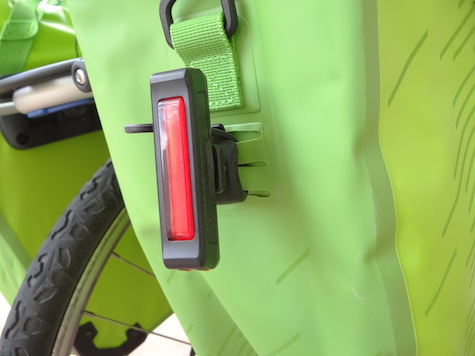 The Shield Panniers are the “large” size (measuring 13X6X17 inches) with a rated volume of 1464 cubic inchesÂ each. They are constructed with very sturdy IP64 material with welded seams, using a â€œdry bagâ€ style closure at the top. I’ve got an inflatable whitewater kayak and the material is quite similar. I think you could drag your bike through a river and your stuff would stay dry. 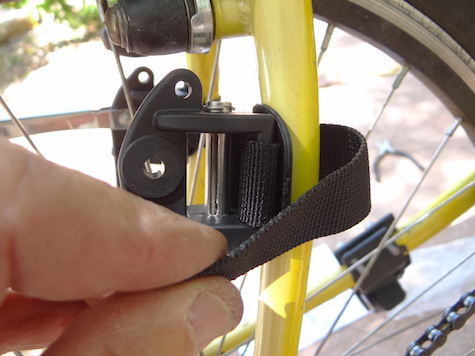 What is best about these panniers is the mounting system. When used with Thule’s Tour Rack the bags are secure and easy to attach and remove. All it takes to attach the panniers is a pull on a padded cable to open the latches at the top of the pannier and place it on the mounting bar and release the cable. There is a Pack and Pedal Magnet ($20) that mounts about halfway down the rack that keeps the pannier from flopping around in the wind. 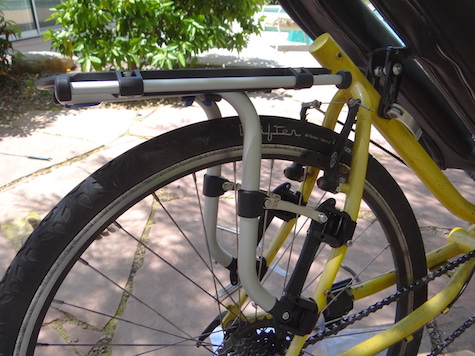 I have yet to tour with these panniers, but riding a few miles to get a few groceries, I found them more than adequate. I was able to put in one pannier a three season sleeping bag, my Midori Solo tent, a camp stove, and had room to spare. Loading the other side with two gallons of water and some towels I took them for a short spin over rough roads and down and up some steep hills. They tracked very well and never felt loose or insecure.

I noticed that there could be a wear point when the magnet meets the pannier. There is some sliding between the two and if I were to go on an extended tour I would put a piece of packing tape on the pannier to stop any rubbing directly on the pannier fabric. I think I will add the tape now and then be able to forget about it until I see it wearing of the tape and replace it.

One last thing about the Tour Rack. I looked at my mountain bike and found that I could not mount the rack on the seat stays because the routing of the shift and brake cables were on the outside (rear) of the seat stays. This prevented the â€œrubberized gripsâ€ from sitting directly on the seat stay. So check out your bike and ask the dealer to help if you are unsure if it would work.

WhenÂ you are looking for a touring rack or a set of panniers and don’t plan on hauling a huge load, the Thule Tour Rack and Shield Panniers are a great combo. They are easy to get on and off, waterproof, with plenty of room and will fit most road, mountain, city, cross, or recumbent bikes.