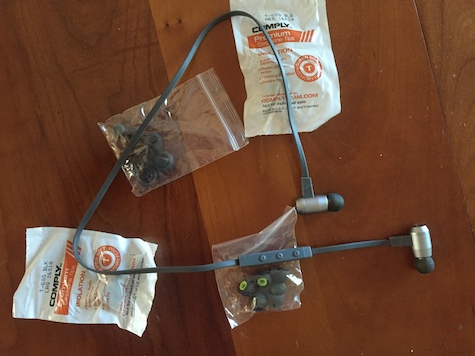 Optima NuForce BE6i arrived with a boat-load of earpieces including two with sound deadening memory foam and two small wings that help hold the earphones in place. As with most in-ear headphones, a key factor in comfort and sound quality is the earpiece fit, and these have seven styles to chose from.

After finding the best fit for my ears I took them for a run, a real test of the usefulness of the BT earphones. Fifty meters into the run I needed to turn around and try something else. The fit, perfect while sitting or walking around, quickly came loose and I needed to shove them back in.

After a little experimentation I found the trick. If I’m planning to do much moving around, I hold the earphones in either hand in front of me, bring the cord under my chin and wrap the cord behind my ear over the top of the ear and then put the earphones in my ears with the cord connection sticking up. There is supplied a small button that will take up the slack on the cable under my chin, and like a hat, can be tightened under the chin.

After refitting the BE6i I then went for my 5K run and never needed to touch the earphones again. The best fit I’ve ever had! They are water resistant too, although that’s not so much needed here in the desert of southern Arizona, but a nice feature. 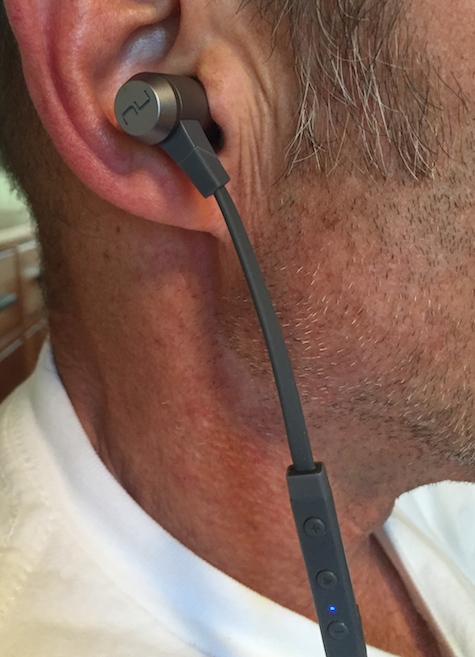 The sound quality is very good, comparable to some of the best wired earphones Iâ€™ve used, and better than any OEM ear buds I’ve tried. I listened to â€œA Short Trip Home,â€ the 1999 work with Edgar Meyer on double bass, Joshua Bell violin, Sam Bush mandolin, and Mike Marshall on guitar. This is a wonderful recording of eclectic music mixing classical, bluegrass, and New Acoustic styles. Recorded very much in the classical vein, with no compression, it still has the presence of a bluegrass band as Bush’s mandolin takes center stage.

The audio experience with Optima NuForce BE6iÂ  earphones was very full and precise, sounding clear and distinct even as the volume became quite quiet.Â  Then, on the loud side, there is Calexico’s â€œCarried to Dust.â€Â  I was able to blast this CD at full volume with no distortion, and the bass never got muddy as the volume increased and the vocals and horns remained clear and crisp. I’ve worn these Bluetooth buds for two hours straight, using the over the ear under the chin mode, with no discomfort.

The battery recharges quickly, and under constant use the charge lasted about the full eight hours they are rated at. The cable is tangle proof and is very sturdy as are the earphones with their aluminum housings.Â  They work well while using ear protection in my woodworking shop. I use earmuffs, covering my entire ear. The charging port is opened easily by sliding your finger on the edge of the port.

On the negative side I found there wereÂ occasional dropouts during my run. I don’t know if this was due to the BE6i or my using a Fitbit Charge2 in USB tracking/mapping mode just overloading my old iPhone 4S.Â  In either case the few dropouts were very brief, a second or two. The small storage case is a way to keep the earphonesÂ  handy and safe. The interface with your phone should be straightforward, but to get some detailed info on various options visit the Optima website.Â

One alert: The speaker driver housing barrels are a bit large for some people’s ears, so always try before you buy or purchase from a dealer you can exchange with if necessary. 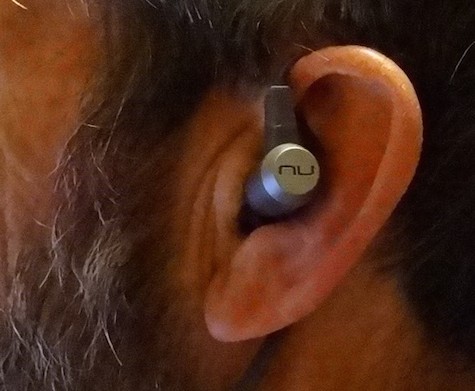 To wrap up, the NuForce BE6i Bluetooth earphones are a great value for sound and the convenience of Bluetooth technology. I’ve seen them priced from $130 to about $100. So what are you waiting for, because you don’t need an iPhone 7 to want a set of these!

MyMac Review Rating is 9 out of 10 for this reviewer.