Trackballs are not just devices for gamers. They can also provide a viable alternative way to control and select for more traditional computer usage. The Kensington Orbit Wireless Mobile Trackball was reviewed in a non-gaming environment to ascertain if it could become part of the arsenal of a first-time adopter. After years of using mice, would the claimed advantages be compelling enough to overcome the natural resistance to change that comes with an old, familiar way of working?

The Kensington Orbit Wireless Mobile Trackball (just Orbit Mobile from now on) resembles an overgrown mouse with the rolling ball where the scroll-wheel would be on a conventional mouse. The Orbit Mobile fits under a hand in a very natural way, with the middle finger rolling the ball to move the screen cursor, thumb and pinkie operating the left and right click buttons, and the second and fourth fingers operating the touch-sensitive pads that control scrolling. If that sounds complicated, be assured that it isnâ€™t: starting to use the Orbit Mobile does not require you to do anything other than place your hand comfortably on top of it with the weight of your hand supported by your palm and your wrist resting on the desktop. 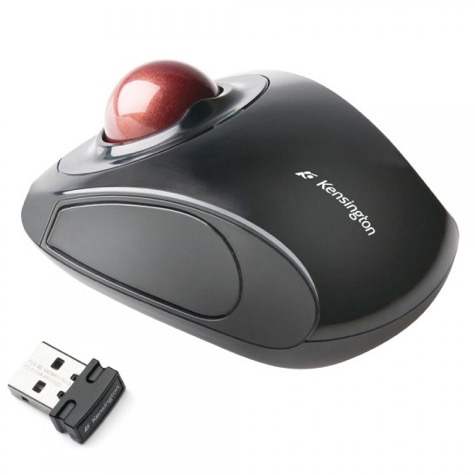 Store the easily-lost wireless receiver inside the battery compartment.

Kensington claims most users become habituated to the new device in about a week. Your reviewer was able to resist the temptation to push the Orbit Mobile across the desktop within a couple of hours! What is required is to spend enough time using the device to acquire sufficient muscle-memory to make operating the controls become second-nature. Most long term mouse-users will probably have forgotten just how awkward and clumsy they were when they first started using a mouse, so allow at least a week.

All the relevant information you need to begin is on the outside of the box. For those who want the comfort of the minutiae of a printed manual there is one included with the first four pages in English, although two of them are health and safety warnings and how to get support.

The device is this simple: install the thoughtfully supplied batteries, plug the nano wireless receiver into a USB port (when not in use, it can be stored in a slot within the same internal compartment as the batteries), flip the switch on the base into the â€˜ONâ€™ position, and start using the Orbit Mobile trackball. The tracking ball itself can be pressed gently out of its mount for cleaning and afterwards pressed back into its mounting just as easily.

The Orbit Mobile worked right out of the box, but it is a good idea to download the TrackballWorks software from trackballworks.com for additional features and configuration. That URL forwards to the Kensington website and you will need to click the link for the Software and Drivers page. You will be tempted to run the Orbit alongside your existing mouse. This does work, albeit perhaps with some interesting quirks depending on your existing setup, especially if your current mouse is also wireless. Your best plan might be to commit to using only the Orbit Mobile until you become proficient. 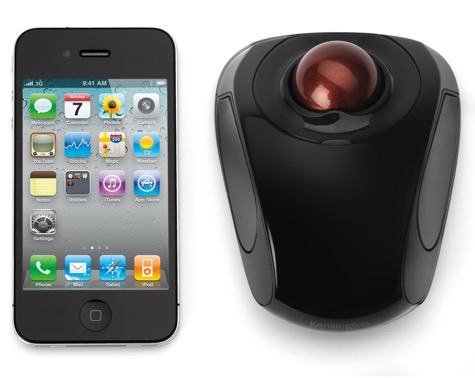 Will it fit your hand? Check out the size against an iPhone.

The Kensington Orbit Wireless Mobile Trackball is a well designed and manufactured product. All the controls work smoothly and precisely. The software works as expected. Left- and right-handedness is accommodated. The weak link in the chain of command is the user. Only time and persistence will give you mastery of the device. Perseverance will bring its own reward. Outcomes tend to be polarized: the majority of users either love or hate trackballs.

On a personal note, your reviewer was formerly a hater. After a couple of weeksâ€”because undoing 25 years of mouse use takes more time than younger, more adaptable people may needâ€”a sufficient level of skill was acquired to make using the Orbit Mobile a pleasure.