The LifeCHARGE iBattery case for iPhone 6 charges your phone and provides you with plenty of extra power for long days, plane trips, or weekends off the grid. An iPhone case is a personal choice since your phone is in your pocket or purse all day, every day. This is particularly true with a battery case as it provides power as well as scratch protection. If the case is wrong in any way, you’re unhappy. 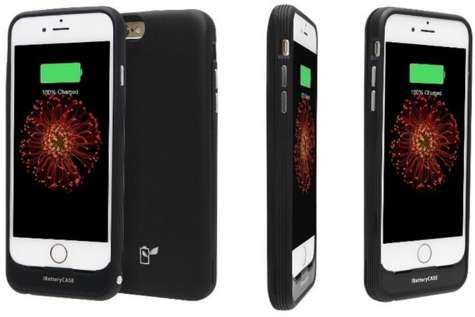 Initially, you won’t be pleased with the extra heft and blockiness. The iBattery case exactly doubles the thickness of the iPhone 6 and adds 3/4 inch (19mm) to its length. In addition it adds 2.75 ounces (78g) to its weight. There is a positive trade-off: with its 3000mAh battery, you’ll have enough power to at least double the iPhone’s use time. LifeCHARGE says that the built-in Lithium-Polymer battery will provide up to 18 hours of talk time, 13 hours of Wi-Fi Internet usage, 50 hours of music listening, or 15 hours of video playback. I am getting roughly similar results, but times vary widely depending on use.

There are two parts to the iBattery Case: the back that contains the battery, and a slim plastic rim that surrounds the phone and keeps it in place. This rim has ten tiny tabs that snap and lock when you press the case together firmly. By itself, this ring seems a bit fragile, but when the phone is securely assembled in the case, it feels firm and tight. It’s a fiddly process to make sure all the tabs have snapped securely. I can’t comment on drop-testing, but I am a little apprehensive about its resistance to accidents. The entire case exterior is a soft-touch plastic that feels comfortable and reassuringly grippy. 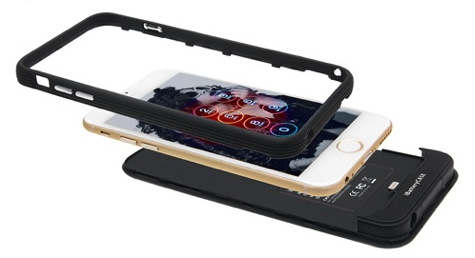 On the lower right side of the case there is a small silvery button. A press lights up five LEDs indicating the reserve power levels. Each LED represents twenty percent of its power so four LEDs indicate eighty percent charge, three equal sixty percent, etc. The same LEDs indicate the charging levels when the case is plugged into any typical 5 Volt charger. When it is connected to a charger, both the iPhone and the iBattery case are being charged.

The 3.5mm audio socket on the bottom of the iPhone 6 is recessed deep in the case because of the thickness of the battery. LifeCHARGE includes a short, easy-to-lose extension cable that will reach through the case so that you can connect your headphones.

There is a built-in Lightning plug inside the case. When the iPhone is installed, an included micro-USB (not Lightning) cable connects to your Mac and also syncs the iPhone. This is convenient because the case is awkward to disassemble frequently in order to remove the phone.

There is a delicate balance here. On the minus side, the iBattery case is bigger and heavier than I’d prefer, but on the plus side, it extends the iPhone 6’s use-time significantly. I find that the iBattery case is too bulky for full-time use. Much of the time, I plan to leave the case on my desk ready and fully charged. When I travel or know that I have a very full day with lots of iPhone use required, I’ll use the case.

MyMac Review rating is 8 out of 10