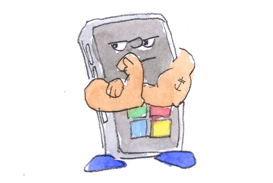 If onlyâ€¦#1. Hereâ€™s a iPhone contradiction. One of the common complaints about the iPhone is that its battery doesnâ€™t allow heavy users to get through a long day without recharging. Yet with each iteration, Apple makes the phone thinner. I think there is room in Appleâ€™s line-up to make, letâ€™s call it, an iPhone XL (Extended Life), or iPhone Pro. It would be a couple of millimeters thicker [gasp!] to accommodate a larger battery. Apple says that the iPhone 6 will yield up to 10 hours of internet use. How about an iPhone 6XL that will yield 16 hours? 20 hours? There are users who would gladly shell out additional cash for this and would not mind compromising a little extra thickness.

If onlyâ€¦#2. An iPad is, primarily, a one-user device. You set it up with your own app choices and preferences. Trying to share it with someone else is frustrating for both parties. Now that Touch ID has been added to the iPad line, hereâ€™s an idea that should be possible to engineer: separate user profiles. Using your fingerprint, you set up the iPad to suit your requirements and liking and, later, your partner can set things up to her tastes by accessing the iPad with her fingerprint. Better yet, your four-year old wants to play games on the iPad. You can set his profile with no internet access, no ability to change settings, and all of his favorite games.