Sweden’s JAYS breaks into new sonic and app territory with t-JAYS Four in-ear headphones and the custom JAYS Curves iOS app for iPhone and iPad. This article may be the first you’re learning about Curves Digital Signal Processing (or DSP), but it won’t be the last time. DSP is here to stay, so brace yourself, audio fanatic.

The t-JAYS Four (abbreviated as tJ4) headphone are almost (or better than) conventional, which is a good thing. Multiple size comfortable tips and a too-small carrying case are provided in the idiosyncratic standard JAYS hard shell product packaging that we have described in prior reviews of JAYS products. 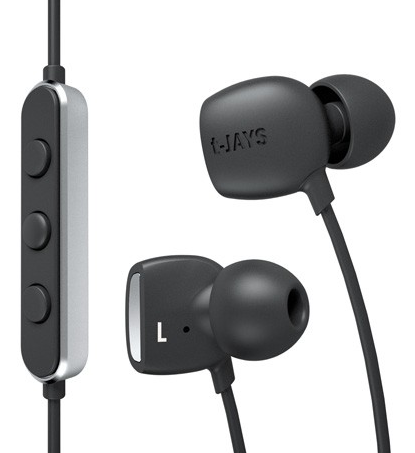 tJ4’s sharp-edged protuberances will take a bit of physical tweaking to achieve comfortable placement in your ears. I prefer the R and L speakers inserted into the corresponding ears, using JAYS’ largest tips, and with the cables looped over my ears from front to rear. Passive ambient sound isolation is good to very good.

Inline iPhone/iTunes controls are located on the R speaker line. Conversations are easy to comprehend using the iPhone microphone. tJ4’s cable is two-stage, which is convenient for near-distance and standard-distance device placement.

Audio response from tJ4 is bright and spacious out of the carton, with equalizer (or EQ) required to tune the company’s soundstage to your preference. Let these and all headphones play at medium volume in 2-to-4 hour increments in your sock drawer for up to two days to break in the speakers.

JAYS licensed a high-end DSP audio enhancer from Dirac in Sweden. The Curves iOS app incorporates the Dirac DSP with a tap on an icon in the lower right corner of the Curves player, which has access to the Music on your iOS equipment. Curves DSP is a one-trick pony that will take a few hours to learn to ride, because its sonic alteration is severely different from anything you have heard previously. There is no EQ available when Curves is invoked.

This Curves DSP is customized for tJ4, but it works with any and all attached headphones and external music players. You can download the JAYS Curves app now or in the future to test drive it with your existing playback apparatus.

Curves eliminates most of the spaciousness of the generic tJ4 performance. The sonic spectrum is crunched together and consolidated into a forceful, frontal presence that includes everything from bottom to midrange to top. It sounds very different. Some of you will love it and some of you will have to live with it for a while before grasping its wonders.

Here are some comments from Peter Cedmer, JAYS product manager for Curves and tJ4. He tells MyMac:

The idea behind t-JAYS Four was to create a pair of earphones balancing more professional IEMs [in-ear monitors] and consumer earbuds. We wanted them to be as small and slim as possible, to fit flat inside our ears. We worked hard on mounting a pair of rather large and powerful speakers inside this small housing (10mm neodymium driven drivers) and optimize the inside space. The angled eartube/housing and the form factor all derive from our idea of use and maximize acoustic performance.Â

It might be a little bit different inserting them the first couple of times but when getting used to them you should be able to experience a really good fit. All ears are different though. If you experience any discomfort from the edges, try wearing them upside down in the opposite ears with cables behind your ears for a better angle and use the cross channel functionality to switch L/R channels under iPhone settings in the JAYS Curves application. The switch starts when you enter the app again.

You start the app, insert the t-JAYS Four and press the D logo down right to start the DSP. Then you should hear a clear improvement in the audio brining much more detail forward. The DSP will improve impulse response and provide a much more detailed sound. If your ears are used to the T4 [conventional] sound signature then you might need to run the DSP on for a few hours/days for the ears to adjust to the new sound signature.

The EQ in the iPhone will not change the sound in the Curves app. An EQ is something totally different than this and we didn’t want to confuse people that we use a standard EQ like our competitors. The mathematics and programming behind this app is totally crazy.Â

My colleague Dale Thorn is the best headphone reviewer on the planet. In addition to his independent review, linked below, he also tells MyMac:

If you want a real shock one way, play the t-JAYS Four and switch the DSP on and off. Then to hear it from the other perspective of what the correction curve is, plug in a full size neutral headphone with the DSP off and play some music, then switch the DSP on. That should be a real shocker.

The Dirac player knows where those [complex musical sounds’] differences are, not by computation, but by the built in program and data that’s specific to a particular headphone, which Dirac puts into the [JAYS] player. All the iPod/iPhone/iPad has to do is correct the incoming signal according to the program-data. But since those corrections are very peculiar and narrow-band (think of a 1000-band equalizer), the iPod/iPhone/iPad has to apply that program-data to the digital music track before it goes to the DAC [digital-analog-converter] and headphone amp.

The older iPod/iPhones (circa three or more years ago) don’t have enough processing power to run that program. The program itself, containing code plus the data that’s specific to the headphone the player is made for, didn’t exist two years ago or one year ago, even though the processing power was available in the newer iPod/iPhone/iPads. That’s because the program is very complex and the job is huge, so they worked all that time getting their programmers to make a version that was compacted and optimized enough to run on iPod/iPhones/iPads.

Now as to evaluating the sound, the best way in my opinion is to make sure you have a proper fit with the earphone, so you’re getting the best bass and treble, etc. (you can verify that by just pressing the earbuds in to see if the bass is too heavy when you push in, or too thin when you let go), then listen to a track you’re quite familiar with that has a full range of frequencies but not large dynamics. The big dynamics can wait until later – you want to hear everything at the same time for this test, the full range of tones. I use Cat Stevens’ Morning Has Broken, but there are any number of songs equally good.

When you’re very familiar with the song long-term and short-term (i.e. listen for a few minutes now), then switch to another headphone plugged into a comparable system (with a standard player, no EQ)Â so you don’t have to disconnect plugs, etc., and hear the difference. The Dirac-corrected item should be obviously smoother, more extended, and have better details without harshness.

Home-based Dirac apps should appear for loudspeakers as well as headphones eventually, with the difficulty being the room has to be corrected with the speakers, where headphones don’t have that problem. For speakers, the blessing is also the curse. But it is coming, and it will revolutionize personal stereo.

There are some caveats, based on larger issues â€” larger in scope in the entertainment gear industry, with multi-channel sound in home theater, etc. Perhaps Dirac is already on top of that â€” don’t know yet. In spite of Dirac themselves making it clear (again and again if you follow them) that EQ is only a small part of the DSP, the DSP they do is far more advanced than EQ.

The prominence of [promoting] a JAYS Curves player could confuse potential urban-music customers and make them shy away from the t-JAYS Four earphone entirely. So what do the rest of us have then? Two distinct worlds of sound are at the touch of a $3 app button, using the same exact gear. Not a bad deal, huh? If we get tired of Beethoven with t-JAYS Four and Dirac, we can just hand the earphone off to some young’un and let them rock out to Snoop Dogg or Notorious B.I.G.

And again, not to complicate things, but where the Apple music players and Android players and most other portable music players have EQ settings so users can tweak the sound more to their taste, the Dirac players have no such choices, primarily because the Dirac processing already sucks up some of the player’s power to do its work, and that doesn’t leave any extra headroom for additional tweaking with EQ curves. There may be other reasons such as ambiguous overlapping bits in the digital processing, but those can get complicated.