Some products are harder than others to review just because of how complex they are, or because of all the different potential uses a particular program might have. Most Adobe products fit into both categories and Premiere Pro from the CS6 collection is no exception.

I know a lot of Mac users donâ€™t like Adobe because of all the friction between them and Apple over the years. Time to let that go. Thereâ€™s a reason why the CS series from Adobe are best sellers in Mac software year after year and it isnâ€™t because of price. Lordy no thatâ€™s certainly not the case. Itâ€™s because Adobeâ€™s products fill a real need and when deadlines are tight, you donâ€™t send a project that uses other than industry standards and Adobeâ€™s CS programs fit those to the tee.

Final Cut Pro with its new interface has caused some professional film editors to consider switching to other editors. Itâ€™s not hard to see why. Final Cut Pro X was such a huge departure from version 7, and it was missing many features considered essential. For most that left either Avid or Adobeâ€™s Premiere Pro.

So where does that leave me? Iâ€™m not a professional editor, but in some ways thatâ€™s better since I wonâ€™t get bogged down by jargon and I donâ€™t have a particular preference with a set workflow. I just want to know how easy it is to take video, import it in, and edit it into something useful. So letâ€™s start there.

Anyone who has used a multi-track video editor before will feel right at home with Premiere Pro. All the familiar elements (no pun intended with Adobeâ€™s Elements programs) are there and well laid out. You can also resize nearly any window or undock it to free float if you choose. Very customizable. 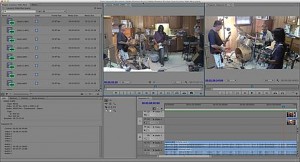 Thereâ€™s the bin for storing source files of various types. This same window houses all the different effects you can use in your projects. You can even resize the icons in your project bin as more material is added with a slider on the bottom of the panel. Oddly enough thereâ€™s no slider for doing the same to stretch out the timeline. Weâ€™ll get to that later though.

Applying effects is an easy drag and drop affair. Just select the clip in the timeline whose effect you want to edit, double click it, and it appears in the source monitor. In Effects Control, you can add, remove, or modify keyframes until you get the effect you want and USUALLY see the changes instantly in the Sequence Monitor. Obviously you need to sync both Sequence and Source Monitors to be viewing the same video to observe them in real time using this method. A very powerful Mac with lots of RAM is your best bet for this to happen. 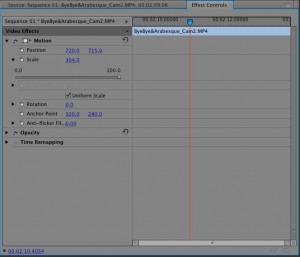 Getting video INTO the program needs to be a pretty good first step and Premiere Pro has support for many different formats including (but not limited to) AVI, DV, FLV (and F4V), GIF, M2T (Sony), MPEG-1, 2, 3, 4, MOV. It also imported some MTS and MOD files from some Canon camcorders I had. Impressive by itself but I was also able to use many of those different formats in the same project. Basically any format I had on hand to record with, Premiere Pro imported it with ease and the built-in effects allowed me to resize and move those different formats to fit within my projectâ€™s dimensions.

Weâ€™ve talked about the interface somewhat (with more to come), getting video into the project, and effects. Now what? How aboutâ€¦

As I said earlier, if youâ€™ve worked with multi-track editors before there wonâ€™t be any big surprises here. There are multiple tracks for audio and video and itâ€™s easy to unlink audio from a video source if you have a master audio track that youâ€™re working from. You can also easily silence any audio track with the push of a button or blank out a video track if you need to see what other video is in the same spot on the timeline. You can show or hide keyframes in each track and adjust many effects (but not all of them unfortunately) right from within the each track. All the basic editing tools are there including a built-in tool to stretch out or slow down individual video tracks. Iâ€™m sure other editors have this too, but with Premiere itâ€™s very easy to find and use.

Multiple camera editing is easy to do and set up although stretching out the timeline to make minor adjustments to sync the tracks up is not as easy as it could be. Thereâ€™s a Zoom Tool that looks like a magnifying glass thatâ€™s meant to stretch out the timeline and in conjunction with the Alt/Opt key you can Zoom back in. Thatâ€™s great but most other editors Iâ€™ve used have a built-in slider (which weirdly enough IS in other parts but not in the timeline) to manipulate how much of it (in relation to time) that you see.

There are all the other typical tools you would expect to see like the Razor tool for trimming, a Rate Stretch Tool for changing the duration of a clip, and many others and they all just work as should be expected in a pro application like this. Some of them are not necessarily needed like the Slide Tool which you can easily do directly in the Timeline when the (Arrow) Selection Tool is being used. Other than my slight quibble about the Zoom Tool, the interface is relatively easy to use and intuitive for a pro editor. Someone not familiar with the basic tools would probably need some hand-holding, but chances are most people getting their feet wet with digital video editing wouldnâ€™t use a program like this at first.

You can easily apply various effects to your clips within the timeline by selecting the clip and adding keyframes to the obvious like Opacity or Size. You can zoom in and out of a clip either immediately or over a time rate of your own choosing. If you need more, you can add color correction, Chroma keying, and many others that are built into the program. I wonâ€™t go over all them here. I found some useful, others too difficult for my meager skills to use. Your mileage will vary.

Premiere Pro is a pro video editing application. What it does, it does very well. Some things were meant to be outside the program and brought inâ€¦ like titles. The built-in titling program in Premiere Pro DOES make titles. Just not any titles youâ€™re likely to be satisfied with. Itâ€™s very basic as in it allows you to make basic text, do some fancy effects with the text itself (no animation though), and make it fade in or out or move around the screen a bit. If you need more than that youâ€™ll need to use companion apps like Adobe Fireworks or Appleâ€™s Motion programs.

Audio is surprising well done in my opinion for the basics. If you need more control or filtering, there are a number of other Adobe (as well as from companies that are not Adobe) products for fine-tuning the sound. I didnâ€™t really need them for this review as the ones with Premiere Pro were good enough for my purposes. If more is required then Adobeâ€™s Audition program will give you finer control and effects.

Exporting your completed project is also very easy and there are a number of different formats to choose from as well as different resolutions and a choice between PAL and NTSC. Once exported, youâ€™ll need to use a different program to move it into YouTube or other video services or create an optical disk.

Adobe stepped up their game with Premiere Pro. For a long time it wasnâ€™t even available for the Mac, but with many editors dissatisfied with the direction Final Cut Pro was taking with version X, Adobe is hoping they will come over o their side of the fence. If youâ€™re moving from FCP 7, thereâ€™s a lot youâ€™ll find familiar with Premiere Pro and many of the things FCP X was unable to do until recently. Some things holding it back would be price as compared to Final Cut Pro and the need for more expensive tools from Adobe to do the same kind of things that Motion does for much less. Your preferred work flow is probably more of a deciding factor though.