Pinball Shuffle
App Developer: Nuclear Nova Software
Version Reviewed: 1.01
License: US$0.99 This app is designed for both iPhone and iPad devices with iOS 4.3 or later

The Who sang about a Pinball Wizard, while generations of teenagers spent countless hours playing the latest selection of pinball machines. 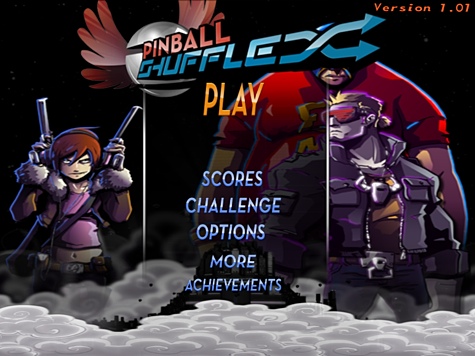 As gaming and casual entertainment changed over the years we saw a shift from the traditional amusement hall to the home. Besides a few remaining establishments and a very lucrative collectors market, the humble pinball machine has almost faded into obscurity amongst this generation of gamers.

Pinball Shuffle is the continuation to the previously released Pinball Massacre. There is a story line involved that links both games but the first game is not a prerequisite. I actually found the story line to be distracting from just wanting to get in and play the game. The developer has included an Options Menu that allows you to disable cutscenes, sound, music, and the fixed camera view.

The game has three possible skill levels to select. The pace of the game increases accordingly, and you will find your concentration and reflexes are put to the test.

What makes Pinball Shuffle unique is the three different modes of gameplay that exist within each and every game.

Level Ball will see gamers achieve experience points the longer the ball is in progress. As your points grow so does the level associated with the ball. The higher the level the more points you will generate, along with the ability to pull off more accurate and exciting moves. 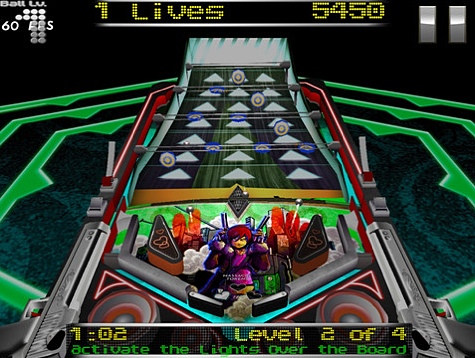 Massacre Mode frantically encourages your virtual flippers to work overtime. You have a short period of time to hit as many targets on the inverted pinball machine as possible. It is a great way to increase your score and retain additional balls when the table converts back to its standard mode.

Boss Battles are an interesting element, but one I have experienced problems with. Once certain achievements are reached a boss will appear on the table. The boss will then move around the table to prevent you from hitting your desired targets or completing the current objective. The problem I experienced was the characters would often disappear off the screen and then when hit with a corresponding ball would not generate points. When this glitch occurred it was also impossible to successfully eliminate the enemy.

Game Center is used as a form of completing achievements, and challenging others from around the world with high scores. The integration with Game Center is welcome but it would have been nice to have more than seven possible achievements to attain.

A welcome feature is the ability to save the game you are currently playing should you need to stop. This allows users to pick up and put down the game at random and play when the time suits. Pausing functionality is also available. When returning from Pause you are given a three second window to prepare to return to gameplay. This is a feature I believe all games should have.

As the game is a universal app I played it on both the iPad and iPhone. I found it much more enjoyable on the iPad. It is functional on the iPhone but you will find the accuracy of finger placements a little challenging.

I found the graphics on both versions to be subpar for what gamers have come to expect on iOS. Jagged edges were present and the game is best played in landscape mode. Portrait mode is simply a rescaling of existing graphics. As such it caused the game to look distorted. This didn’t take away from the gameplay but improvements in this area will certainly make it a more attractive app.

Given that only a single pinball machine table layout is available, I would have expected a much higher graphical quality.

Overall, the game was enjoyable to play. The few problems I experienced are not game destroying but for some people Pinball Shuffle may just not be polished enough. If in doubt, the app developer has released a Lite version so you can try before you buy.

Therefore, I am awarding this iOS game a MyMac.com review rating of 6 out of a possible 10.