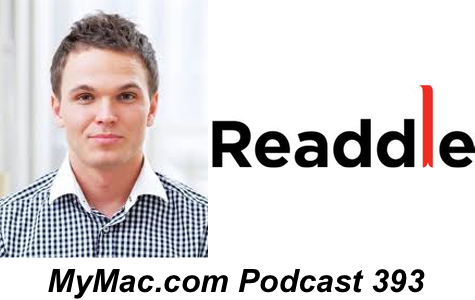 Apple has a new iOS announcement, but that doesn’t come until tomorrow for Guy and Gaz so they have NO idea what it’s going to be. However they’re PRETTY sure it’s a new iPad with gee whiz new stuff in it. Real stretch of the imagination there, however Guy ALSO thinks there will be a special Jimmy Buffet branded one with a built-in Margarita mixing guide! Or maybe that will be saved for the iPad 4. Lastly, the GMen interview all the way from the Ukraine, Denys Zhadannov from Readdle.com about their fantastic iOS apps

The contest sponsors for the 400th episode of the MyMac Podcast are lining up and you guys are going to get some great stuff. Here’s what’s there so far:

Just go to FaceBook and like the MyMac Podcast page andâ€¦that’s it! No other barrier to entry.

Some links:
Readdle.com
Bejeweled by Popcap Games .99 cents. Guy thought it was Bejeweled Blitz but he was wrong!
Spotify by Spotify LTD Free but there are premium services too
This week’s podcast music is from Fresh Body Shop