Apple’s January 19th education event brings the iPad to the forefront as an educational tool to replace textbooks and classroom computers. Â Apple is once again focusing on the K-12 education market, a market it dominated in the early 1980’s with the Apple II. Â But is the iPad really the device Apple is focusing on here? Â Or is there another device in Apple’s future that this event is paving the way for? Â I think Apple needs a new device, I call the ePad. 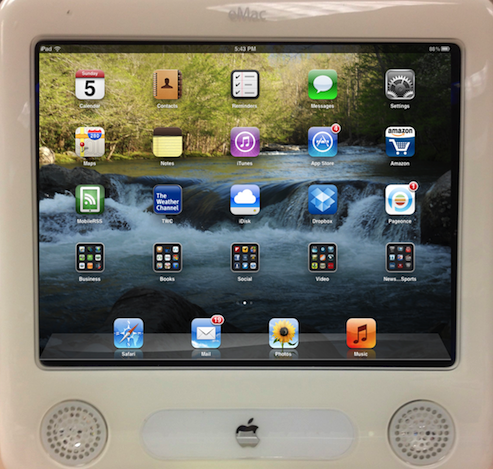 So what is an ePad?

I envision the ePad as a smaller, more rugged, and less expensive iPad. Â Amazon has forged the way for lower priced tablets with its Kindle Fire, which is a 7 inch form factor tablet that they sell for $199. Â The question is, can Apple build an ePad for the education market that they can sell somewhere in the $200-300 range to schools and families? Â I think they can, and here is what I think it could be.

But wait, didn’t Steve tell us that the 7 inch form factor tablet was D.O.A., that it was too small and would have to come with something to sand down our fingertips? Â Yes, but remember, the target audience for the ePad would be children. Â They have smaller fingers already, so they would not have any trouble hitting the smaller touch targets. Â They also have better eyesight, so the higher dpi screen resolution shouldn’t be a factor either.

To keep the cost down, the ePad would come in 8GB and 16GB configurations and be equipped with either an A4 or A5 processor. Â It would also have a front facing camera to be used with Face Time to allow students to collaborate in virtual teams with other students around the world. Â It may also have a rear facing camera for photos and videos for integration into projects.

The other important factor is the housing for the unit. Â It needs to be rugged enough to withstand being dropped or hauled around in a backpack and should have some form of screen protection. Â This is one area where Apple needs to focus on function over form. Remember the eMac, the larger and heavier version of the iMac?

So, will Apple make such a device? Â If they do, will they sell it exclusively to schools, or make it available to the general public? Â I hope they do build it and make it generally available. Â I know I would buy one for my kids (ages 9 and 6).Â They love the iPad already and while I wouldn’t want a 7 inch tablet for myself, I do think it would be the perfect size for students to use.

One thought on “Do Apple’s Education Announcements Pave the Way for the ePad?”