I’ve seen them advertised in the photography magazines to which I subscribe. From the very first ad I thought it was a great idea. Camera straps can be so conspicuous and cumbersome. I’ve taken to wearing my camera/strap like a sling, around my neck, with my right arm through the strap and theÂ  camera hanging down my right side just to keep it out of my way. Unfortunately, that doesn’t always work out for the best. Getting the camera up to eye level when it’s under your arm takes a bit of squiggling and juking to get that pesky arm out of the way.

Welcome, Spider Black Widow Holster Kit made by Shai Gear, LLC. There’s really not a lot to the system, but simple is good. The Spider contains three basic parts: belt, holster, and pad with adjustable loop. 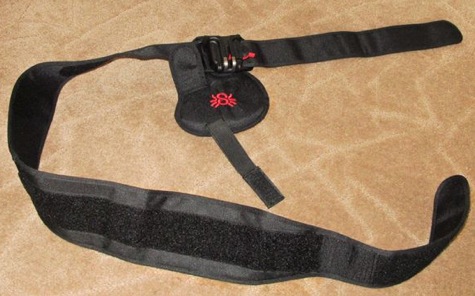 The kit comes with a threaded metal pin and washer that screws into the tripod mount underneath almost all cameras, including video cameras 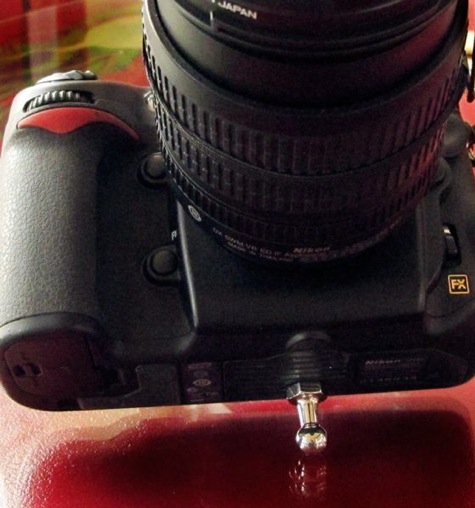 The pin is what keeps the camera firmly connected to the holster. Spider recommends tightening the pin with a wrench (not included) to keep it in place. The red quick lock/release mechanism on the side of the holster locks the camera in place. 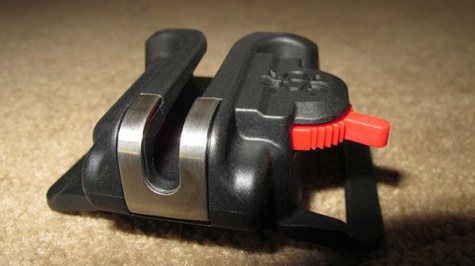 A simple lift of the red lever with the left hand allows the photographer to slide the camera up and out of the holster in one quick move. It’s a simple system that works very well. The only drawback in the quick release is that it takes two hands to release the camera; one hand pulling up the red release lever and the other hand lifting the camera smoothly out of the holster. There is a screw in the rear of the holster that can lock the release to the “open” position so that the camera can be drawn out one-handed. 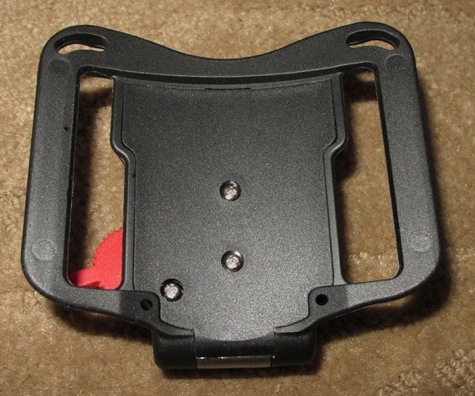 This feature is not recommended by the manufacturer for the simple reason that the camera can come out a little too easily. I’ve given some thought to making it a locked but one-handed grab by releasing the camera with the thumb while the hand pull the camera up and out. No way. It is not designed like that.

Perhaps Spider can come up with a spring-loaded lock strong enough to hold the camera in place but easy enough to pull it out of the holster without the left hand getting involved. I venture to guess that the company probably gave it some thought and came up with the present configuration. It’s not bad at all. Eliminating that one move with the left hand could save me countless nanoseconds over the lifetime of the product.

Shai Gear made this Black Widow Holster Kit with belt for point and shoot and smaller DSLR cameras. It is designated for up to four pounds of camera and lens. Professional photographers, with their larger pro cameras, need to get Shai Gear’s Spider Pro which can safely and comfortably carry more weight and size, from five pounds and up.

I have a Nikon D700 which is used by some pros, but mostly by advanced enthusiasts and semi-pros like myself. It’s not a particularly small DSLR, but it is not as large and heavy as the Nikon D3s or the Canon EOS-1D Mark IV, which have quite a bit more heft and area to them. 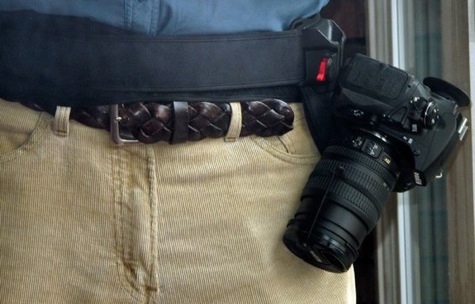 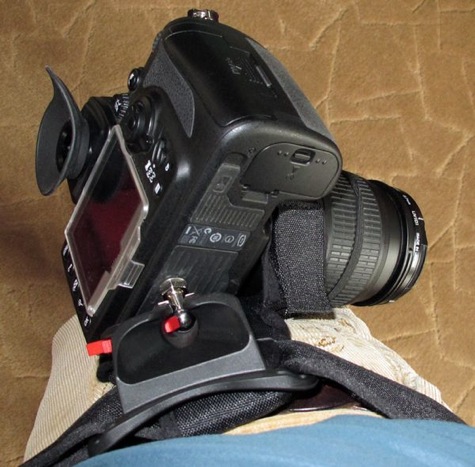 With my D700 now dangling at my side I feel the freedom of having both arms/hands available with my camera attached to me but out of the way. I set up some shots. I reach over with my left hand, lift the red release lever, and pull the Nikon out of the holster in one smooth move. I feel like Wyatt Earp with an Ansel Adams complex. After the shot the camera goes smoothly back into the holster, locked safely away and ready for the next shot. There’s a bird I want to photograph. I lift the lever, slip the camera up and out, turning it on at the same time (I’m getting good at this), lift it to my eye and, pow, I get the shot. I almost want to blow the smoke out of the lens.

Would I have gotten the shot if the camera was dangling on a ubiquitous camera strap against my chest/stomach? Sure. But it’s not nearly as comfortable. Have you ever walked around with your camera dangling down front, swaying and banging your body with every step, strap digging into the back of your neck, not to mention getting in the way of the shot? Of course you have. Not only does it get old real quick, but you look conspicuously like a tourist, or a nerd, or a nerdy tourist. With the Spider Holster you look cool. You’re ready. Relaxed. There’s no strap to get in the way. Your neck feels better, and the girls just have to ask you about it. “Oh, are you a professional photographer?” Yeah, that’s me with my little Canon G11 point and shoot hanging off my Spider Holster.

And speaking of point and shoot cameras, if I can use this setup with my Nikon D700 DSLR sporting an 18-105mm zoom lens it’s even easier to use with my Canon G11. I usually carry the G11 in a zippered Lowepro protective case attached to my belt. It goes with me everywhere. The G11 is really too big for a pocket. But when I get to where I want to be I can now place the camera in the Spider Holster and forget the zippers. It will be much faster and easier to handle without all that unzipping and fishing out the camera when I know I’ll be needing it for a while. I won’t have to use the whole system; just the holster attached to my own belt if I like.

That’s one of the great features of this system. You can use the parts individually or all together. The system even comes with the Black Widow Pad which holds the (longer) lens with elasticized velcro straps when needed and offers some padding between your body and camera. If you’re going to be hiking, climbing, or running around, this Pad keeps the whole rig more secure and rigid. It works very well on my 18-105mm zoom, but the straps are not long enough or the Pad is not wide enough to offer any appreciable support for my longer 200mm. Shai Gear’s Spider Pro series is more suitable for lenses of that ilk.

Nothing can take the place of a good camera bag with lots of protection when you’re traveling. It’s a must. But when you get to the shoot and you’re all set up, you’re going to need your camera available on command throughout the day. No need to put it back in the bag when it’s not needed. Just put it in your Spider Holster and it’s ready whenever you are. This system is the way to go. There should be nothing to keep you from taking advantage of this “I wish I’d thought of that” product. The Spider Black Widow Holster and Belt takes up almost no room so it can be stowed in the camera bag with the rest of your gear if you like, or in an overnight bag, or even a purse. I know I won’t be going on any more shoots without it. Why would I want to?

The whole system works very well and does exactly what it was designed to do. One footnote:

The pin that makes the whole system work is simple enough to use, but would not necessarily be kept on the camera indefinitely. When it’s removed from the camera there is no place to stow it. Shai Gear could have included a little pocket of some sort, either sewn into the belt or attached to the holster, to keep the pin and washer safe until the next use. This is an oversight, but there is little doubt that lost pins will become a problem for at least a few photographers. I hope that the future iterations of this wonderful system has a “keeper” of some sort for that small and very losable pin and washer set.