Flashlight – 4 in 1
App Developer: AppAnnex
Version Reviewed: 2.2.1
License: US$0.99 for iPhone. Some functionality is available on iPod touch and iPad. Requires iOS 4.0 or later.

If you’re scared of the dark or don’t wish to run into that spider web on the way to your car at night then this app may appeal to you. 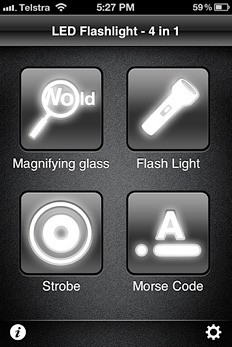 Since the release of iPhone 4 with the included LED flash, developers have been creating flashlight applications for the iOS App Store. The result has been a large volume of both free and paid offerings.

Flashlight – 4 in 1 is not free but is available for US$0.99. This app is not just a simple flashlight. It is a 4 in 1 solution that incorporates a Flashlight, Magnifying Glass, Strobe, and Morse Code functionality. 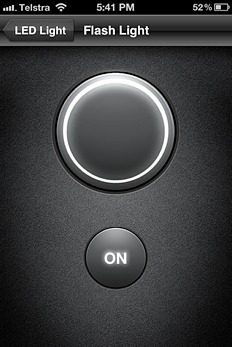 Flashlight: This feature gives users the ability through an on/off switch to have the iPhone LED light constantly active. It should be noted that once you leave the application the light will not remain on. Tapping on the virtual button above the on/off switch will allow users to temporarily activate or deactivate the flashlight. 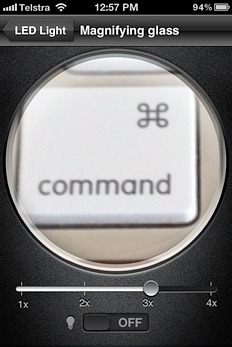 Magnifying Glass: Users can magnify up to 4x with the LED light either on or off. Tap, pinch, and zoom functionality assists the user to easily adjust the magnification. Throughout the process the lens automatically refocuses to present the image as sharply as possible. This feature will certainly assist anyone with visual difficulties. 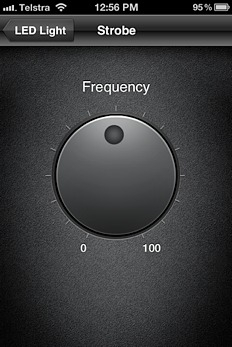 Strobe: Users needing access to a light that constantly flashes at various frequencies can use the strobe functionality. There is a fine control button giving you the ability to change the frequency. One disappointment is no safety warning has been issued with relation to the severity of Strobe Lights and Epilepsy. 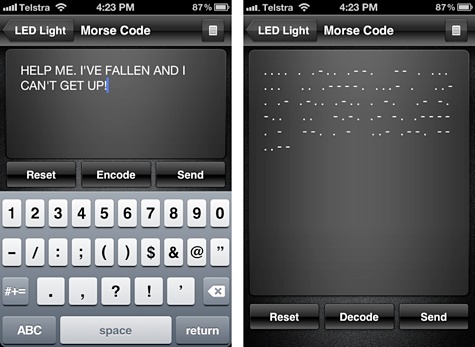 Morse Code: If you have ever admired Morse Code and the influence it had on communication techniques in history then you will enjoy this function. Users will simply type a message they wish to send via Morse Code and upon tapping the Encode button the message will be transformed. Tapping Send will cause the LED light to flash as it relays the code. If you have the sound effects turned on you will hear the traditional Morse Code beeps in synchronization with the light flashes. Morse Code statements are also saved and can be recalled when needed. They will also continue to repeat the same message until the user selects stop, closes the app, or the battery is depleted.

Throughout testing the battery consumption of both the Flashlight and Morse Code functions depleted battery life by 42% per hour of continuous usage. Magnification with the LED light on reduced the battery by 48 percent whilst Strobe used 36% of battery life per hour.

LED Flashlight 4 in 1 is a solid app that performs as advertised. The developer has managed to expand the functionality of a standard flashlight app to include additional useful features. The only disappointment was the absence of a safety warning when using the Strobe lighting functionality.

Therefore, I am awarding this a MyMac.com review rating of 9 out of a possible 10.

One thought on “Flashlight – 4 in 1. Flashlight, Strobe, Morse Code, and Lighted Magnifier
Review”