When I’m not working as a writer, I teach high school biology and physics. Putting together a reading list for young scientists is easy enough for biology thanks to the wide variety of books written about natural history and human biology. But when it comes to physics, outside of astronomy there really isn’t a huge amount to choose from. Relatively few authors have put together accessible books on things like Newtonian mechanics or basic electrical engineering, perhaps because these subjects aren’t particularly photogenic. It’s easy enough to illustrate a book about the stars and planets, but how would you illustrate a book about Newton’s laws of motion? 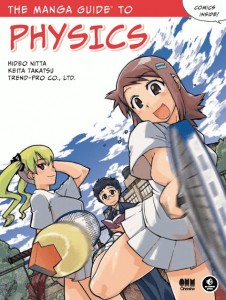 No Starch Press now has a series of manga-style books that may plug this gap. Each weighs in at around two-hundred pages a piece and covers a particular aspects of physics, mathematics and biochemistry. Priced from $19.95 to $24.95, several of the titles are also available as $15.95 PDF-format e-books. As both a geek and a teacher, I was very interested in trying out these books to see if it really was possible to explain complex subjects in the medium of a manga-style comic book.

Upon request, No Starch Press sent me four volumes, the Manga Guide to Electricity, the Manga Guide to Physics, the Manga Guide to Statistics, and the Manga Guide to the Universe. Besides looking over them myself, I passed them around the science department at the school where I teach, soliciting opinions on their breadth and accessibility for students in the 15-18 age range. In UK terms, that corresponds to GCSE and A-Level education, broadly equivalent to the high school in the US. Overall our impressions were rather similar, with the books being praised for their scientific accuracy and originality, but with some reservations about how accessible they’d be to students in this age group. Despite being put together in a cartoon format, the books themselves are information-rich and quite densely worded. The cartoon format itself isn’t always the best way to present complex arguments such as logical deductions, and sometimes the reader will need to go back a few pages and re-read a section before fully understanding it. Indeed, some of the most difficult bits are presented in straightforward text sections a few pages long interspersed throughout each book.

While these books do differ in content, they’re put together and presented in much the same way. As manga novels of a sort, the scientific expositions are framed within humorous and often romantic narratives. This is presumably meant to draw the teenage reader into the book and keep their attention throughout, and given their basic premise as academic works, this sleight of hand actually works rather well. There aren’t many belly laughs, but the usual staples of manga fiction will be found here: rivalry between students, romance, misunderstandings, slapstick humour and technological wizardry.

But what did the students themselves think? One of the first things they noticed was that the books were printed in the standard western format rather than the traditional “back to front” format used by Japanese manga. Older and higher ability students rather liked the books, but the weaker students found the manga approach surprisingly difficult to follow. While the books had indices, topics were often discussed in more than one place, making them a bit less easy to revise from. Students in the 15-16 age range in particular liked the idea but didn’t think that the books were any easier to read or understand than a plain vanilla GCSE revision guide. But on the other hand, the older A-level students in the 17-18 age range liked the books, especially those books detailing subjects the particular student happened to like anyway. 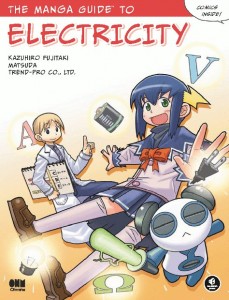 In fairness to No Starch, testing the books out on high school students was perhaps a bit of stiff test; the books would appear to be written more for those in the 17-21 age range than anyone younger, and scholars older than that would likely find them very useful indeed. To be honest, I enjoyed using these books as a teacher; they made excellent quick-check books for refreshing my memory on topics I was going to teach in the upcoming week. The very nature of the manga format means that much of what’s explained is described through activities rather than conversation, and this can be of great use when coming up with ideas for demonstrations and practicals.

The bottom line is that these books are good value and work well as study guides for advanced students and teachers. But they aren’t “easy reads” by any standards, and while fun and attractively laid out, they’re unlikely to provide much assistance to weak students lacking motivation and basic understanding. Recommended and rated an easy 8/10.