OK, Apple is running a new contest. The person to download the 10 billionth app will receive an iTunes gift card worth $10,000. Obviously Iâ€™M going to win this contest so no one will need to bother to even consider their worthiness. Why am I so confident? Itâ€™s all in the math baby! Let me explain. 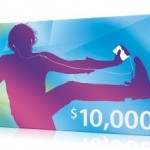 Apple has a counter showing approximately how many apps have been sold. At the time I wrote this, this counter was at about 9,769,000,000 leaving roughly 261 million apps to be sold before a winner is declared. Seems like a lot of apps and it is, HOWEVER if you watch the counter closely, youâ€™ll notice that about 1000 apps are being sold every 3 seconds. So letâ€™s do the math!

Of course this is complete rubbish since the number of apps sold isnâ€™t a constant no matter what the stupid counter at Apple.com says so we are left with three conclusions:

1. I have WAY too much time on my hands (this is indisputable by the way)
2. Iâ€™m not the only one who knows how to do math so I expect a surge of app buying probably starting around Sunday morning on the 23rd. (a possibility that canâ€™t be ruled out since the same thing happened the last time Apple ran an iTunes ridiculous number of whatevers sold contest)
3. The winner will pretty much be random (it SHOULD still be me though)

So what will YOU be doing on the 23rd of January thatâ€™s so important? I bet more than a fair share of people will have a list of apps they want that theyâ€™ll probably hold off on until the counter gets stupid close.

Also if you’re going to the Macworld Expo, make sure you’re there on Saturday the 29th because Tim and I are going to be on the Main Stage from 12 noon to 1PM for a combined MyMac and TechFan podcast show. It’s going to be great even if neither of us have a clue yet as to what we’re going to do! Fortunately that has never stopped us before!

One thought on “Apple has a 10 billionth app sold contest and I’m going to WIN!”