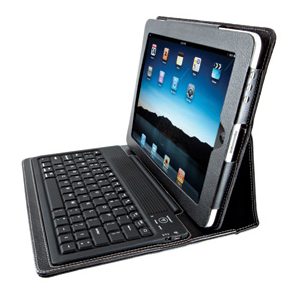 A new breed of iPad cover is about to hit the stores. These covers have integrated keyboards and make the combination of iPad and keyboard look and act a bit like a netbook. I was lucky enough to get a pre-release version of the Kensington KeyFolio Bluetooth and case for the iPad.

The case is made of durable synthetic leather that fully protects your iPad. The unit feels very sturdy and it should hold up quite well over the long term. Your iPad slides into the cover and there is a flap that holds it in place. With my iPad in the case the KeyFolio felt heavier than I thought it would, but it was not too heavy to comfortably carrier around. The spine of the unit is quite square and that did tend to bother my hand when carrying the KeyFolio for long periods of time. A rounded edge would work better.

I took the unit to work with me and carried it around for a couple of days and I had absolutely no concerns about the iPad slipping out of the case. The reaction to the KeyFolio from my fellow employees was extremely positive. 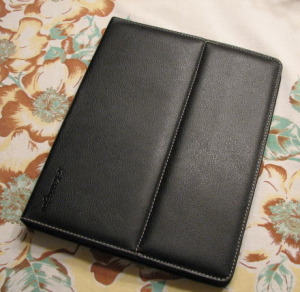 I have decided to type the rest of this review on the KeyFolio which I am using right now.

Your iPad is held in a sleeve that folds out with slots along the bottom that fit into one of several groves above the keyboard. Using these grooves, you can set the viewing angle of the screen. This works pretty well, but I wish I could set the angle a bit steeper than I am able to, however, the pre-set slots are more than adequate for most users.Â The keyboard itself is a rubberized membrane type. While the keyboard size is small it is certainly usable, I am not a touch typist and I don’t know how difficult touch typing might be since the keys are flat and soft. I find I can type at very near my usual speed. A big plus.

Let’s talk about the keys:

You get a full set of QWERTY keys plus a row of “F” keys at the top. You also get a FN, Control, alt/option, and Command keys. The quote key on a normal keyboard is above the apostrophe key. On the KeyFolio that key is part of a row to the right of the Space Bar which also contains the backslash and some of the cursor keys. Yes, you get a full set of cursor keys. 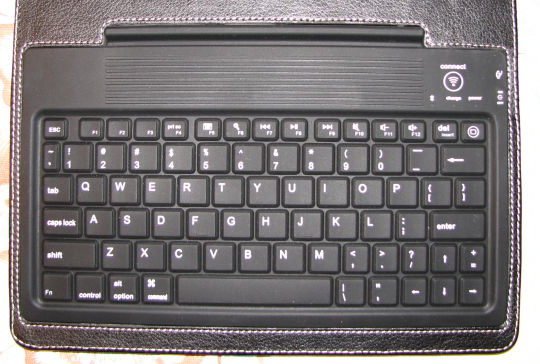 While typing this review and using the KeyFolio it becomes apparent that you do get just about every key a regular keyboard has, but a few are just not in the usual places. For example, I keep pressing the key I think has the quote symbol on it, but I get a semicolon instead. There is a “Caps Lock” key but there is no indicator as to whether it is engaged or not. A minor quibble since I rarely use Caps Lock anyway.Â Above the number row is a set of “F” keys, 1-12. Who would have thought the good folks at Kensington would have spent time designing this keyboard so we could have a complete set of â€œFâ€ keys. This demonstrates the thought put into the product.Â Some of these “F” keys have special functionality when using them in conjunction with the Control key. For example, pressing control F5 brings up the iPad keyboard. Control F6 takes you to the iPad search screen. “F” keys 7-9 are used for video playback, while “F” keys 10-12 adjust audio levels. It would be fabulous if there was a way to assign actions to these “F” keys, actions that would be remembered. Kensington needs an app for that.

One last key I want to mention is the special iPad key on the upper right corner of the KeyFolio. The symbol on this key is a circle with a square in the middle. Pressing this key takes you back to the iPad home screen from anywhere. In an app, watching a video, or on another page within the iPad, this key always take you back to the Home screen. This was a very handy key and kept me from reaching up to touch the screen. The KeyFolio comes with a USB cable that plugs into your iPad charger. There is an LED that shuts off when the unit is fully charged. I have been typing for several hours thus far and I have used the KeyFolio off and on for a few weeks now. I have not had to recharge the unit yet.

I like the KeyFolio. It is very well made and quite capable. However, due to the nature of the iPad itself, I find myself touching the screen a bit more than I thought I would. The case would benefit from a more curved spine which would make carrying the unit more comfortable, since the case plus iPad adds some weight. Extending the functionality of the “F” keys would be a big plus if Kensington could figure out how to do it. 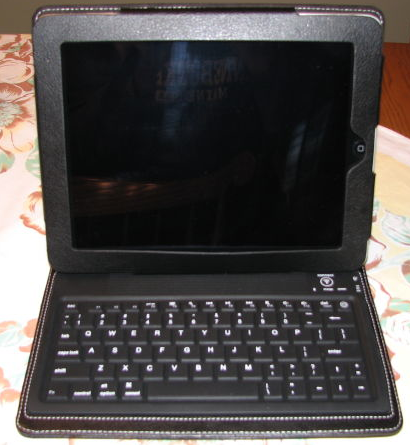 The Kensington KeyFolio is a remarkable product. It is REALLY handy, probably not something you would use all the time, but definitely something to have when you know you may need to do a good amount of typing on the iPad. For people who travel, this is a must have accessory.Â  The more I use my iPad, the more I realize the many things I can accomplish with it. I have noticed that I need several different cases for different scenarios. For travel, general typing, and entering information by hand, you canâ€™t beat the KeyFolio.