I consider myself fairly tech-savvy. I own the latest Android Smartphone, a literal cornucopia of iPods, several digital cameras, photo printers, and I pride myself on my Pentagon-level WIFI security settings. I was designing HTML and Perl code around the same age I learned the value of deodorant. In other words, Iâ€™m fairly certain I could ace the Certified Techno Nerd test, if there was one. That might be why so many of my friends were shocked when I told them that my wife bought me a brand new Sony turntable for my thirtieth birthday (if you are not sure what a turntable even is, Google it now before reading on). Aside from the initial shock that my birthday gift was actually analog for the first time this century, I was first comforted to see that the machine had a USB ports some of the best turntables nowadays doâ€“ a bridge to the digital age we now live in, and possibly the only recognizable part of the machine for those twenty-five or younger. 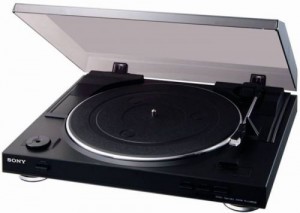 I grew up listening to my dadâ€™s Beatles albums on vinyl. December was always marked by dusting off the faded, scratched Christmas albums. Watching the records spin and hearing the hiss and pop between tracks is a fond memory of my childhood, and my obsession with music borders on spiritual at times. The ability to recapture part of my childhood and enjoy a passion of mine in a fresh way was thrilling. Unfortunately, I had to borrow albums from my parents and father-in-law just to use the darn thing the first week. It was this experience that reintroduced me to music I thought I knew well and expanded my musical horizons even further. Iâ€™m almost ashamed to admit that this old school, arrogant music-appreciation junkie ever allowed himself to be corrupted by digital music in the first place.

Iâ€™ve always heard that even the best MP3 compression removes details from music that cannot be recovered with even the best audio equipment. I always believed this to be true but accepted the compromise for the sake of convenience. I mean â€“ come on, I can fit hundreds of albums on my iPod and take them with me everywhere. Unfortunately, I made the all-too-familiar mistake of allowing the iPod and the MP3 format to become my only means for experiencing music. I could plug the iPod into my car, my work speakers, and my computer. Even my modest mid-range home stereo seduced me with an audio-in jack right there on the front of the receiver.Â  And like that, my ears surrendered true sound quality for years. Then I played an untouched vinyl of Dark Side of the Moon for the first time. Whoa. I also enjoyed B.B. Kingâ€™s Take it Home. Nice. Then some Beatles albums, some Chicago, The Byrds, and a Motown five-album collection I scored from a local bookstore. Almost every album I had heard before, on CD or MP3. This experience was completely new, however, because the sound was so rich and true to life. Every detail seemed crisp. Iâ€™ve heard Dark Side of the Moon literally hundreds of times, and always wanted to compare the digital to the true vinyl. There is no comparison; the vinyl audio has a palpable clarity and reality that even a digitally adulterated ear could recognize almost immediately. This music was produced for this medium. I figured I would try something more modern, so I purchased Cosmic Egg by Wolfmother. The album, like many newer titles produced on vinyl, had the added pleasure of tracks not available on the CD release. The production quality on the 180-gram vinyl was exceptional. â€œViolence of the Sunâ€ actually sounded epic, captured in a way I feel the artist genuinely envisioned it.

Some say iTunes killed the concept album. Itâ€™s unfortunate, but partly true. It may have killed the album itself, which has been dying slowly since the compact disc format took hold as a standard. Appleâ€™s iTunes and the popularity of the MP3 format before it helped bring about the destruction of the album as a method of musical expression. Itâ€™s a world of mix playlists and singles releases now. Sure, you can hear Bostonâ€™s â€œCool the Enginesâ€ on their best-selling Greatest Hits CD, but you are missing something if you never hear it in the context of the Third Stage album. There is a reason why Pink Floyd and AC/DC defended the album concept, with limited success, by refusing to sell their songs on services like iTunes (one can argue Pink Floyd is somewhat hypocritical in this regard, seeing their compilation CD release Echoes in 2001).Â  Apple has made attempts to bring about compromise with its Genius services and â€œComplete My Albumâ€ offerings, but the nature of the beast simply promotes the behavior itself. Studying my own digital collection I was shocked to see just how many â€œbest ofâ€ CDs and MP3 mix playlists I have. A vinyl record, by design, commands an album-length review. Once I played some classic vinyl where my â€œbest ofâ€ CDs pulled from, I discovered a host of incredible music, some of it I had sadly never even heard before. Vinyl takes you beyond the â€œTop 25â€ iTunes list for an artist and into the deeper tracks you simply might not venture into on your own. Itâ€™s an ear-opening exercise. Surely it canâ€™t offer promise to enhance the experience for the Justin Beiber bubble-gum pop of todayâ€™s FM radio, but it can take you into the catalog of classic blues, jazz, and pop that you would not have discovered before. You can hear classic rock the way it was meant to be experienced. A few pops and scratches on a gently used album only add character to Motown classics.

Donâ€™t knock vinyl as archaic or outdated, either. Hosts of audiophiles fill the blogosphere with countless discussions of the benefits of analog music, often clashing with technophiles in ways that rival the â€œbest oil change intervalâ€ arguments on auto shop boards. And while the technologically feasible frequency ranges of vinyl versus digital can be discussed in detail, itâ€™s best simply to let your own ears decide. Itâ€™s improper to refer to the technology as antiquated. Sony and other manufacturers still take the niche market seriously, making quality components and accessories that are easy to find and relatively inexpensive. Record stores â€“ real record stores â€“ are making a comeback of sorts, especially in the big culture cities like Austin, San Francisco, and New York. More and more young people are discovering vinyl as a better match for their musical ears than CDs and MP3s. Newer music is even being produced with vinyl editions in mind (dig in to your local music scene). As the music industry falls apart under its own weigh of sub-par, digitally manufactured pop, it might do itself good to revisit the practices and benefits of its golden age.

I wonâ€™t be getting rid of my iPod or canceling my iTunes account anytime soon. There is no turning back from this technology, and it certainly has a place in any musical catalog. iTunes has allowed music to reach more people in more ways than ever before. The technology could learn something from the vinyl days, however. Instead of building playlists, try examining an album in-depth or looking for those deeper tracks that others miss. Use the technology as a springboard to opening your eyes to something new or different. If you like what you find and want to really explore music in an exciting, albeit archaic way, look into a quality turntable and visit your local used book store or record store (if you are lucky enough to live near one). For $3-$5 an album you can discover an almost unlimited supply of great music. Take a break from the pace of the digital age for a while, slow down, and really enjoy music again.

4 thoughts on “Records in the age of MP3”