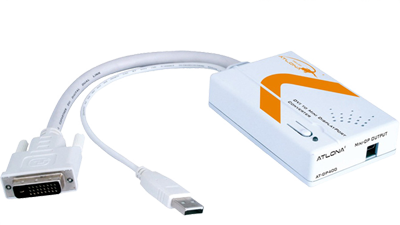 When Apple introduced the 24" Cinema Display, it did not include the very common DVI input, and instead replaced it with Mini DisplayPort. This apparently inexplicable decision caused much wailing and gnashing of teeth in the Macintosh community, as many potential purchasers for Cinema Displays don’t have Mini DisplayPort-capable computers.

As of this writing (3/26/2010) all Macintoshes have Mini DisplayPort-out monitor connectors. But if your Mac is older than late-2008, it does not have a Mini DisplayPort output, and so can’t drive the new Cinema Displays.

What’s a geek to do when she or he craves a 24" Cinema Display, but their Mac is just a bit too long in the tooth? For that matter, what if you want a Cinema Display for your DVI-equipped PC? Atlona has introduced the Atlona (Dual Link) DVI to Mini DisplayPort Converter (USB-Powered).

The Weeks Division of MyMac Labs has been using it with a 24" Cinema Display for the past several days, and has good things to say about it:

I plugged it in to my Mac Pro’s DVI connector, and restarted my Mac Pro. The monitor looked just the same as it did when connected to the Mini DisplayPort connector. It just works.

We could conclude the review right there, but some readers may appreciate a few more details.

The converter box is not much larger than a deck of cards. Out of one narrow end sprouts a 7" USB cable and a 7" DVI cable. Plug these into your Mac or PC, and that completes the installation. No software is required, and that garners extra points from MyMac. No software requirements means that future Apple software updates won’t affect the converter. The computer’s USB port powers the converter, so there is no external power supply to complicate matters. I had no trouble using the USB ports on the Cinema Display, so there’s no shortage of juice from the converter box.

Blu-ray fans will appreciate the fact that the Atlona AT-DP400 converter is HDCP Compliant, which means you can play copy protected material though the converter. Having no Blu-ray player, the Weeks Lab is stuck in the video dark ages, so we could not test this feature.

The converter does not change frame rates, refresh rates, or any color settings. It will handle all resolutions up to 2560×1600. Atlona provides a three year warranty on parts and labor.

You plug it in, start your Mac, and it works. What’s not to like?

The main thing is the $199 cost. Many potential buyers may find that too expensive. At $899, Apple Cinema Displays aren’t cheap. An additional $199 adds 22% to the cost of the display, and that could be a deal breaker for many.

Conclusion. Atlona’s (Dual Link) DVI to Mini DisplayPort Converter worked flawlessly to connect our Mac Pro’s DVI output to our 24" Apple Cinema Display. This is one of the best examples of a complex video signal conversion being done with plug-and-play simplicity.

At $199 retail, cost is the main drawback. But if you need to connect a DVI computer to a Mini DisplayPort monitor, Atlona’s converter works perfectly.