Sometimes the obvious is elusive.

The optical drive in my three-year-old iMac has been doing strange things for several months. I spent an inordinate amount of time pursuing complicated and aggravating remedies before I discovered the $5 solution.

Here are some of the symptoms that were driving me nuts. Using my iMac’s SuperDrive, I would burn a playlist from iTunes. Sometimes I would get a message saying the burn failed because of a “medium” error, or something like that. I was thrilled that the problem was only “medium,” but what in heaven’s name could that mean? Our cryptic friends in Cupertino could have added something to the error message saying what a medium error might be but Geez, think of all the energy that would have required.

I searched around on the Internet and found a dozen different explanations and suggested remedies. The more I looked, the darker the hole became. I soon felt like I’d left Earth’s gravity behind and seemed to be spinning in concentric circles. The suggestions ranged from updating the drive’s firmware to employing incantations. I thought, this is crazy; it can’t be that complicated.

Sometimes the drive would burn a whole playlist, seemingly without a hitch, but if I then reinserted that CD, the SuperDrive would tell me the disc was blank. If I took the same disc and inserted it into my MacBook, the files would show up and play. They were there all along. The drive in the iMac just couldn’t see them.

At other times, the drive might copy the playlist but in a weird order. And then there were the odd occasions when it would simply work the way a normal drive should.

Since I had already replaced this drive once and the second one was still under warranty, I called the shop where I had purchased it. That turned out to be singularly unsatisfying. I was told the drive would be replaced for free but there’d be an installation fee of $90 or $100. Thanks but no thanks. What happens if you replace this drive and it fails in a few months? How many times do I pay the labor fee? But I never actually said that. I just stewed.

I toyed with the idea of eliminating the labor fee by opening the iMac myself, removing the drive and bringing that in for replacement. I found some videos on YouTube that showed how to do it. I thought, I can do this. Then I watched the video again and talked to some friends and thought, this guy (on the video) looks like he’s done this 50 times before (even though he appeared to be a young teenager). I’ve never peeled one of these things apart. At what point will I discover that I’ve taken on more grief than I need?

Next step: Hey, how about buying an external DVD-RW drive? The cost would be less than the labor for replacing the SuperDrive, and external drives are nice because you can easily use them on several computers. A lot come with both USB2 and FireWire connections, though many people say the difference in speed is barely detectable. MyMac reviews editor John Nemo let me borrow his to see how I liked it. It was an older LaCie, 16X, actually manufactured by Samsung. It was completely silent and performed beautifully, but I couldn’t find one locally so I bought a Pioneer instead.

I brought it home and plugged it in. That’s when I heard the obnoxious whirring of a noisy fan. The unit sounded like a 10-year-old-computer with bad lungs. The whirring started to make me crazy. The computer shop (the same place that had replaced my SuperDrive) was probably sick of seeing me (I certainly hope so), but they did give me a complete refund.

Finally, I had a talk with my friend Hugh down in Australia. He actually lives in PC land and knows nothing about Macs. His real strength is related to his frugality. He works on PCs all the time and his first approach is always the simplest and cheapest. He said, “How do you know you’re not just dealing with some dust on the drive’s laser lens? Try cleaning it and see what happens.” 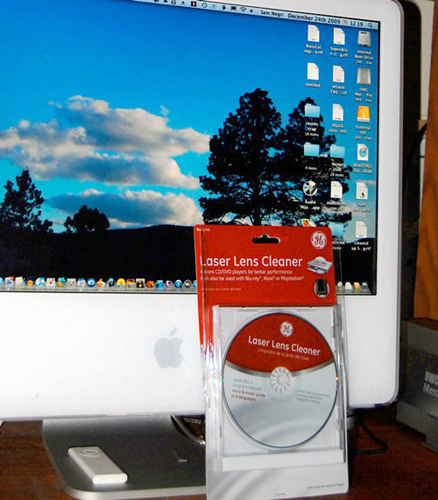 A CD laser lens cleaner looks like an ordinary CD. Naturally, I couldn’t find the one I’d bought years ago, so I went to Target and sprung for $5. I put it in the drive and let it spin around for about 20 or 30 seconds. Then it stopped and ejected.

That turned out to be the solution. The drive once again reads and writes.