Iâ€™m sure by now youâ€™ve probably read countless reviews about the new line of unibody MacBook Pros. Maybe even drooled a little, were you lucky enough to get your hands on one at a nearby Apple store. I wonâ€™t bore you now with details of its long list of attributes, not that some or most of them arenâ€™t true.

Instead, Iâ€™m going to give you a working account of how the MacBook Pro stands up in the workplace, and the delights and difficulties of switching from a MacBook to a MacBook Pro. 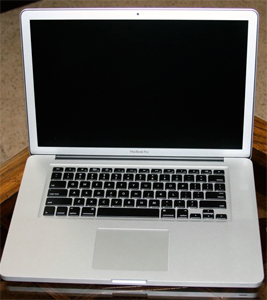 My MacBook which I upgraded from was only a year and half old, and was still serving me very well, but I found myself traveling quite a bit and doing a bit of ocean hopping to boot. All of a sudden a desktop machine and 13â€ laptop didnâ€™t quite fit my needs. I had looked at the new MacBook Pro line when they first came on the market in late 2008, and eye catching as they were with their beautiful gloss screens, being a designer and photographer the gloss screen was a deal breaker for me. I was aware that there were third party screen clings that I could attach to the screen to give it a matte effect, but I wasnâ€™t prepared to do that. I waited it out until Apple saw sense to offer a matte screen for the rest of us, and finally they did.

From the moment of un-boxing (see photos) there has been no doubt that this machine is truly a thing of beauty. Before even turning it on I had a clear cover snapped in place so as to protect its aluminum casing. Itâ€™s the little things that delight me, such as how the keyboard lights up so I can type in low light conditions, how the speakers are to the side of the keyboard, even how I can rest my hands on either side of the trackpad while typing.

Itâ€™s a shame that in offering the matte screen Apple was not able to maintain the glass effect of the screen running to the very edge as with the gloss option. The matte screen has a aluminum beveled edge all the way around. But thatâ€™s as far as the negatives go with this screen, if you could call that a negative. I certainly donâ€™t.

The quality of the screen was extremely important for me because this was now going to be my main machine. That meant I would now not only be using it for design work, but also for photo editing. When designing for print, designers rely on the Pantone system for color accuracy rather than the screen, but when it comes to photography the screen is of utmost importance.

This screen is amazing. I love it. The colors are vibrant but true. The same can be said for when I popped in the movie The Italian Job. I love the screen with the Mini Cooper car chase, as anyone familiar with the movie knows what Iâ€™m talking about. I didnâ€™t notice any pixilation in any of the high speed scenes. Thereâ€™s also pretty good viewing from side angles, which is nice if more than one person is huddled around watching the action.

Iâ€™ve mentioned the delights â€” now for the difficulties, and yes, there are a few. What the new large buttonless trackpad has in aesthetics it lacks in user friendless, shall we say. Being what I would consider a master trackpad user, I am finding this new sleek style hard to get used to. Itâ€™s incredibly responsive, almost to the point that a slight brush of your hand has you all over the screen. The new rotate, zoom in and out, and swipe to navigate features are great. These options can also be used for ExposÃ© and switching applications which is pretty cool too. Iâ€™m a big keyboard shortcuts fan so anything that enables me to use a mouse less frequently is important.

The trackpad on this MacBook Pro is quite a bit larger than the MacBook I was accustomed to, and takes a bit of getting used to. The button on the trackpad, while not seen as any different from the scrolling area, is still in the usual place, but a lot more accuracy is needed when clicking it. If you donâ€™t click directly on what is considered the button, the trackpad clicks but nothing happens.

Initially I discovered that when it came to the trackpad my fingers never seemed to quite reach that sweet spot, but now that Iâ€™ve learned that I need to click almost at the edge where the pad and the aluminum meet, weâ€™re getting along much better. Iâ€™m afraid the same canâ€™t be said for the secondary or right click button, which Iâ€™ve set up in the right hand corner. That seems to extend half way out, and be it my small hands, but I keep hitting it by accident, causing pop up menus to jump up at me. A little annoying to say the least, hence the use of a wireless mouse when at all possible.

These are all teething problems that will no doubt in time iron themselves out, although I never thought I would miss the physical button on the old trackpad.

Iâ€™ve also found the F keys not to my liking but with the help of a free little preference pane application called Function Flip Iâ€™ve now been able to re-customize them to work the way I want them to without having to use the fn. key. Iâ€™m a big Spaces user and always have an F key set to activate my many desktops.

Apart from those little things, the 15â€ screen is the perfect size when on the go. Itâ€™s large enough for the editing work that I do but not too big for carrying around, and itâ€™s surprisingly light and thin for its size. In the event that I do need a larger screen I also purchased the DVI adapter for connecting it to a monitor. I also upgraded the hard drive from the standard issue to 320GB 7200rpm, which is fast, and so worth it for those of you wondering about upgrading to 7200rpm.

No surprise when I say I donâ€™t get the seven hour battery life that Apple claims, but I can still get a good four to four and half hours of life untethered to a power cord â€” no complaining on that issue. And did I mention itâ€™s just beautiful? I can work with the trackpad, and Iâ€™ll even learn to master it like trackpads of past, because while I can remain impartial and recognize that it may have some faults, at the end of the day nothing else works like a Mac. This Mac Girl is sticking with hers, trackpad and all.