On the surface, the Pre seems to have everything a modern smart phone should have. I have to give credit to the, mostly Apple trained and inspired, design team at Palm. The Pre seems to have been thoughtfully planned and executed to provide a nice combination of hardware and software to give the user coming from the Palm OS, Windows Mobile, Symbian, and the many other generic phone operating systems, a much improved mobile operating environment. In fact, the Pre integrates some of the Apple-sdk multi-touch features into the their WebOS operating system (Are you listening Mr. D. Rosenberg?). 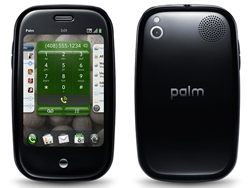 Compared to the above mentioned mobile operating systems, the Pre is quite an evolution from the, slightly better than DOS mobile experiences which seemed to have crossed the ocean blue in 1492. Color me impressed with the seemingly fine effort from Palm. I say seemingly because, very few have been allowed to actually review the unit in an untethered unsupervised environment. So we will have to see if Palm will be able to deliver the promise of the hype.

IMITATION IS THE SINCEREST FORM OF FLATTERY

So imitation is supposed to be the sincerest form of flattery. Yeah, that is cute and all, however, the REAL thing is still KING! (that has a nice ring, no pun) The problem with imitation is that it rarely measures up to the original. How many times have we heard a “tribute” Â band sing one of our favorite songs only to become enraged over the destruction of that which we hold sacred? Generally, the imitation starts to lose its appeal when one begins the inevitable comparisons. The folks over at Precentral.com, found an internal AT&T document comparing the Pre and the iPhone 3G: 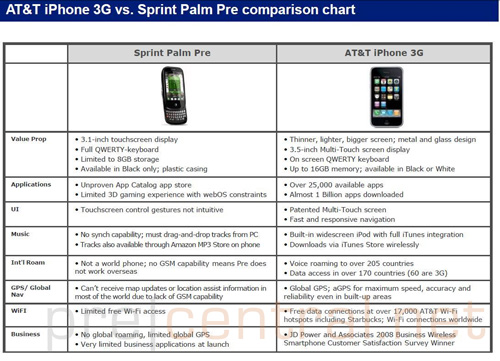 There is of course another problem with imitation. Sans the permission from the original or its creator, it can land one in court or even jail. It is a moot point to debate whether or not any of the Pre’s UI gestures violate the many Apple patents. However, once the Pre has shipped, it would seem likely that at least one Pre will find its way to Cupertino for “evaluation.” Apple has already gone on record regarding the fact that they will defend their patents vigorously. This is something Palm and any potential purchaser of a Pre should think about very carefully.

Let’s set aside the hardware and UI, of the Pre and the iPhone for a moment. Even more important than both of these features, is the ecosystem that surrounds the iPhone and may or may not surround the Pre.

Apple has imagineered (forgive me Walt) their products to harmoniously work within an ecosystem of hardware, software, and a thriving development environment. Whether one purchases a Mac, iPhone, or any other Apple product, their is much more in the box than meets the tearful eyes as one, with video cameras rolling, removes their new Apple product from its ever shrinking packaging. Two features included with every Apple product will be sufficient to settle the argument regarding the choice whether to purchase the still unreleased Pre or the ever maturing iPhone, The iTunes Store and The App Store.