Sure, the iPhone can make fart noises, via over 30 different apps, or even display Big Words on its tiny 3.5” screen. But now, thanks to Ilium Software’s Apples2Oranges, you can literally accomplish the impossible on your iPhone/iPod Touch. Yes, you can actually compare apples to oranges—without being reprimanded by your third-grade math teacher.

How did the folks at Ilium work this latter-day miracle? Basically, they created what I would classify as a unit converter on steroids. While standard converters simply allow one to determine, say, how much the U.S. dollar is worth in Euros, or how many miles one needs to run to finish a 10-kilometer race, Apples2Oranges (A2O) takes the conversion process one step further by allowing you to complete two conversions simultaneously, in order to determine calorie count, price, nutritional value, and numerous other parameters.

The best way to explain how A2O works is by way of example. Let’s say you’re in the local home center (assuming it hasn’t closed down yet) and you’re looking for some heavy-duty trash bags. Ah, here’s a box of 20 for $3.99. Sold. Oh, but wait, here’s a box of 50 on sale for $6.49. OK, so which one do I get? In those dark days prior to the iPhone and A2O, you would have had whip out the pocket calculator and determine the unit price per bag for both boxes manually in order to make a sensible choice. 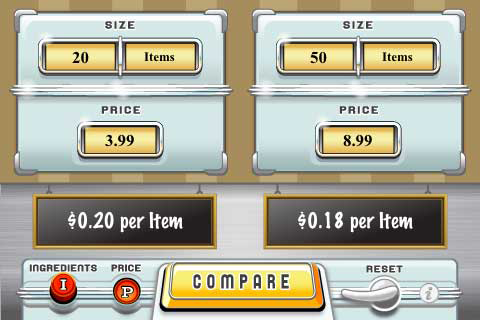 Apples2Oranges just saved me $0.02 on each trash bag I buy. Considering how often I’m compelled to “throw my two cents in,” this could add up to big savings over time. But what’s with that Pachinko machine motif?

A2O doesn’t stop there—it also provides for more complex price comparisons based not merely on per item cost, but on per foot, meter, ounce—even units as esoteric as cubic yard or square meter—while allowing you to easily mix and match the units of measure, which is where the “apples to oranges” analogy really comes into play.

Look, here’s a box of common nails, 22 oz. for $8.99. Here’s another, this one’s 1.5 lbs. for $9.79. Now I’m forced to convert pounds to ounces (or ounces to pounds) first, so that I’m comparing apples to apples. Then I need to calculate the per oz. cost for each box, in order to determine the best value. As you might expect, A2O can handle this scenario without breaking a sweat, as it reveals that the true cost of both boxes happens to work out to exactly the same—$0.41 per ounce. So now I can buy the smaller box with a clear conscience, knowing I’m not missing out on the nail bargain of the century.

Let’s take one more example, this time to demonstrate the “Ingredients” function of A2O, which lets us determine quantities of vitamins, minerals, sodium, carbohydrates, etc. in two different foods, provided we know the serving size—even if one serving is given in ounces and the other in grams. This time, I’m in the supermarket buying some yogurt, and I notice that brand A, the American-made stuff, has 20 mg of sodium per 8 oz. serving. Hmmm…this European brand is more expensive (I already determined that using the Price function, thank you) but I wonder if it has more or less sodium? Unfortunately the serving size of this one is 250 grams, with 25 mg of sodium, and now my head hurts as I try to dope that one out.

Again, it’s A2O to the rescue—I simply enter 8 ounces/20 milligrams on the left, 250 grams/25 milligrams on the right, chant “Pins and needles, needles and pins, A happy shopper, is a shopper who grins” while touching “Compare,” and I am instantly rewarded with the knowledge that the American yogurt is slightly healthier—at least in terms of sodium content—with 2.5 mg per ounce, while its European counterpart contains 2.85 mg of sodium per ounce. Just a few hours with A2O, and I’ve suddenly become a bargain-shopping machine, while simultaneously making the healthiest choices almost effortlessly. 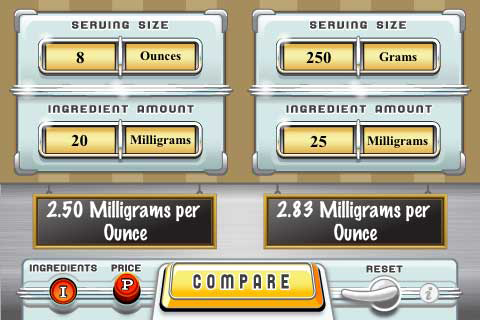 Dueling yogurt brands duke it out, with Brand A on the left accompanied by its 20 mg. of sodium per 8 oz serving. Meanwhile, Brand B has elected to befuddle the average shopper by offering a serving based on the inscrutable UK measurement unit of “grams,” but there’s no stopping A2O in its quest to reveal which brand is the true villain when it comes to inducing sodium-induced hypertension and bloating.

Lest you’ve gotten to thinking that all is perfect in the world of A2O, rest assured that I do have a few gripes. First off, the interface seems to be modeled after the love child of a diner jukebox and a Pachinko machine. It would be great to have 3 or 4 “skins” from which to choose in the settings, as the default and only interface leaves a bit to be desired, in my humble opinion. Next, while the strength and uniqueness of this app comes from the fact that it’s much more than a simple unit converter, why don’t the nice folks at Ilium actually include a basic converter in the mix? There are times when only a simple conversion is needed (how many fluid ounces are in a tablespoon?), but for that I need to leave A2O for another app. Seems like every type of measurement unit known to man (both English and metric) is already available, so a unit converter would make a wonderful and truly useful bonus.

In the course of doing various comparisons and conversions, I found it curious that although there is a dollar sign on the keyboard, entering one in price calculations neutralizes said calculation without any warning to the user. So typing “15.” or “15.00” as a price works as expected, but entering “$15” or “$15.00” results in “0.00” for whatever measurement unit you’ve chosen. Once I realized this I knew to steer clear of the “$”, but it might be helpful to disallow input of the “$” or provide a warning to that effect.

Finally, the unit of measurement entered on the left is considered the “primary” unit, so when the conversion results are displayed, they are displayed using that unit. Which is fine, but I’d like a button to “swap” the results so that I could see them in either unit, especially in cases where I entered “feet” on the left and “meters” on the right, realizing after the fact that I really wanted the end result displayed in feet.

All in all, I really like this little app. It does one thing, and does it well. Whether or not it actually “pays for itself with the money you’ll save,” as Ilium’s A2O product page proclaims proudly, it sure does save a lot of time on the pocket calculator—and a lot of head-scratching to boot.