A lovely big package appeared on my front doorstep last week, and in it was an even lovelier 2 terabyte RAID 5 disk array from our friends at Micronet/Fantom.

Briefly described, the RAIDBank4 is a 4.85 x 6.5 x 9.1 inch box which holds four SATA hard drives (in this case, there were four decent quality Western Digital 500 GB drives). Micronet bills this unit as the “world’s smallest RAID”. While I don’t know this to be true, I don’t think it could get much smaller. 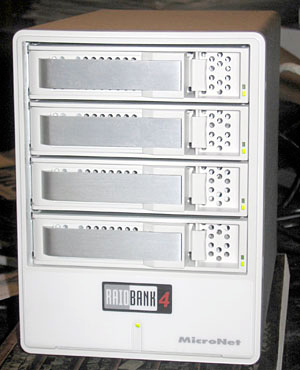 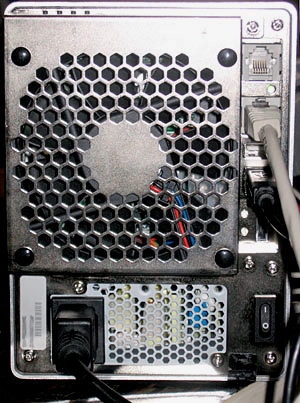 It comes with all the cables you need: a CAT-5 ethernet cable which is used to configure the disk array via your web browser, a power cord, a USB cable, and an eSATA data cable. It also comes with a PCI-X eSATA Host Bus Adapter card which, unfortunately I could not use. Finally, there’s a CD with the manual, device drivers for Mac and Windows machines, and documentation on the eSATA Host Adapter card. You can also configure the RAIDBank4 with the back panel switches, but believe me, the web browser method is much better, and provides much more information about the configuration and health of the disk array.

Normally, the vendor would have you use this device with a Mac Pro-class machine with either a PCI-X or a PCIe socket on the motherboard. Unfortunately, my G5 PowerMac was the model offered just before Apple offered a model with a PCI-X socket, so I was unable to test that part of it, which is really too bad, because with an eSATA Host Bus Adapter, this box is likely to be a real screamer. My fault for not communicating sufficiently with the folks from Micronet.

The good news is that it can work nearly as well with just a USB connection to your computer, which should give you throughput that is close to the eSATA interface, but at the expense of using more of your computer’s horsepower to run that connection.

The drives are automatically configured for RAID 5. RAID (Redundant Array of Inexpensive Drives) is a great way to go, and if you have more than two disks in your array, RAID 5 is definitely the way to go. What RAID 5 gives you is near total data security. If one drive goes out, it can be replaced with a like drive and through the magic of parity data, the data that was on the defective drive is regenerated and it’s as if nothing ever happened. The RAIDBank4 can be configured as RAID level 0, (0+1), 3, 5, Span, JBOD (just a bunch of disks), and disk passthrough. I’m not going to even begin to try to explain all these. The excellent user manual (provided as a PDF on the included CD) does a good job explaining all of these varied RAID systems. Suffice it to say that if raw speed is more important to you and you are not worried about losing your data if a drive fails, you can format this array using other RAID configurations.

Because of the way RAID generates parity information for data recovery, count on losing a sizable chunk of your usable disk capacity. In other words, if your RAID 5 disk array has four 500 GB drives, as my test unit did, you will only have about 1.5 terabytes of real world storage available to you. The remaining 500 GB is used for data recovery, if one of the drives fail. A small price to pay for the security protecting your data.

Some may ask, “why do I need the complexity of a RAID array?” Well, in the age of terabyte drives, huge collections of photos, music, and other media, there is no easy or convenient way to back it all up. By using a RAID 5 array (and I also include disk arrays like the Drobo in this category), you can be reasonably assured your data will not be lost if you lose any single drive. If you lose more than one drive at the same time, well, there’s not a whole lot to be done, though that is a really, really rare scenario. More to the point, if you lose one drive, the RAID controller regenerates the missing data on the fly (albeit m ore slowly) until the defective disk can be replaced and the missing data can be permanently restored to the replacement disk. Another reason is speed. Because of the way data is written to the array using “striping” (writing small chunks to each drive, sequentially), the best throughput is available to you. This can be very important to people doing video production work, especially if you are working with HD video, which can require 30-50 megabytes per second at a sustained pace, if storing HD video from a compressed 1080p stream (about 40 megabytes per second). Very few disk arrays, this one included, can deal with an uncompressed 1080p stream, which demands hundreds of megabytes per second throughput, but there are purpose-built (read that as expensive) disk arrays just for that application. I doubt if a home or small business user is going to be mastering high bandwidth video. Another application of a device like this is as a file server–ideal if you have an older PowerMac with a PCI-X or PCI-E bus connector. Just activate file sharing, share up the disks you want available on your network, let others on your network back up to your RAIDBank4 array, and now you can share your array with other users, backup systems, and feed DVD quality video to your home media center.

I’m still waiting for holographic storage that will permit storage of terabytes, if not petabytes of data on a single piece of media. For now, though, this is probably the best way.

Assembly took only a few minutes. The hard drives were already installed in their special carriers, so they only needed to be unwrapped and plugged into the main housing. I plugged the ethernet cable into an open port on my router, connected the USB cable to the last open connector I had available (for disks, it’s always preferable to connect directly to a USB or FireWire connector, versus connecting through a hub–it will always be faster if connected directly). When I powered it up, I thought, OMG, Hurricane Wilma has returned (I live in South Florida)! Not to worry. The fans only went up to hypersonic speed for about 30 seconds, during the initial power-up, and hasn’t made any rude noises since. You can hear the RAIDBank4’s fans during normal operation, but it isn’t at all annoying. I wouldn’t use it in the living room plugged into my media server (more later), but I could easily live with it in my computer room. 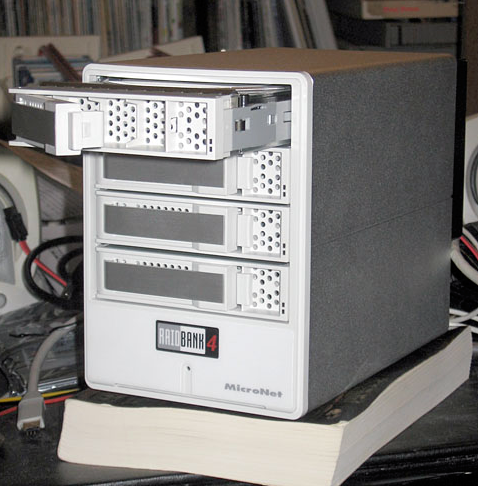 I had a little trouble the first time I tried to mount the drive. I probably should have just rebooted everything, but you know me…do it the hard way. Like most technical writers, I almost never read the manual unless I’m in real trouble. Big mistake. This is an object lesson for all of you: RTFM (read the fine manual)! Anyhow, I initialized the array, which was about two terabytes out of my life. I think it took 2 or 3 hours to fully format the array, and another 30 minutes or so to do the final partitioning and formatting. It then mounted like a champ. It sensed my network, used the IP address assigned by my router, and allowed me to examine and set up the drive’s many features with my web browser. 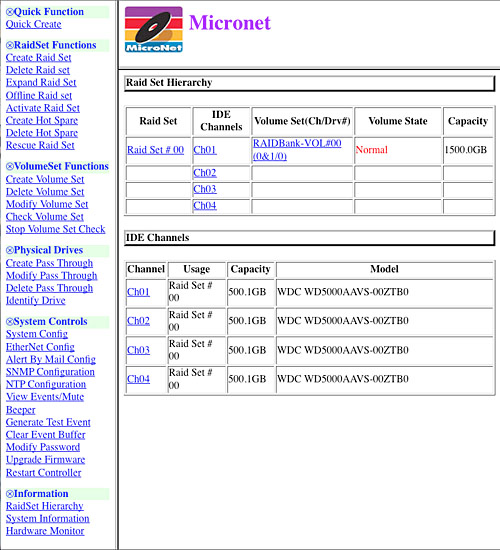 The only real odd thing about this disk array is how it behaved with disk performance measuring utilities, such as the ones built into ProSoft Engineering’s Drive Genius 2 application. Basically, I launched the app, the drive unmounted, and that was all she wrote. It usually required that I reboot my computer to remount the array. I don’t know if this has anything to do with the fact that I could not test this array with the eSATA connection. All I could really do to get some kind of benchmark was to take a stopwatch to the process of moving a 10.7 GB (11,490,399,279 bytes) folder of MP3 files, first to a Seagate 500 GB external USB 2.0 drive, and then to the RAIDBank4. It took 17 minutes, 14.82 seconds, by my calculations, about 11.1 megabytes/second to move the files to the RAIDBank4. It took 18 minutes, 26.68 seconds, again, by my calculations, about 10.38 megabytes/second to transfer files to my external Seagate. This gave me a good idea of the write speed. Then I did the reverse, copying this same folder back to my G5 PowerMac tower’s new 750 GB 7200 RPM Seagate Barracuda SATA internal drive.

If my figures are at all valid, it shows that when using just the USB 2.0 connection, the RAIDBank4 is marginally faster than a single external drive. While I can’t measure it because my G5 Tower didn’t have the newer PCI-X connector, based on various published reports, data transfers over eSATA are roughly 3-4 times faster than the same ones over USB 2.0, plus you get the data security of RAID 5.

In summary, this is a terrific drive that I was ill-equipped to fully test. What I was able to test was impressive. It was a little faster over a USB 2.0 connection than over a single disk USB 2.0 drive. It can be configured and maintained with a really neat web interface, and is quite likely a real screamer when used with a Mac Pro that has the appropriate PCI-X or PCI-E socket on the motherboard. I’m a little concerned that I was not able to run some pretty common benchmarking tools, because I suspect a lot of people will buy this array and just use it as a USB 2.0 device with the goal of storing lots of data more safely than with a single external disk solution, and are willing to pay a hefty premium to do so. An argument can easily be made that this is an expensive way to store data, that you can buy a 1.5 to 2 terabyte drive in the $200 neighborhood. Well, how valuable are your files, and what would it cost to recover, if you could recover, that data?