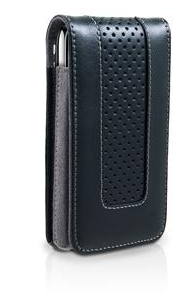 Marware has more than one iPhone case up its sleeve. Marware’s C.E.O. FlipVue is a another well designed leather case for your iPhone 3G that you might want to consider taking a look at for daily use. Marware had already produced a version for the original iPhone that was previously reviewed by David Weeks and since the arrival of the iPhone 3G, a newer model appeared on the scene.

Just as with Marware’s C.E.O. Sleeve, the FlipVue is made of Nappa leather that provides a holster-type case that you slip your iPhone into and the flap comes down and is held in place by two small sections of velcro and provides cover over the front of your iPhone. The side elastic also provides the grip to hold your phone in place besides the drop down flap. In appearance, both the Marware C.E.O. Sleeve and the FlipVue are identical, with the FlipVue having the flap to cover the front of your iPhone. In the previous version for the original iPhone, there were apparently some complaints of accessibility to iPhone items that Marware has taken care of in this version. Your earphone mini-jack, speaker, volume control, mike and dock connector are all readily accessible.

In my tests of the case, there was absolutely no issue with controlling volume, listening to music via the speakers or being able to plug in my earphone mini-jack. The one thing that I did discover was that when you have the earphone mini-jack in the iPhone, you’re going to have an issue attempting to take a picture as the jack shifts the camera lens off to one side that would result in approximately one-half of the lens being covered by the case.

The case sits in place and doesn’t move around on the belt. The only accessibility issue that I encountered during my use was while sitting in my car and a call came in as it was a bit of a hassle to flip the flap and successfully remove the iPhone in a timely manner. Yes, I could solve that problem by just placing the case in the center console and that would take care of accessibility or totally removing the case off of my belt when a call came in. However, that defeats the whole purpose of having accessibility to the iPhone and still having it on your person. (Yes, I know that I could have the supplied earpiece in place and not have that issue but not everyone carries it around with them.)

Pro: Easy to use, good looking iPhone case. Leather composition provides a good solid feel to the case, case is in close to the body. The flap provides more coverage on the iPhone from the elements and other flotsam and jetsam floating around one’s person.

Cons: Just as with the Marware C.E.O. Sleeve, the only minor problem that I had was sliding the clip onto the back of the case. It took a minute or two to seep into the brain that you have to separate the movable section from the non-moving part of the clip by inserting your finger between the two sections and then slide the non-movable section into the clip holder on the case itself.

The flap itself does present some interference when you’re trying to answer a call but perhaps with more practice one can become more proficient in accessing the iPhone.

Design and style wise, the C.E.O. FlipVue is great… but the flap issue and the positioning of the openings for the earpiece and camera lens just brings it down a bit in the ratings from its companion case, the Marware Sleeve.