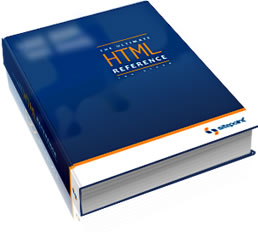 For over ten years, I have enthusiastically promoted Dave Taylor’s “Creating Cool HTML 4 Web Pages” book as my favorite HTML reference book. Its organization, code examples, and writing style are first-rate. I think I may have found a worthy replacement in Ian Lloyd’s new “The Ultimate HTML Reference”, though I say this with the understanding that this book is really intended for the hard-core HTML coder who needs a handy reference for one of those weird commands that didn’t come immediately to mind. This can be a really useful reference for the super-advanced coder, though beginners can get a lot out of this book, too.

Unlike Taylor’s book which was laid out in a format that permitted the user to start with simple tasks and build on them, The Ultimate HTML Reference is organized by HTML elements (Structural Elements, Head Elements, List Elements, Text Formatting Elements, Form Elements, Image and Media Elements, Table Elements, Frame and Window Elements, and Common Attributes) and the attributes within the elements (for example, Chapter 4, List Elements, is divided into the various attributes like dl, dd, dt, dir, li, menu, ol, and ul). It even provides a little instruction for basic Javascript commands like onkeydown, onmousedown, ondblclick, and others.

One of the appendices covers deprecated elements – that is, those elements and attributes that are no longer supported by the newest HTML and XHTML standards (but most browsers still permit their use, just the same). Another covers some of those special (read that annoying) proprietary and nonstandard elements (remember the “blink” command in Netscape–that only worked in Netscape?).

The organization of the book makes it very easy for individuals with at least some HTML coding experience to locate the elements and attributes they need, and describes in just enough detail how to apply them. While there aren’t as many examples as I might like, there seem to be enough for most users. What I do like is the compatibility chart that goes with each attribute. The chart displays compatibility (Full, Partial, and None) of the attribute against several versions of the most currently popular browsers: Internet Explorer, Firefox, Safari, and Opera.

Within the book’s first 25 pages, readers receive preparation for upcoming changes to the HTML standards, as XHTML (eXtensible HyperText Markup Language, a hybrid of HTML and XML–eXtensible Markup Language–a highly structured, rules-based markup language) begins to take over. XHTML tightens up some of the structuring that was missing in HTML, which makes the code much more readable and easier to modify as needed, and if you need to transition to full XML (for things like content management systems), much of the work has already been done. HTML 4.0 and earlier code, in comparison, can be really sloppy, but it still renders just fine in most browsers. For example, in HTML 4.0, capitalization is optional, and line endings don’t need to be terminated in a formatting attribute, like “</p>”.

XHTML also imposes more stringent rules on quoting. Every attribute value must be quoted. For example, quoted attributes like class=”gallery” are mandatory in HTML 5.0 and newer. HTML 4.0 code permits code like class=gallery.

The author takes pains to differentiate the older HTML vs the new XHTML, and if you haven’t started coding in XHTML, be prepared to break newer browsers on their way to a computer near you. Not today, but maybe a year or two (or three) from now, the older HTML formats will begin to disappear as XHTML becomes the new standard. If you want to read more about the differences between HTML and XHTML, check this page out. But I digress…

What surprised me were the number of new attributes and elements that I had not used before that are a part of XHTML as well as newer releases of the HTML specification. It turned out to be very useful in a recent office project where we converted one of our product manuals to HTML–a project that had plenty of tricky points to deal with.

What this book only briefly touches is Cascading StyleSheets (CSS), which are used to apply more advanced and creative formatting to web pages. That said, CSS is completely out of scope to this discussion, though it may be good to know that the same publisher, Sitepoint, has a companion volume, “The Ultimate CSS Reference“, by Tommy Olsson and Paul O’Brien, also $44.95. I was so impressed, I bought a copy for myself. I’ve already discovered that The Ultimate CSS Reference is equally valuable to a web programmer’s arsenal of reference materials. A Javascript book from Sitepoint is also in the works.

A companion website contains everything in the book, fully hyperlinked and searchable, as an additional valuable resource. It’s free, to boot. The free companion site to the CSS reference book can be accessed at http://reference.sitepoint.com/css.

What can I say? This book replaced Taylor’s book as my primary HTML reference at home and at the office. It’s well worth the 45 dollar price-tag. I can only find fault with the fact that it doesn’t have enough chunks of sample HTML and illustrations of how the HTML will render. Most of my loyal readers (?) know that I’m pretty tough with my ratings, but taking that really small negative into account, I give this book the MyMac Magazine rating of 4.5 out of 5.