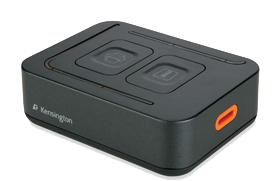 Just as it was tough sharing your popcorn–or your favorite toy–when you were a kid, it’s often tough to share USB devices between multiple computers without constantly plugging and unplugging cables. Kensington’s ShareCentral™ series of devices aim to make sharing printers, hard drives, memory cards and virtually any other USB peripheral a tad less painful, by enabling one-button access to any connected device from any two Macs or PCs.

The ShareCentral series comes in three flavors, according to the number of USB peripherals they’re capable of sharing. The ShareCentral 1 ($39.99) shares one device between 2 computers, while the ShareCentral 2 ($59.99) shares 2 devices. I’ll let you do the math for the ShareCentral 5 ($79.95). Each comes with a power adapter and the necessary USB cables to connect two computers to the unit, helpfully color-coded orange and white in an attempt to head off any possible confusion that might be encountered during the connection process.

The rear panel of the unit provides one USB “A” connection for each peripheral it’s capable of supporting. Since I was testing the ShareCentral 2 model, there were two USB ports to which I could connect my devices: my trusty but dated Olympus digital camera, and an 80 GB USB hard drive. I connected the ShareCentral to my 24″ iMac and my MacBook prior to connecting my peripherals, and plugged in the AC adapter. On both Macs, the Keyboard Setup Assistant appeared instantly; it seems OS X recognizes the ShareCentral™ as an input device. I dismissed the assistant on both machines and it did not reappear in the course of my testing.

With my USB drive and camera connected, the unit worked as advertised, allowing me to mount both the camera’s memory card and the hard drive on either machine with one button press. Kensington thoughtfully provides alternate button covers with icons of typical USB peripherals, so instead of pressing button #1 or button #2, you can swap them for buttons with printer, scanner or hard drive icons, in order that you don’t have to ponder too deeply about which peripheral is cabled to port #1 and which is on port #2. The unit seemed to switch from one Mac’s USB bus to the other quite rapidly, as there was very little “lag” between ejecting the devices from the first Mac, pressing the button to switch them over and seeing them mount on the second Mac.

That being said, I think this device still has a few rough edges in a number of areas. First off, the top panel on which the switch buttons reside has orange LED indicators to show which device is currently switched to which Mac or PC. But for some reason, the LEDs for computer #2 occupy the entire left and bottom border of the panel, while the LEDs for computer #1 occupy only the top of the panel. Further, neither indicator is labeled as computer #1 or #2, so the user is forced to guess which is which based solely on the relative position of the indicators. It would have made far more sense to put #1 and #2 LED lights on each button, so that it would be clear at a glance which computer each of the peripherals was currently switched to. 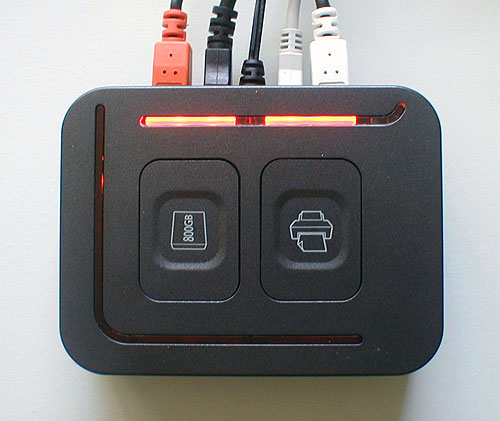 Using the included “custom” buttons helps the user remember which button controls which peripheral (as long as your peripheral device is a printer, scanner or USB hard drive). But there’s nothing to assist one in divining which strip of LED lights represents computer #1 or computer #2; can you guess which computer is connected to the printer and which is connected to the USB drive? Answer: They’re both connected to computer #1. How do I know that? I had to go back to the instruction sheet, and then look at the connections on the back of the device one more time, and even then I wasn’t 100% sure.

My primary beef, however, is with the instructions–or lack of same. Although there was no shortage of 4-pt. legalese on the included instruction sheet, the setup and connection info itself did not provide a single word of explanation–information on setup and use was provided solely in the form of line drawings with supporting arrows and icons. I could certainly see many a user becoming befuddled over how the connections are supposed to be configured, especially given that the computer #2 connection is located on the left side of the device and computer #1 on the right, which to me seemed backward from the get-go, and when combined with the bizarre configuration of the LED indicators, only added to the confusion created by the lack of any written explanation.

Step 1A of the instructions did indicate that the user should insert the provided CD, which I assumed contained a PDF manual and possibly driver software. I was half right–there was no manual in sight, but there was a folder labeled “MacDriver_x86” which contained the ZIP archive “Kensington_Share_Central.zip.” Again, no Read Me, no PDF, no indication whatsoever as to what I should do with this file. Assuming it to be a driver for the device, I double-clicked to uncompress it, upon which it created a file on my desktop called–not surprisingly–“Kensington_Share_Central.”

The Finder’s “Get Info” window revealed this file to be a Universal application, so I went for broke and launched it. No Dock icon appeared, nor any change to the menu bar indicating that the software was running. A quick check via Activity Monitor showed an active process called “Share Central,” but there was no way to know what it was or was not doing, and no way to quit it. If it actually was a driver for the ShareCentral, or something else entirely, I’ll never know. Whether or not it had anything to do with the “Auto/Manual” switch I discovered on the bottom of the unit will remain another of Life’s Great Mysteries, as the instructions did not make even a graphical reference to this option. 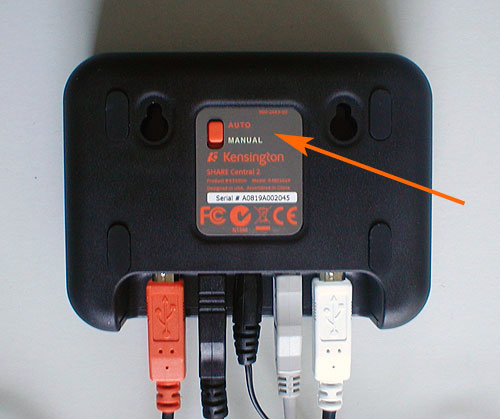 The mysterious “Auto/Manual” switch on the ventral surface of the ShareCentral 2. What does it do? Should I leave it on AUTO or switch it to MANUAL? Can I switch it while the devices are connected, or will that create a rip in the fabric of the space/time continuum? Will Luke and Laura ever get back together again? Don’t leave me hanging like this…

I’d like to give the ShareCentral high marks for doing what it claims to do, but the woefully inadequate attempt at an instruction sheet, the confusing layout of the device, the lack of any electronic manual, the mysterious “is it a driver or isn’t it” software on the included CD, and the even more mysterious and completely undocumented auto/manual switch on the bottom of the device all point to a lack of care and preparation on Kensington’s part. For my $60 I expect a more polished product, with functioning driver software and far better documentation than Kensington has chosen to provide.

Sure, it’s nice to share, but I feel that anyone who makes use of this device will share my opinion that Kensington has some more work to do here in order for the ShareCentral to earn its $60 price tag.