Need an FM transmitter so you can play songs from your iPod through your car radio? How about one that charges your iPod AND transmits data to RDS (read on to discover what â€œRDSâ€ is all about) enabled car radios. Look no further than the iTrip AutoPilot from Griffin Technology.

I wanted to take the iTrip AutoPilot (IA) out for a spin because I have a new 2007 automobile (well, 8 months old now) that has an RDS (Radio Data System) enabled radio. The thought of being able to see what my iPod was playing on the LCD screen in my car was very exciting. Read on to find out how well this works.

The IA is used like any other FM transmitter on the market. You plug the unit into a cigarette lighter or power port in your car, tune in a frequency on your radio that has no music, tune in the same frequency on the IA, then plug in your iPod and the music plays out of your car speakers. However, the IA has a few tricks up its sleeve.

First, the IA will automatically scan for empty frequencies and display them on a very easy to read LCD. This â€œSmart scanâ€ technology is supposed to find the three â€œclearestâ€ frequencies and places them into the LCDâ€™s presets. In practice, Smart scan found three frequencies that still had some distant radio stations transmitting through them. However, this isnâ€™t a problem because you can manually tune in any frequencies you desire.

I like the fact that you can set up three preset stations. If youâ€™ve ever used FM transmitters while driving medium to long distances, you know that the frequency you picked at point A might have a radio station transmitting at that frequency when you get to point B. Being able to simply push a button to change the station is a nice feature.
I found the transmitter strength to be a bit weaker than I liked. I had to move the cable around a bit to get really good reception. The IA comes with a nice long cable, which I found to be a plus. 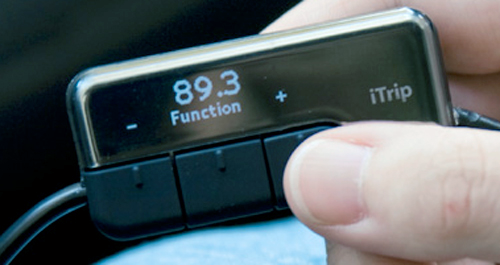 Another plus is the IA power-plug. This innovative plug glows green if your iPod is charged, and red when itâ€™s not. The power plug also acts as a controller. Press the plug in the middle and you can pause or restart your iPod. Press the edge to skip to the next song, or the opposite edge to play a song over or skip back. I liked this controller quite a bit, however, in my car I donâ€™t have a cigarette lighter, or power port, right on my dashboard. I have a power port next to my glove compartment alongside the console, so I canâ€™t see the power plug at all, rendering this feature useless for me. I wish Griffin has placed a controller near the LCD instead. 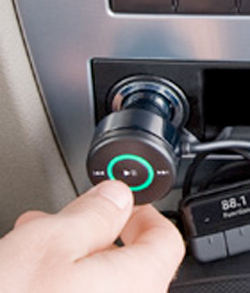 RDS (Radio Data System) enabled radios show data transmitted by radio stations. When Iâ€™m using my radio, I can see the station call letters, and sometimes words like, â€œClassic Rock,â€ or â€œCountry Hits,â€ will appear. The IA advertises that the RDS feature will show the current song info when you iPod is plugged in and transmitting. After plugging in the unit I watched the screen in my dashboardâ€”and watchedâ€”and watched. Nothing appeared? I was using my old iPod mini and thought perhaps the iPod itself was too old for this. (The IA supports ALL past and present iPods including the Touch and iPhone) I went and borrowed my sonâ€™s new 3G iPod nano, but still nothing showed on the screen.
Then I picked up the transmitter unit, the one with the station LEDs, and held it up in the air, in front of the radio, suddenly words began to scroll in one line across the screen. If the song had more than ten characters, it would break up the name. I would see â€œBlinded by t â€œ then the past text would scroll off and, â€œhe lightâ€ would appear. Not exactly what I was hoping to see. The RDS worked the same way with my mini as long as I held the transmitter close to the radio. I was very disappointed with both the RDS data display and the fact that I had to hold the transmitter up to make it work.

This is a capable FM transmitter with some nice features that may work very well for those with an automobile that has a power-port or cigarette lighter port close to their radio and easily accessible from the drivers seat.