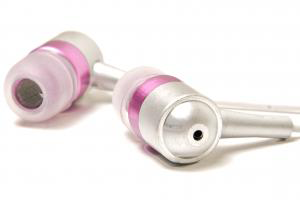 Before I start this review I should say that I’ve been quite satisfied with the stock headphones that were shipped with my iPod nano. Perhaps my expectations for a unit costing $14.99 to $29.99 were not so high, but for such a small device I wasn’t expecting $100-plus Bose power, only a set that would give me clear, crisp highs, non-muddled mid-ranges, and reasonable bass sounds.

I was given the assignment to review the pink GrooveAtomic earphones. Before they had even arrived, I went ahead and Google’d away. That’s right; I wanted to see what other had to say about the GrooveAtomics. That is definitely a reviewer’s sin. (A set of identical black “GrooveJets” unit arrived unexpectedly, an extra surprise)

Nearly all reasonably objective reviewers said basically the same thing, “powerful bass,” “lightweight,” “stylish design,” “comfortable during long sessions…” yet the upshot was “muddy mid-range, overwhelming bass, lack of crispness.” I would add that they’re pretty good noise canceling units and, for me, a good fit.

Well, I searched my iPod for some tunes that would sound good on the GrooveAtomic. I went for Led Zeppelin’s “D’Yer Mak’er.” There’s not much crispness to that song, just balls to the wall rock’n’roll and plenty of mid-range and bass. But it was so muddled on the GrooveAtomic that I thought I was using a late-’70s all-in-one-speakers-unit-it even sounded fuzzy. So I tried “The Song Remains the Same” and it was better. Mid-way through that song I switched to the iPod stock unit. I was temporarily fooled. The stock unit was just clearer. It’s just what most of us want.